Supercapacitors, also called Ultracapacitors, double-layer capacitors, or electrochemical capacitors, are a type of energy storage system attracting many experts in recent years. In simple terms, they can be imagined as a cross between an ordinary capacitor and a battery; still, they are different from both.

Before we get into the nuances of whether Supercapacitors can make a difference on their own in terms of how energy can be stored in the future, it’s worth knowing more about how they work and how they are different from a lithium-ion battery.

Supercapacitors and batteries, they are both storage methods. If we look at lithium-ion batteries, they rely entirely on chemical reactions. They consist of a positive and negative side, technically called an anode and a cathode. These two sides are submerged in a liquid electrolyte and separated by a micro-perforated separator, allowing only ions to pass through. During batteries’ charging and discharging, the ions tend to flow back-and-forth between the anode and cathode. While this ion transfer process occurs, the battery gets heated up, expands, and then contracts. These reactions gradually degrade a battery, resulting in a reduced lifespan of batteries. However, a significant advantage of battery technology is that it has a very high specific energy or energy density to store energy for its use later. 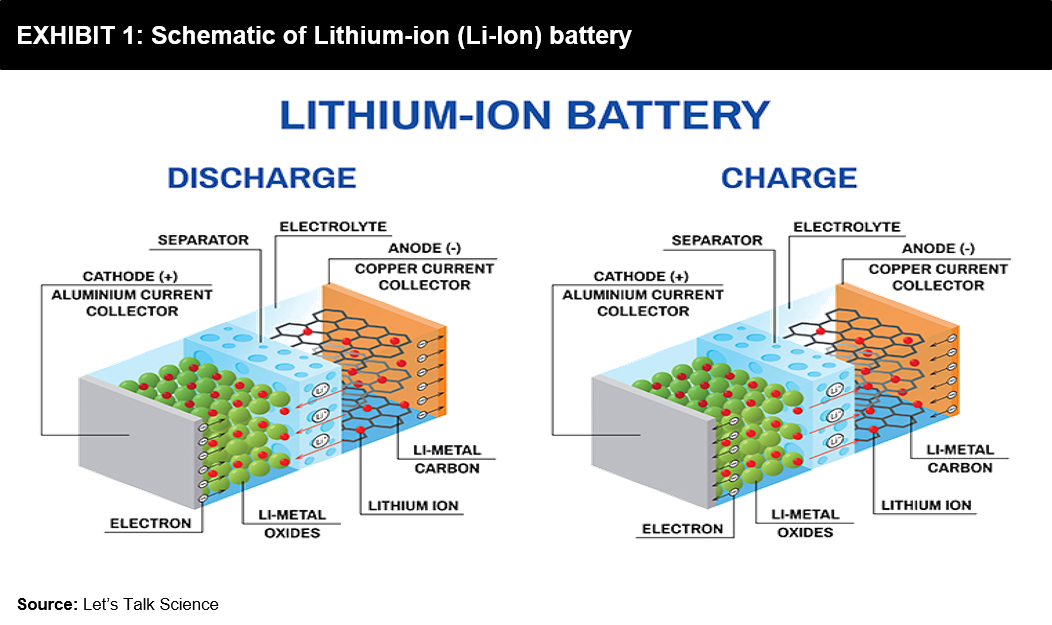 But Supercapacitors are different; they don’t rely on a chemical play to function. Instead, they store potential energy electrostatically within them. Supercapacitors use dielectric or insulator between their plates to separate the collection of positive (+ve) and negative (-ve) charges building on each side’s plates. It is this separation that allows the device to store energy and quickly release it. It basically captures static electricity for future use. The most significant advantage of this is that a 3V capacitor now will still be a 3V capacitor in 15-20 years. In contrast, on the other hand, a battery may lose voltage capacity over time and repeated usage.

Also, unlike a battery, they have a higher power throughput, which implies it can charge and discharge in a fraction of the time. Still, they have a very low specific energy as compared to batteries. Supercapacitors are best suited for very small bursts of power.

The whole concept of a “Supercapacitor” is not a new thing at all. The first Supercapacitor was created by GE (General Electric) in the year 1957. Standard Oil, accidentally in 1966, discovered the double-layer capacitor when working on fuel cells. Still, it wasn’t until the late 1970’s that the Japanese company, NEC, began commercially offering the first “Supercapacitor” for computer memory backup.

We’re at a point wherein applications of Supercapacitors are at the beginning of exploration. In general, Supercapacitors have been found to have the biggest potential for application in hybrid-transportation (hinting from the Tesla – Maxwell acquisition).

Peugeot-Citroen, Toyota, Mazda, and even Lamborghini have all released models of vehicles that use some combination of Supercapacitors and conventional Li-Ion batteries. Cars like Toyota’s Hybrid-R concept and Lamborghini’s high powered Sian are using Supercapacitors for a precise role. For example, they have used it in power-regeneration systems during the deceleration of a car. In simple words, when cars are slowing down, energy generated from this action is stored by onboard Supercapacitors and is later used for acceleration. Results in saving batteries for less strenuous actions than acceleration and deceleration. It takes advantage of a Supercapacitors’ superior power throughput.

Interestingly, Elon Musk had recently stated that Tesla’s acquisition of Maxwell would have a significant impact on batteries. It was concerning an announcement from Tesla regarding their acquisition of the San Diego-based Ultracapacitor and battery company Maxwell for over $200 million. It wasn’t clear if it was for the company’s main business, Supercapacitors, or its latest battery technology IP, like a new dry electrode technology for battery cells.

A fantastic example can be seen in Switzerland on how effective Supercapacitors are. A fleet of buses is exposed to charging stations at various stops along their daily commutation route. Just 15 seconds can top the energy-charge off, and only a few minutes would suffice for a full charge. With frequent top-offs, it makes up for the lack of energy density and storage. And because Supercapacitors draw a lower current for a few minutes at a time, this puts less stress on the grid.

Why Supercapacitors are gaining a lot of interest, and how does it compare with Lithium-Ion Batteries, for example?

The answer to this question can depend a lot on the applications they can be used for. There are indeed a few clear advantages and disadvantages of each technology. As mentioned earlier, batteries have a much higher energy density than Supercapacitors. 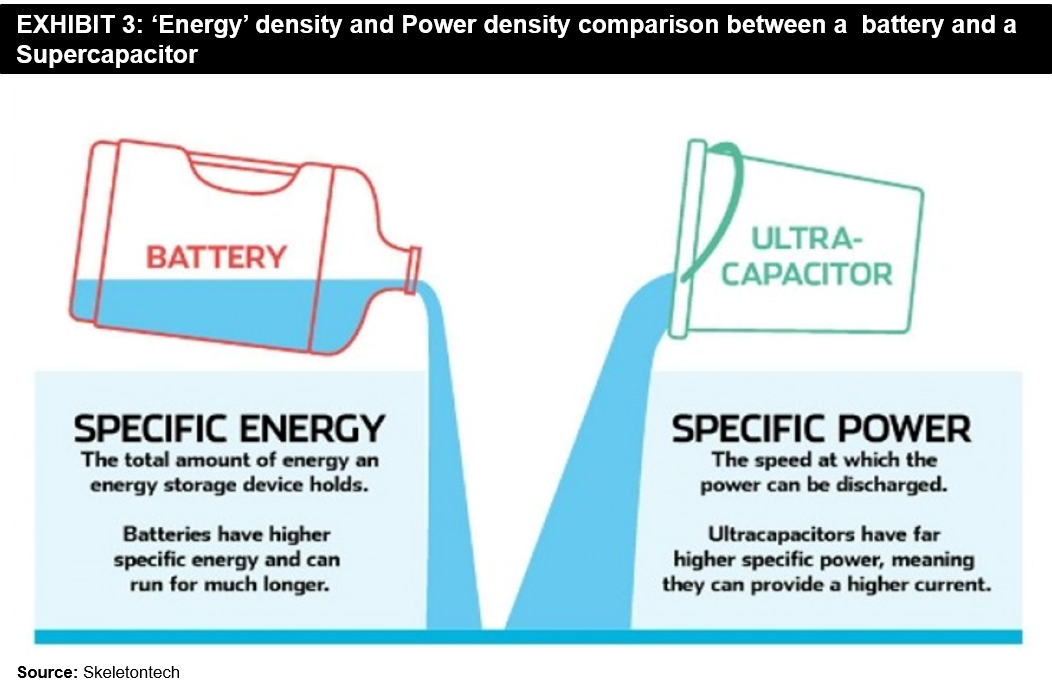 It means that batteries are more suited for higher energy density applications, for example, an application where a device needs to run for long periods on a single charge. On the other hand, Supercapacitors have a much higher power density than batteries. It makes them ideal for high-drain applications like powering an electric vehicle. Please refer to the below exhibit for a comparative view.

Supercapacitors also have a much longer lifespan than batteries. A regular battery can handle around 2000-3000 charge and discharge cycles, while Ultracapacitors can usually sustain more than 1,000,000. It can represent considerable savings in materials and costs. 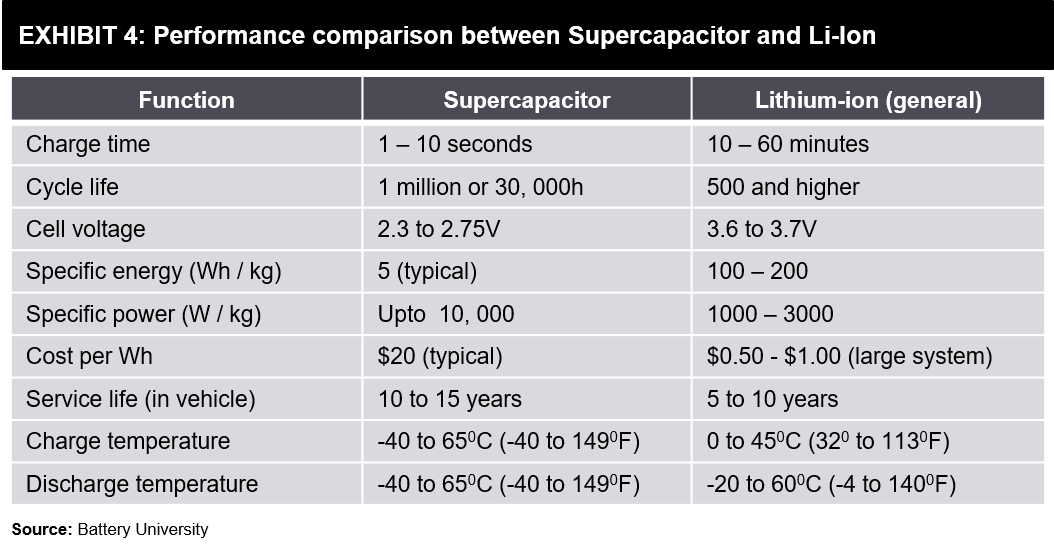 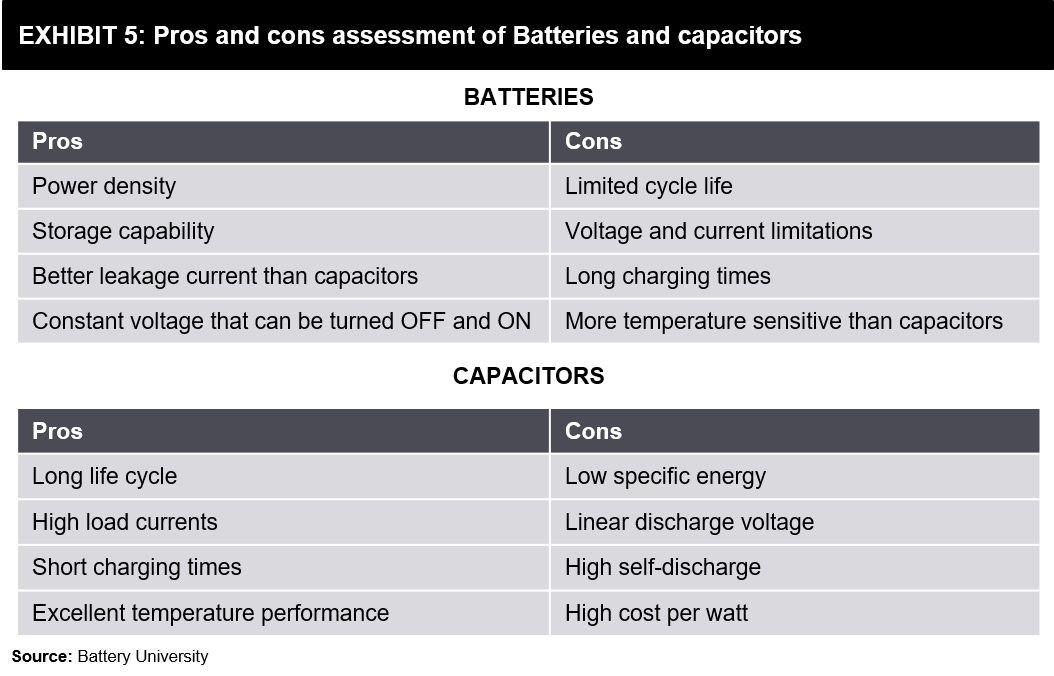 There might still be some common confusion in terms of power-storage. Exhibit 6 shown below can clarify how these two technologies compare on power density and energy density characteristics, including some other energy storage forms. 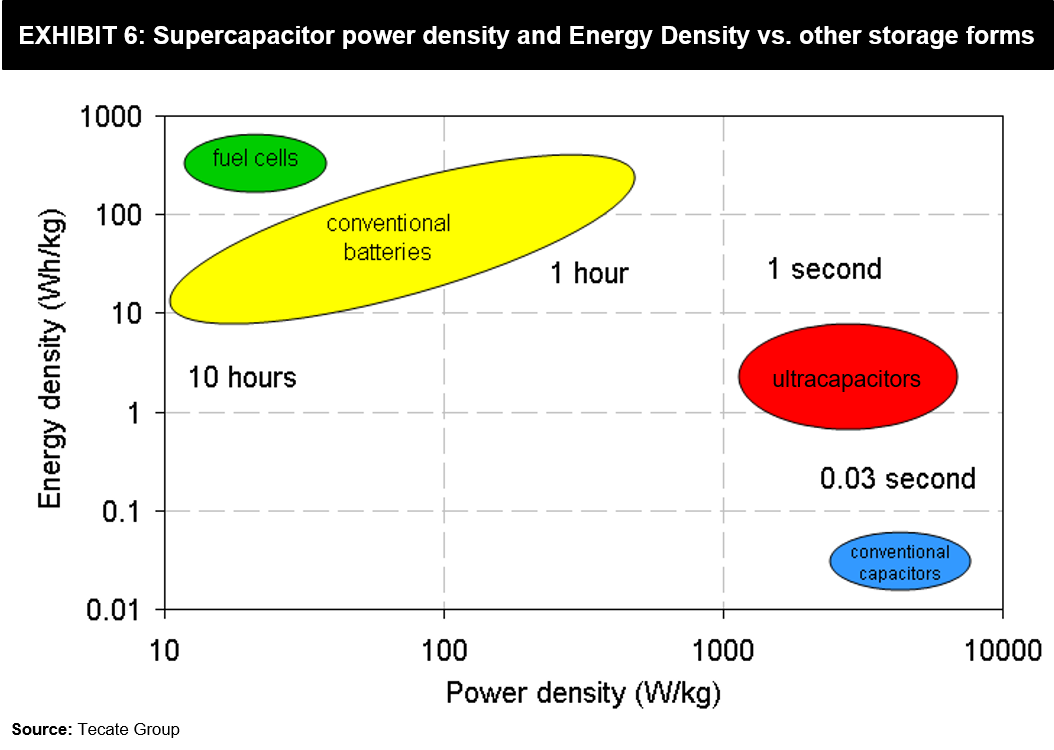 Exciting times ahead for Supercapacitors in the future – Keep an eye!

With the above comparisons and all the examples of Supercapacitors’ various applications under exploration by numerous OEMs, there doesn’t seem to be any mass movement towards replacing batteries with Supercapacitors. So, why is all this excitement?

Supercapacitors are superior to traditional capacitors due to their ability to store and release energy; however, they haven’t been able to replace the function of conventional Lithium-Ion batteries. It’s mainly because Lithium-ion batteries pack a punch that Supercapacitors can’t, in the form of specific energy or energy density (Lithium-ion ~250Wh/kg vs. Supercaps ~20 Watt-hour/kg).

Based on recent research in Supercapacitors, a breakthrough could be achieved from Graphene-based Supercapacitors, leading to significant advances in Supercapacitors. A study at the Queensland University of Technology and Rice University resulted in two papers published in the Journal of Nanotechnology and Power Sources. Researchers at these universities proposed a solution consisting of two Graphene layers, with an electrolyte layer between them. This resulting film is strong, thin, and can release large amounts of energy in a short time. These factors are a given-it is a Supercapacitor after all. This study makes this study unique and interesting because the researchers suggest that the new, thinner Supercapacitors could replace bulkier batteries in future electric vehicles.

Even companies like Skeleton Technologies, which have extensively focused on Supercapacitor technology, admits that hybridization of Lithium-ion and Supercapacitor driven systems could propel electric technologies into the next era.

Study’s co-author Jinzhang Liu says that “In the future, it is expected that Supercapacitors can be modified to store more energy than a Lithium-ion battery while retaining the ability to release its energy up to 10 times faster. Meaning the Supercapacitors in its body panels could entirely power the car”. He goes onto add that, “After one full charge, this car should be able to run up to 500km (310 miles) – similar to a petrol-powered car and more than double the current limit of an electric car.” 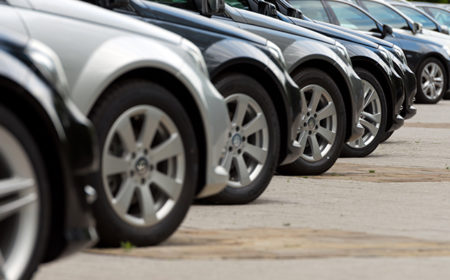