Traditionally to increase the shelf-life of the food heat was utilized to kill foodborne pathogens such as bacteria, viruses, and parasites. Then some researchers developed thermal processing techniques to increase the food shelf-life, which include pasteurization, high-temperature sterilization, drying, and evaporation that help in decreasing the microbial growth and improve the stability of the foods. But thermal processing has certain limitations such as it can destroy the important as well as sensitive constituents of food like volatile compounds, nutrients, and flavors. Thermal processing also has a high operating cost. Furthermore, the consumer’s demand for safe and good food is increasing day by day. Due to all these challenges, food professionals and scientists have shifted their thoughts toward the development of non-thermal processing technologies to overcome the previous challenges in food processing.

Non-thermal food processing is safe, green, and eco-friendly. It can be carried out at room temperature thereby, decreasing the damage to essential components of the food. The process involves the deactivation of microbes on food by using little amount or no amount of heat. Furthermore, the technologies of non-thermal processing can be utilized for handling all kinds of food like fruits, vegetables, pulses, spices, meat, fish, etc.

Some non-thermal technologies include:

The matter is available in three states such as solid, liquid, and gas. Plasma is referred to as the fourth state of matter. A plasma state is obtained when the ionization of a gas molecule takes place. Treatment by utilizing plasma is divided into two phases such as thermal plasma and cold plasma (non-thermal). In the case of non-thermal cold plasma, it works in the temperature range between 25–65°C. The composition of plasma consists of combinations of ions such as UV photons, electrons, reactive species, and charged elements. The reactive species, which are involved are caused by oxygen like O3, nitrogen like NO2, and water like H2O2. The reactive species formed due to oxygen are found to be most effective against microbial cells, resulting in the death of the microorganism. Due to the nature of the plasma, it has a wide variety of applications in chemical engineering, textile, electronics, surface coating, pharmaceuticals, and food sectors. In the case of food sectors, they can be utilized for eliminating microorganisms from food. As it does not involve high temperature for microbial inactivation there will be no thermal damage to the heat-sensitive food material. In the destruction of microbial cold plasma destroy their microbial cells including their DNA. The plasma can be developed by utilizing a few methods such as radiofrequency plasma, gliding arc discharge, dielectric barrier discharge, and microwave discharge. Moreover, many factors can impact the potency of cold plasma against microbes. The factors include management time, the exposure process, nature of food, properties of studied organisms cell, the voltage used, and type of electrode used. Various studies have been performed to determine the effect of cold plasma on microbes in the treatment of milk it was observed that a remarkable inactivation of aerobic mesophilic bacteria and coliforms was achieved through the utilization of 78–104 watts in 4–8 min in pulse duration of 4 s on the milk samples. In other studies, it was observed that in packed food the cold plasma eliminates the desired amount of bacteria without any changes in the sensory and biochemical features of the food.

It’s an emerging field in the non-thermal food processing industries. It involves the application of high-intensity fields to food for a very short duration. An electric field is used in the place of heat. For food processing, the pulsed electric field the intensity applied to the food is from 25 to 85 kV/cm, and the exposure time is a few milliseconds or nanoseconds. Subsequently, the food is exposed for a very short duration of time, there are fewer or no chances of changes in the food material. The pulsed electric field (PEF) device comprises of control as well as a monitoring system, a pulse initiator, a high electrical power source, a room for treatment, a cooling system, and raw and treated product compartments. This technique is usually utilized for liquid food or semi-solid food. The food is kept inside the treatment chamber between the two electrodes, which are made up of stainless steel. The technology works with two basic processes such as electroporation and electrical breakdown, which indirectly helps in the inactivation of the pathogens present inside the food. The microbial inactivation takes place by electroporation by the formation of holes on the cell wall as well as the inner film of the pathogens. Furthermore, when it is combined with electric breakdown, the process reduces the power of the semi-permeable membrane of the pathogens, which results in the outflow of the cytoplasmic contents of the pathogen cells. This synergistic effect leads to microbial cell death. The overall effectivity of the PEF treatment on food processing relies on a few characteristics such as temperature utilized during the process, the energy of the pulse, time interval, and polarization. This technology has been applied for the treatment of foods like apple, orange, tomato, carrot juices, apple sauce, salad dressing, pea soup, eggs, milk, and milk products. Some studies have been performed for the treatment of food such as on raw milk the microbial inactivation was achieved by PEF-processed at 30 kV/cm and 63 °C at 72 °C for 15 s. 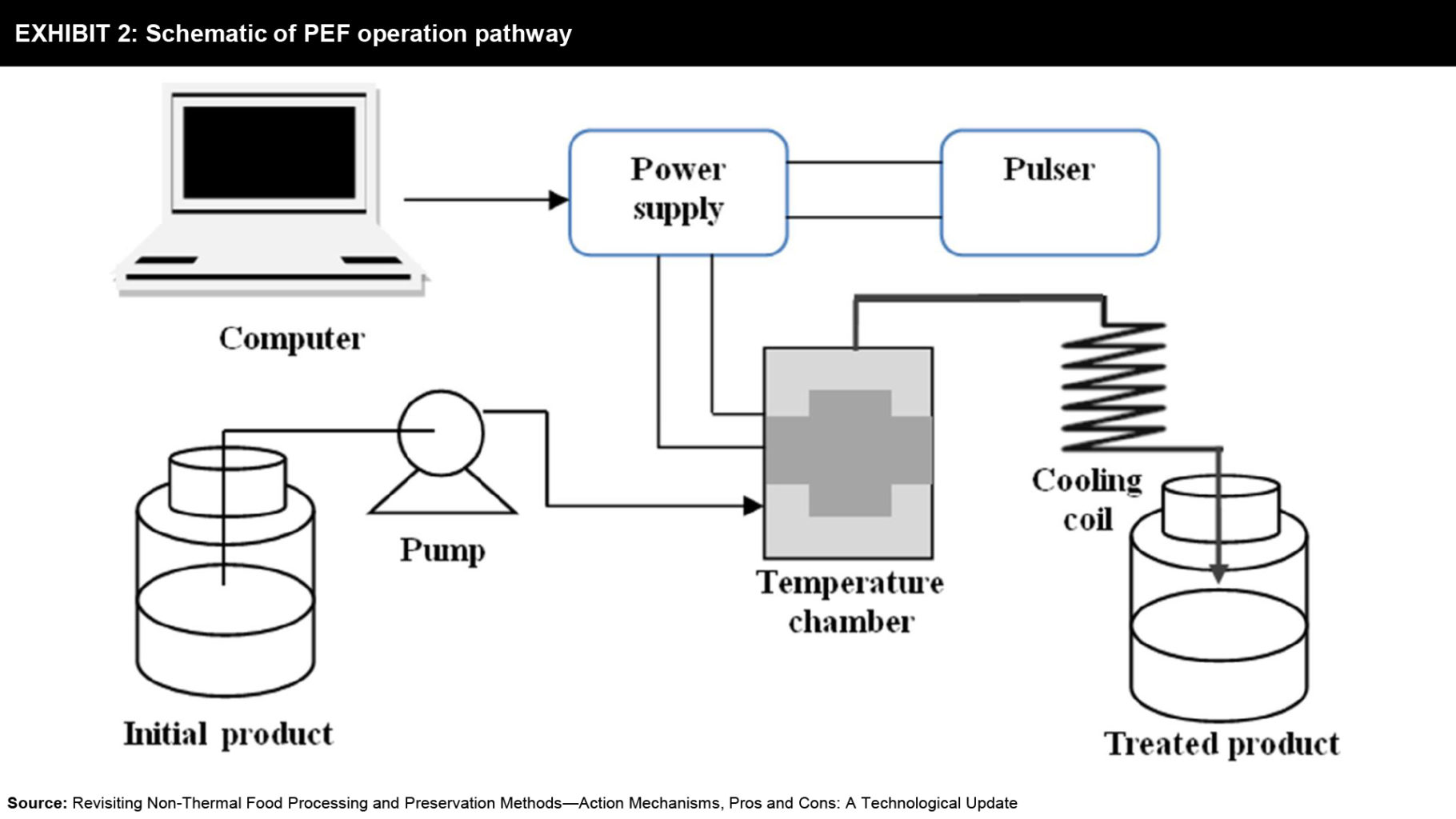 High-pressure pasteurization (HPP) utilizes water for applying pressure on the treated products. The HPP technology utilizes the pressure range for food processing treatment involves the range between 200-700 MPa. Furthermore, the temperature applied is below 20 °C with a time of exposure of seconds to minutes. This technology usually changes the anatomy of the bacterial cells and their enzymatic functions, which results in the weakening of its power and causes bacterial death. The HPP technology is can help in decreasing the pathogenic bacteria such as gram-negative bacteria, gram-positive bacteria, yeast, and mold during food processing, thereby increasing their shelf-life. When the food is subjected to HPP treatment, it undergoes high pressure for a short duration of time. The HPP treatment helps in increasing the shelf-life of the food and at the same time prevents them from bacterial damage. Furthermore, the HPP treatment was found to be effective against pathogens such as eukaryotes, Gram-negative bacteria, protozoa, and parasites compared to yeast and mold, which requires high pressure for their inactivation. The HPP instruments comprise of pressure area in which the food is placed and then the water is added to the chamber, food is then pressurized by utilizing this water. For the inactivation of gram-negative bacteria, yeast, and mold a pressure of 350-450 MPa is required at room temperature. In the case of gram-positive bacterial high pressure such as 1,100 is needed to inactive them. This high pressure usually helps in breaking down the cell membrane of microbial cells, which alters the permeability of microbial cell walls as well as membranes. The coiled protein structure is broken down, which leads to microbial cell enzyme destruction, resulting in microbial cell death. This technology is utilized for treating food items whose water activity transcend 0.8 such food item includes fruits, meats, milk and their products, vegetables, juice, seafood, and beverages. The utilization of HPP for microbial inactivation has been carried out in different kinds of foods in the case of juices the HPP of 600 MPa for 3 min can help in inactivating E.coli, S. entrica, and L. monocytogenes. 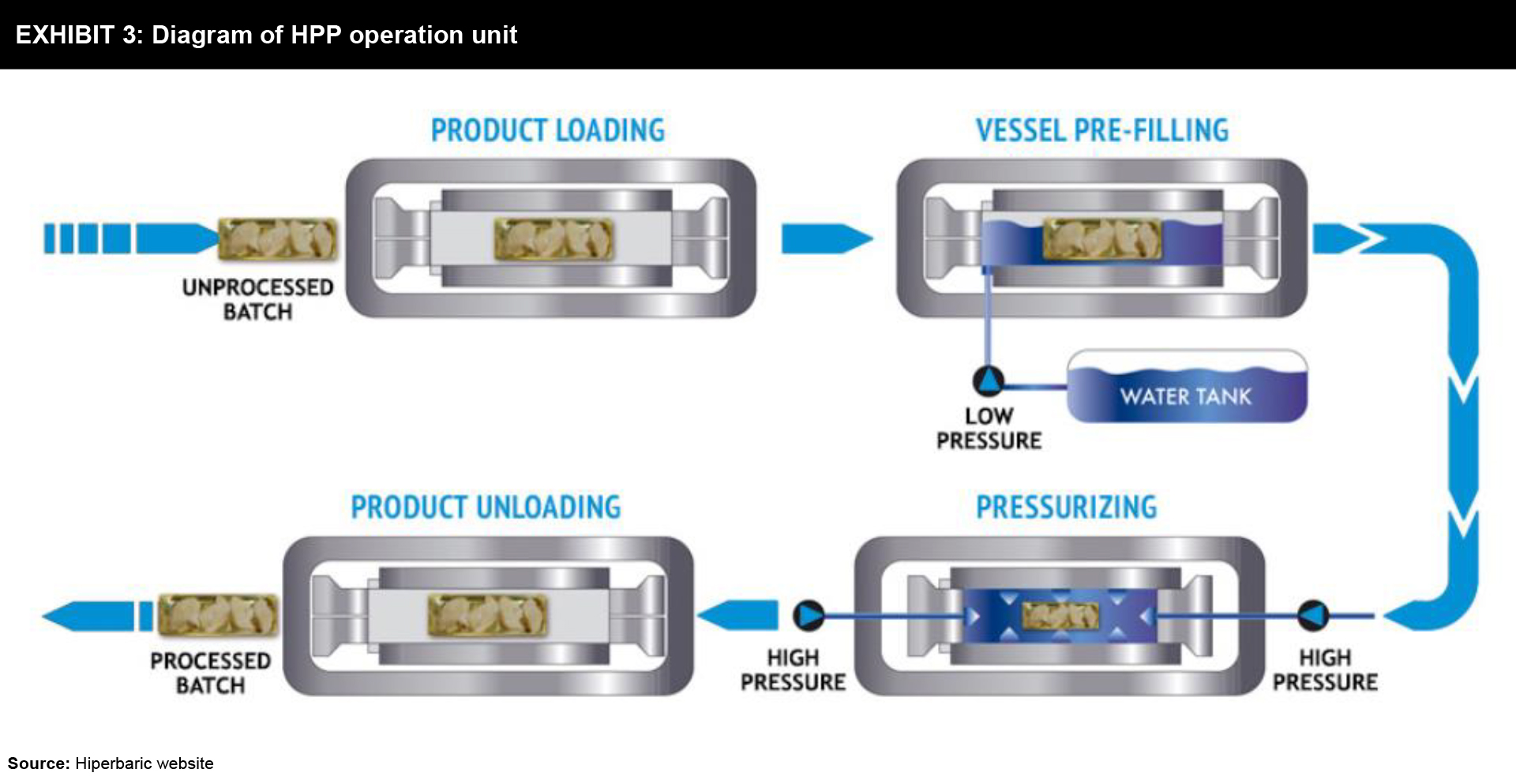