Radar – An Indispensable and Reliable Eye for Autonomous Vehicles

Fully autonomous driving would require a robust perception system that can handle adverse environmental conditions. Autonomous sensors are necessary for error-free driving; each sensor has its own unique capability that complements other sensors to make a robust sensor suite for autonomous vehicles. Radars are the second-most expensive sensor to be integrated into the autonomous vehicles, preceded by LiDARs, and are crucial in detecting the position of the oncoming car, along with its speed and trajectory. With the ability to detect stationary and dynamic objects in the surrounding, radars can also see through objects, such as cars, detecting obstacles present behind a vehicle by looking under them.

Exhibit 1 below shows some of the state-of-the-art radar products that are being used for ADAS applications: 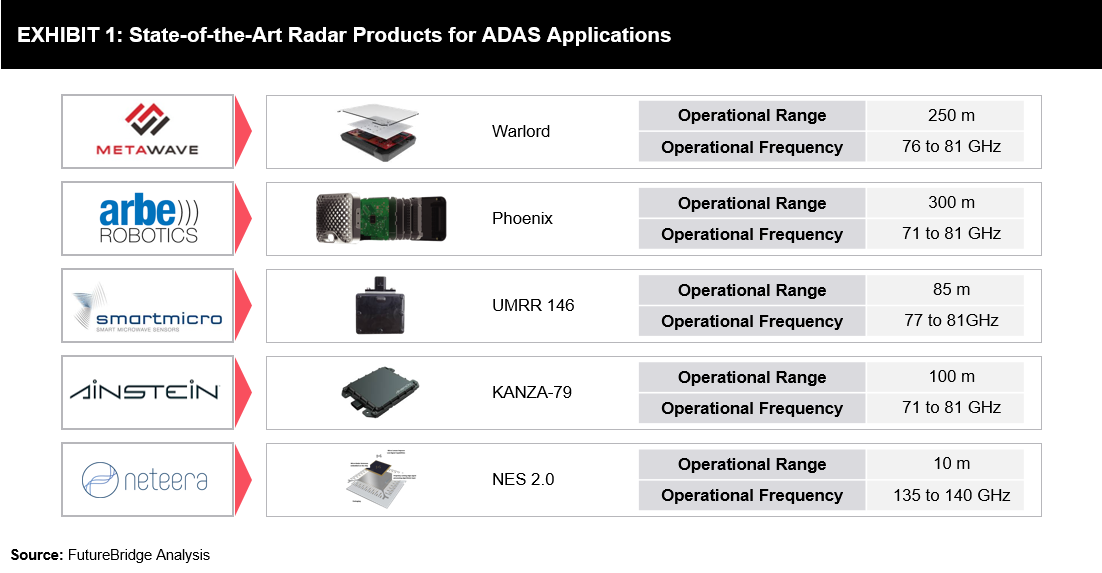 Owing to the benefits associated with radars, every autonomous/semi-autonomous vehicle at present is equipped with radar. Though it plays very important role in perception, it needs other sensors to complement the limitations.

Further, the current radar technology in itself has scope for improvement to enable a suitable automotive system. Packaging issues (size), resolution, and localization features are some of the areas where current generation radars are lacking. However, automotive players are trying to address these problems with innovations in various aspects of radars.

Radars have a strong property of identifying the trajectory of dynamic objects and seeing through things. However, their capability with regards to object classification and vehicle localization is limited due to the very nature of radio waves unable to identify patterns. The use of Giga Hertz frequency that is generally between 70GHz to 90GHz for ADAS application have a very narrow band, owing to which, there is a compromise of angular resolution of radars. Further, due to the use transmitters and receiver antennas, the radar size become bulky and mounting becomes a challenge.

Overcoming challenges such as classification, resolution, and size, seems to be difficult for automotive radar manufacturers, as finding solution for one challenge generally has a deprecating impact on other parameters. For example, if increasing resolution is the main focus of development, the need for more number of transmitter increases, which, in turn, increases the overall size of sensors.

Innovations Expanding the Capabilities of Radars

Several technology start-ups have brought innovative solutions to enhance radar capabilities; a few technologies even claim to make other sensors redundant. Some of the key innovation in recent times for automotive radars include 4D radars, use of meta-materials for antennas, radar detecting road conditions, sub-terahertz radar, etc. A summary of active players for automotive radar is summarized in Exhibit 2 below. 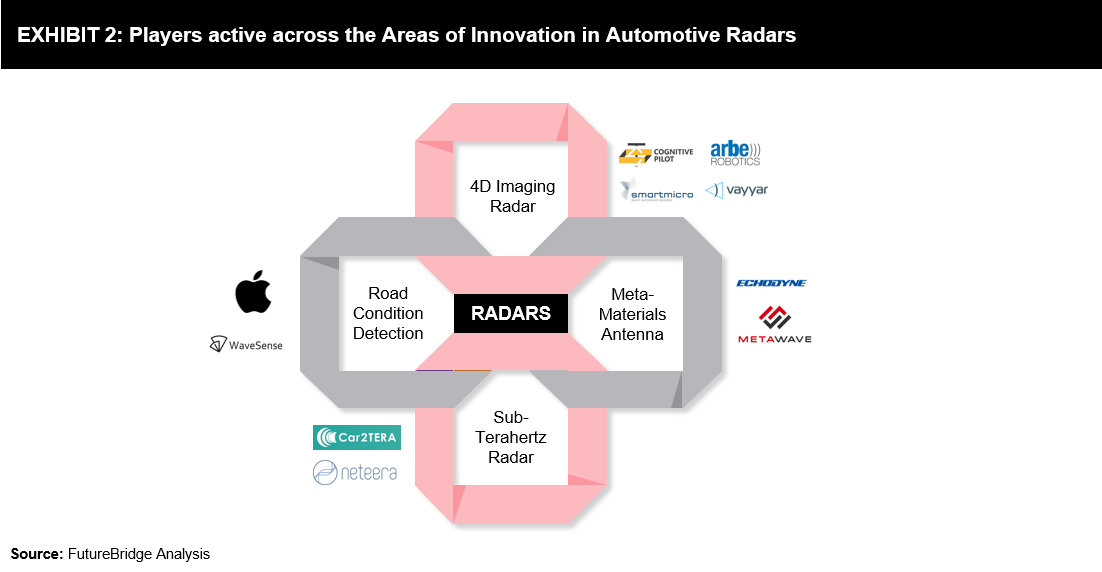 Metawave, another start-up is using a combination of meta-materials and artificial intelligence methods with focus on smart radar platforms for ADAS and autonomous driving. The company’s electrically steerable radar antenna system known as the W-band Advanced Radar for Long-Range Object Recognition and Detection (WARLORD) is a single antenna fed by a single transceiver port. The AI algorithm is for the radar, responsible for processing the radar data and provide some level of confidence about the object.

With a unique approach for obtaining high-resolution point-cloud and keeping the size as small as possible, Lunewave developed unique 3D printed radar antennas; these antennas have a spherical shape and operate within the frequency range of 76-81 GHz. They are said to be capable of 360˚ field of view and have a long detection range of 300+ meters. Lüneburg 3D printed lens antenna is a microwave antenna with an insulator placed in front of the dipole to manipulate radiated energy. 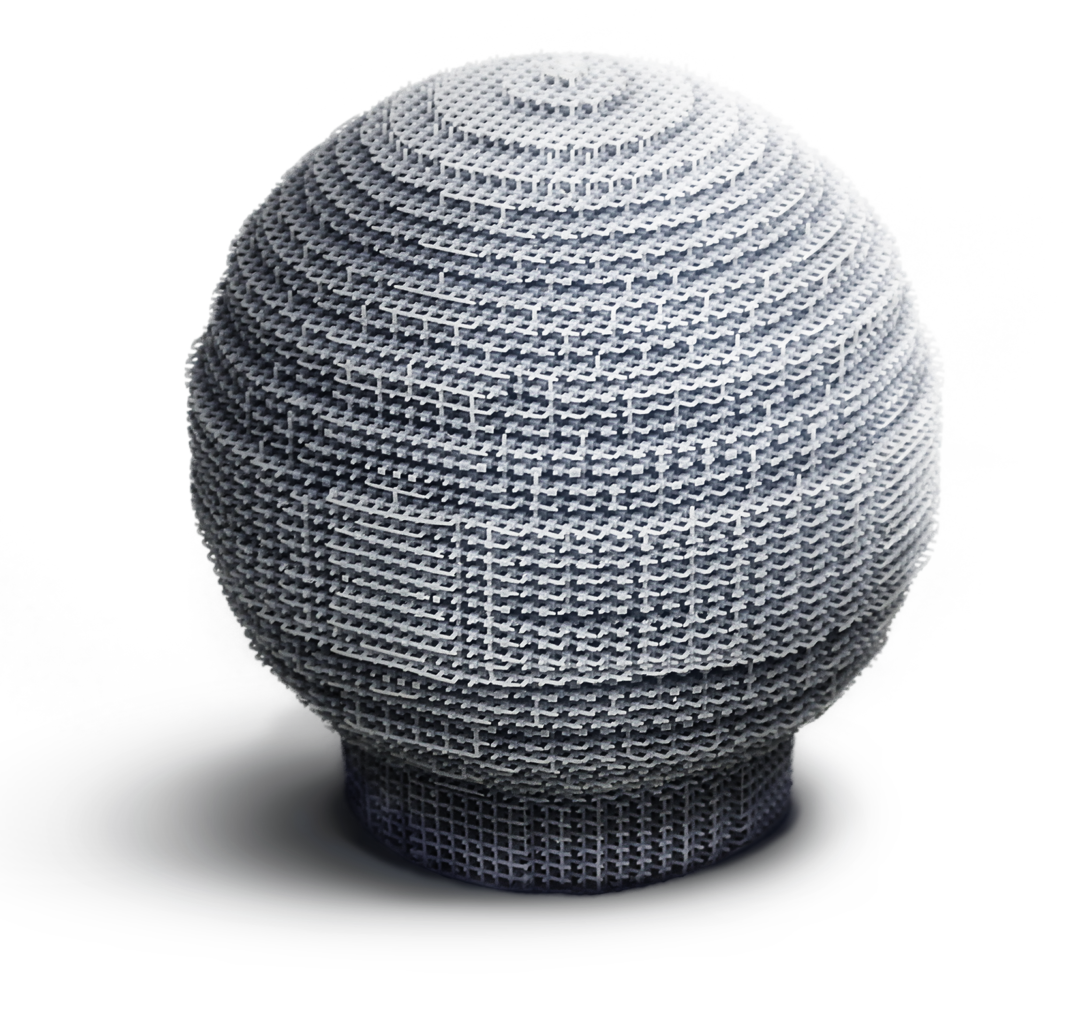 Another way of achieving high-resolution in radar system is exploiting the sub-terahertz frequency range, which can be from 100 GHz to 350 GHz. This frequency range is beneficial for efficient performance, with enough bandwidth to satisfy high-resolution demands of in-vehicle and advanced ADAS functionalities.

Car2TERA, a European Project funded from European Union’s Horizon 2020 research and innovation program, is aiming at the use of sub-terahertz frequency radar for in-vehicle and fully automated vehicles. This project will combine the results of:

These radars use echo-locations and principle of time-of-flight measurement to capture the environment in 3D, and the time being the 4th dimension, gaining the information of speed of the oncoming or receding vehicle. 4D imaging radars have overcome the main challenge of resolution, as the current radars are of very low resolution compared to that of the resolution of camera and LiDARS. They are capable of capturing objects both in the elevation as well as in azimuth, and can classify objects in high-resolution, which in turn, boosts the capability of the radar system to solely localize the vehicle on its own. 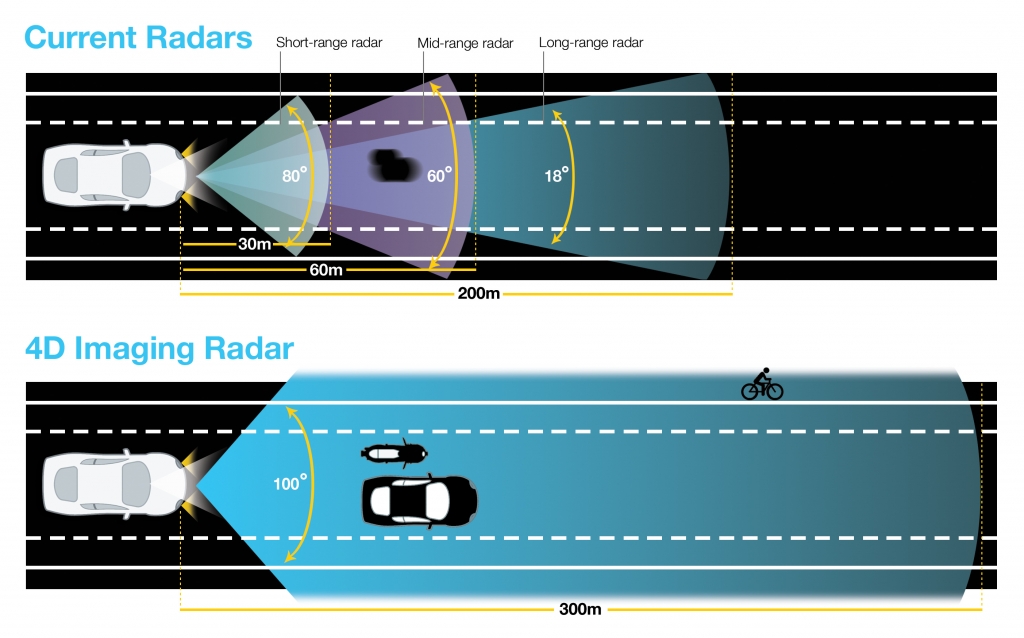 Vayyar Imaging introduced an automotive 4D point cloud application – introduced for both in-vehicle passenger monitoring and environment sensing for ADAS features, it uses a single radar chip. This radar constructs a real-time, high-resolution 4D visualization of both, in-cabin and outside environment of the car. The single chip solution enables in-cabin features, such as seat-belt reminder, optimized airbag deployment, gesture control, child safety, driver monitoring, as well as exterior features, such as enhanced parking assistance, blind spot detection, cruise control, obstacle alerts, and lane switch assistance. It provides easy integration of the sensor into the existing automotive framework, thereby reducing the overall cost and number of sensors needed for the vehicle.

Arbe Robotics, specialized in robotics, claimed a breakthrough (in January 2019) in the autonomous vehicle’s radar sensor suite by presenting its 4D imaging radar. This radar could classify objects in elevation and azimuth in high-resolution and could potentially provide L4 autonomous driving capabilities with its high performance specifications of localizing the car and classifying objects on the map at 25 times per second. Smartmicro and Cognitive Pilot are among the key companies to have developed 4D imaging radars for autonomous driving capabilities.

Primarily, low-resolution radars are used for oncoming vehicle detection and pedestrian detection. However, new technologies such as 4D radars and sub-terahertz radars enable high-resolution transmission of electromagnetic waves. These types of radars can not only detect pedestrians and other vehicles but also analyze road conditions. They can penetrate deep inside the road and create a map of the road’s sub-surface for enhancing the localization of the vehicle, or it can locate safe paths and maneuver through obstacles. 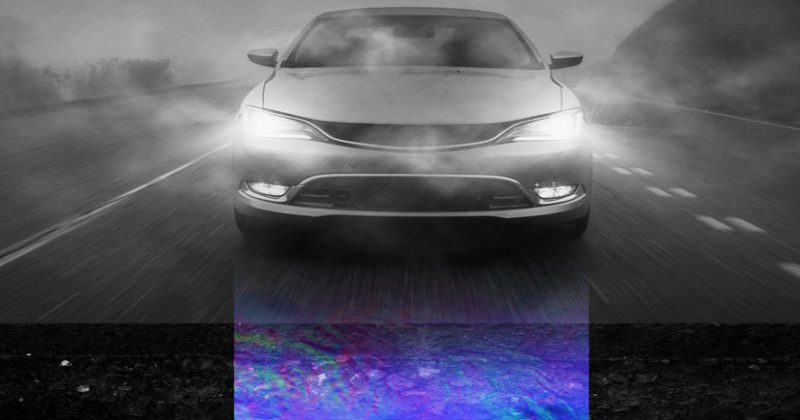 Apple recently (in April 2019) patented a radar system that is built into the bottom of a vehicle that can accurately assess the road condition for keeping the vehicle stable. WaveSense, a Boston-based company, developed radar system that penetrates the ground, seeing beneath the road surface, thereby creating sub-surface map. This helps in the accurate localization of the vehicle by using the sub-terrain fingerprint and comparing the car position to a preloaded map with an accuracy of 2cm laterally and 15cm longitudinally depending on the speed of the vehicle. Additionally, a blog published on Ansys, states that radars will likely have a higher degree of functionality, with the ability to image the road scene, detect and track objects or obstructions, and even locate safe paths through unfolding hazards.

High-resolution, comparatively cheaper radars are proving to be alternatives to the costly LiDARs. Fractal Antenna Systems reports that the company’s tracking and identification system is developed for making road tags brighter to vehicular radar, to help improve driverless tracking and possibly overtake the use of LiDAR systems. The system uses enhanced radar reflectors known as superscatterers, which when attached on road signs, barriers, and other vehicles, makes car-based radar exponentially more effective and can potentially overcome the advantages of LiDAR.

Another start-up, Ainstein, developed a high-resolution radar for autonomous driving in 2019. This radar pinpoints the location of objects and provides range, speed, azimuth, and elevation information, as well as can distinguish between vehicles and pedestrians. The company claims that this radar can generate LiDAR-like images, which can function effectively in situations, such as extreme weather conditions with very little visibility, wherein the LiDAR functionality is compromised.

Radars will always be an important sensor to be included in autonomous vehicles, as vehicles might need to operate during worst weather conditions wherein cameras and LiDAR would be of limited use. Advances in radar technology with respect to high-resolution, compact design, and low cost will increase its reliability for use in ADAS.

Till date, radar has not been considered as localization sensor; however, enhancements and developments such as meta-materials antenna, 4D radar, high resolution, integration with GPS systems, etc., enable its use in localization in the near future.

Recent advancements in radar technology have enhanced their capabilities exponentially. Such capabilities might create redundancy for other sensors, particularly LiDARs. This will also go hand-in-hand with non-LiDAR AV approach, followed by the likes of Tesla, Nissan, etc. Further, improvements in radar will provide an opportunity to develop sensor suite that are economical, and hence, may have a higher chance of acceptance in the automotive industry.