For the first time since 2019, ~31,000 oncologists attended the 2022 ASCO Annual Meeting in person, recapturing the energy of the pre-Covid era. While new data that can transform patient care in oncology continued to emerge, cell therapies were amongst the movers. Players in the field of cell therapy had a successful ASCO 2022 with positive and persistent evidence of heme malignancies.

With many wins in heme oncology now, the focus of the field has switched to addressing the inadequacies in the current set of cell therapies, and strategies to win the patient continuum and expanding the footprints in rare, high unmet need areas. The novel gamma delta T cells from Adicet and the safer BCMA-focused CAR therapy from Arcellex deserve special notes.

FutureBridge team has put together a series of updates to encapsulate and share the learnings from ASCO 2022. This first update highlights long-term data from pivotal cell therapy trials of established players such as Kite/Gilead, Jannsen/Legend Biotech and novel approaches adopted by Adicet, Arcellx, and China players such as Gracell, Oricell, and Xi’An Yufan Biotechnology Co., Ltd. The report also shares our point of view and key questions that will be crucial for continuing the CAR-T show in heme oncology.

When it comes to treatments, CAR T cells have received the most attention in hematological malignancies, and rightly so given the way they drastically changed the treatment landscape in the last five years. Since 2017, the FDA has approved six CAR T cell therapies

ASCO 2022 showcased several studies that demonstrate the unmatched potential of CAR-Ts in heme malignancies and provides a compelling reason for continued interest and investment in the area. 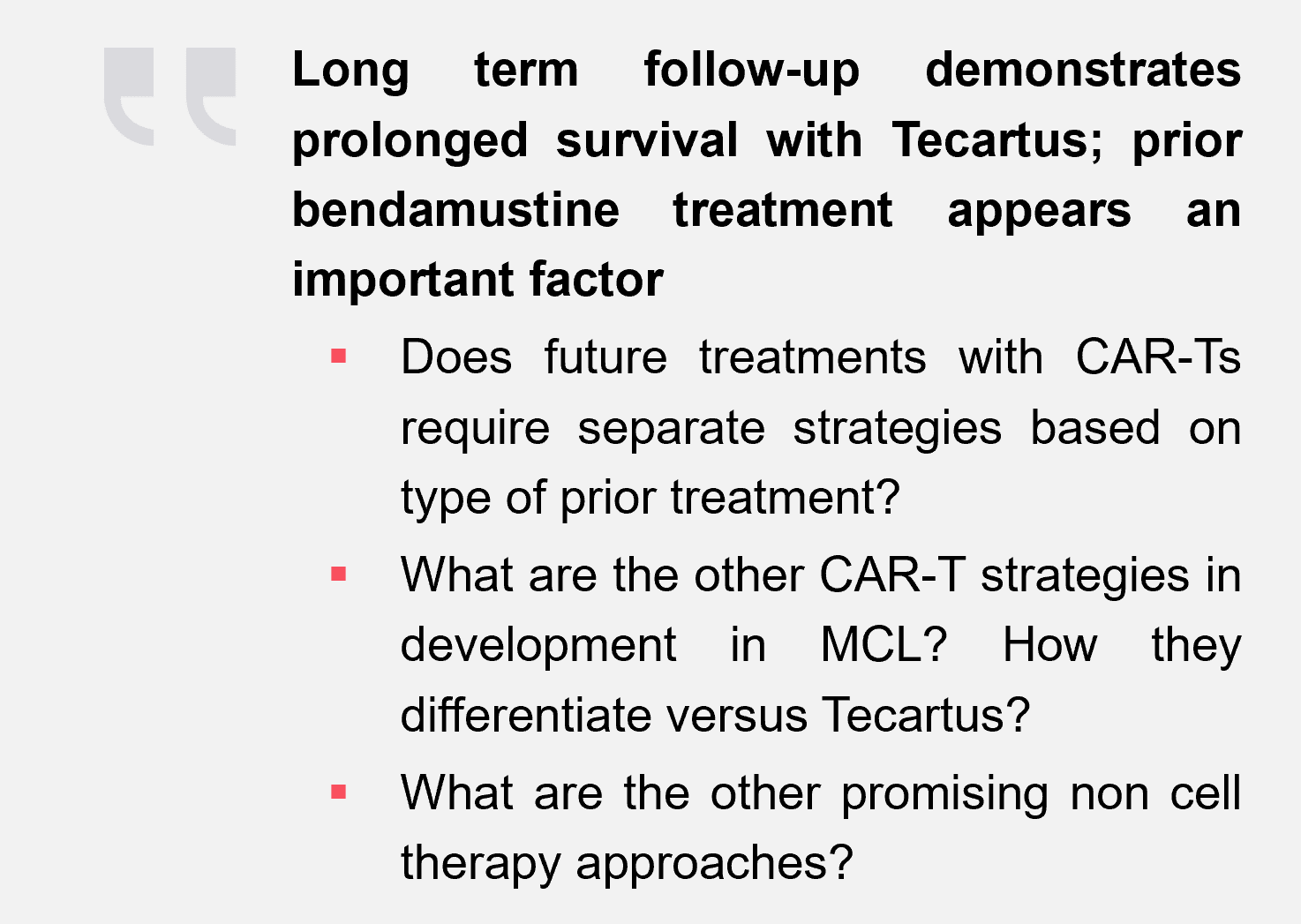 Tecartus (Brexucabtagene autoleucel) an anti-CD19 CAR-T-cell is approved for R/R Mantle Cell Lymphoma treatment. Approval was based on the pivotal ZUMA-2 trial. Three-year follow-up (the longest follow-up of CAR-T cell treatment in patients with mantle cell lymphoma) was presented at ASCO 2022. Brexucabtagene autoleucel continued to produce long-lasting responses. The ORR among 68 treated patients was 91% with CR of 68%. ITT population ORR and CR were 84% and 62% respectively. mDOR, mPFS, and mOS were 28.2 months, 25.8 months, and 46.6 months respectively in all treated patients. Patients with CR had significantly longer PFS and OS (mPFS – 48 months; mOS – not reached; 30 months OS rate -76%).

CRS is life-threatening toxicity that limits the full therapeutic potential of CD19 CAR-Ts. In Zuma-3, CRS and ICANS occurred respectively in 92% and 87% of patients1. According to certain preclinical findings, CAR-T cells with lower HPK-1 (hematopoietic progenitor kinase 1) expression showed better antitumor activity and did not cause high-grade CRS. HPK1 is mainly expressed in hematopoietic cells and functions as a negative regulator of TCR-generated activation signals. The first-in-human clinical trial to evaluate CD19 CAR-T cells with reduced HPK1 expression (XYF19 CAR-T cells) for adult (r/r) B-ALL is now underway by Chinese biotech known as Xi’An Yufan Biotechnology Co., Ltd and is registered as NCT04037566. No patient has yet developed dose-limiting toxicities in this clinical investigation. In 11 evaluable patients, no ≥ grade 3 CRS or ICANS was observed. The results are exceptionally promising when compared to approved Tecartus.

Adicet Bio provided impressive early data of its off-the-shelf CD20 CAR gamma delta T cells. The use of MHC independent gamma delta T cell receptors reduces the danger of Graft vs Host Disease. In a phase, I Glean Trial, ADI-001, demonstrated excellent efficacy and safety in R/R aggressive B-cell lymphoma. All patients had aggressive lymphomas and poor prognostic features with a relatively high tumor burden. Three DLBCL patients had progressed on prior CD19 CAR-T (Yescarta, JCAR 17). At the data cutoff, six of the eight patients demonstrated complete responses recording an ORR and CR rate of 75%. The ORR and CR rate in CAR-T relapsed patients was 100%.

Treatment with ADI-001 converted PRs observed on prior CD19 CAR-T treatment to CRs. There were no ≥ Gr 3 CRS, GvHD or DLTs. The results will provide impetus to allogeneic cell therapy programs and intensify the developments with gamma delta T cells as another unique cell source for cell therapies.

In the update of the 1Cartitude-1, Janssen and Legend Biotech’s Carvykti demonstrated promising data with ORR-~98%, sCR- 82.5 %, and ≥ VGPR- ~95% at a median follow-up of ~28 months. Most patients in the high-risk subgroups responded to the treatment through DOR, PFS or OS were shorter. In MRD evaluable patients (N=61), ~92% were MRD negative. Patients who achieved MRD for ≥ 6 and ≥ 12 months and those who had sCR displayed higher PFS vs the overall population. OS rates at 27 months in patients with sustained MRD negativity for ≥6 m and ≥12 m were 93.5% and 90.8%, respectively. 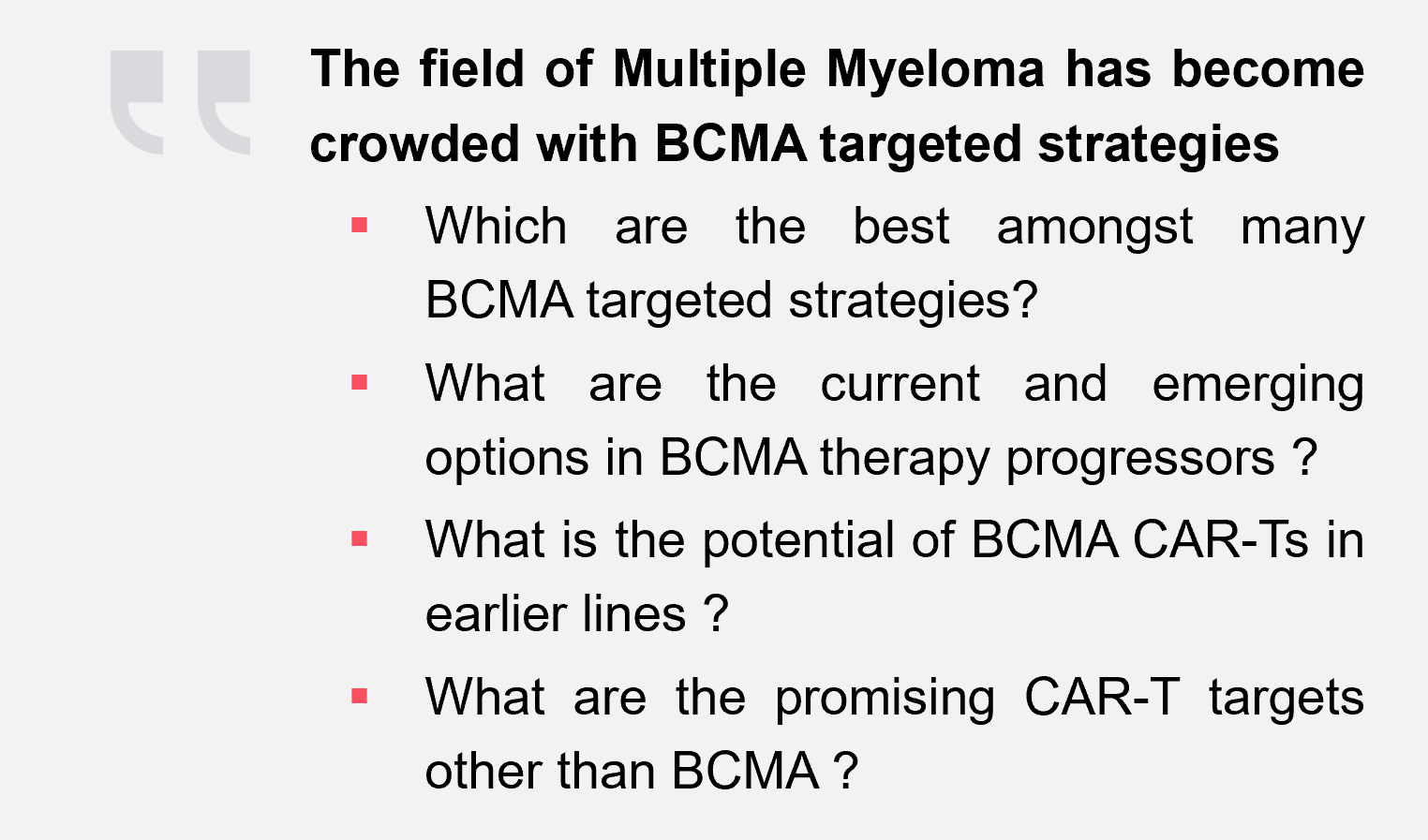 While Carvykti boasts unmatched efficacy, it carries a black box warning of cytokine release, neurotoxicity, Parkinsonism and Guillain-Barré syndrome, macrophage activation syndrome (HLH/MAS), and prolonged and/or recurrent cytopenia. In the update of Cartitude -1 also one new case of parkinsonism was reported. Overall, there were 6 patients with symptoms of parkinsonism, out of which 3 died (two from other underlying causes and one due to parkinsonism) one has recovered while another one is recovering. In contrast, in a first-in-human, phase 1 trial, Arcellx reported a potentially differentiated and superior profile of its autologous 2CART ddBCMA which carries a novel synthetic protein binding domain engineered to reduce the risk of immunogenicity. In 31 patients evaluable for efficacy and safety at two dose levels (100 and 300 million CAR+ T cells), CART ddBCMA showed 100% ORR, 71% sCR/CR and 94% ≥VGPR. CAR-T responses deepened over time with 81% sCR at a median follow-up of 17.7 months. There was 1 case each of grade 3 CRS and grade 3 any grade immune effector cell-associated neurotoxicity syndrome (ICANS) at 300 million dose cohort however no such grade 3 AEs at 100 million dose level. No delayed neurotoxicity or parkinsonism was observed in the patients. Pivotal phase 2 is planned to initiate this year.

In an oral abstract presentation, Gracell presented clinical data of GC012F, the company’s autologous BCMA and CD19 dual-targeting CAR-T for the treatment of r/r multiple myeloma. GC012F is developed using the proprietary FasTCAR platform, with the projected next-day manufacturing of CAR-T therapies that can address the need for faster delivery to the patients. ASCO 2022 data and a recent update at a cut-off of June 8, 2022, showed that at a median follow-up of 11 months, GC012F continued to demonstrate deep responses with mDOR of 15.7 months in mostly high-risk, heavily pre-treated patients. The response rates at different dose levels ranged from 80-100%. All (29/29, 100%) MRD-assessable patients achieved MRD negativity and ~76% (22/29) achieved MRD- sCR. GC012F was safe with mostly low-grade CRS. No > grade 3 CRS or any grade ICANS were observed. CD19 appears an unusual target for multiple myeloma, however, earlier also a study in a refractory multiple myeloma patient who received autologous transplantation followed by Kymriah reported complete response with no evidence of progression 1year after treatment. Interestingly, in this patient, the response was observed despite the absence of CD19 expression in 99.95% of the patient’s neoplastic plasma cells. It is suggested that a minor population of multiple myeloma with drug-resistant, disease-propagating properties has CD19 + phenotype. Subgroup analysis may be required to discern the extent of benefit in different multiple myeloma populations1.

The field of multiple myeloma is becoming crowded with BCMA approaches. Consequently, a high unmet need exists for patients who progress on BCMA therapies including BCMA CAR-Ts. Shanghai-based small Biotech OriCell highlighted promising data with their OriCAR-017 – targeting a novel receptor GPRC5D (G protein-coupled receptor, class C group 5 member D). GPRC5D is expressed on malignant myeloma cells, whereas normal tissue expression is limited to the hard keratinized tissues (e.g. hair follicles, nail matrix) which may confer higher safety. Indeed, in a phase I POLARIS trial, in ten efficacy/safety evaluable patients, OriCAR-017 was well tolerated at all dose levels with no DLTs, no ≥ grade 3 CRS, and no ICANS or deaths. OriCAR-017 also demonstrated impressive efficacy with 100% ORR with 60% stringent CRs (All the patients are said to be in remission, with 6 complete responses). Importantly, 5 patients who were previously treated with BCMA CAR-T also responded to OriCAR-017 with sCR and VGPRs2. 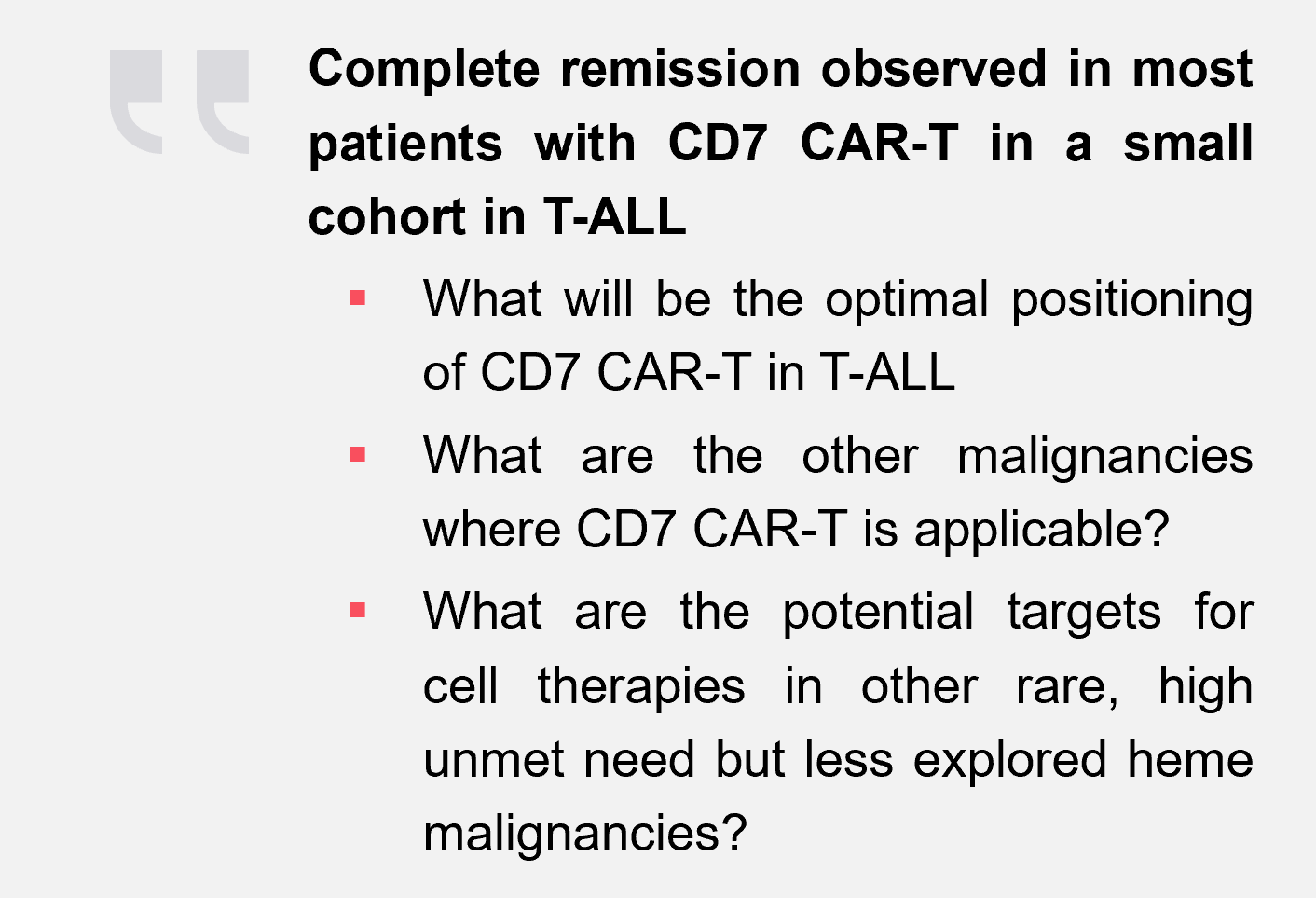 In patients with R/R T-ALL, a novel CD7 target is being investigated. CD7 is a cell surface costimulatory molecule found on human T and natural killer cells, as well as T, B, and myeloid cells in the early stages of development. Autologous CD7 CAR T cell treatment was found to be safe and effective in inducing complete remission in 80% (4/5) patients in a phase I trial.

Key questions that will form the basis for future development include:

Our customized oncology consulting services integrate in-depth industry knowledge, relevant-analytics platforms, and PoVs from leading external experts to offer efficient solutions to pharmaceutical and biotech companies in the domains of therapeutics and diagnostics.

Connect with Prakash Dogra (prakash.dogra@futurebridge.com) for any queries or share your business objective here for your project needs. 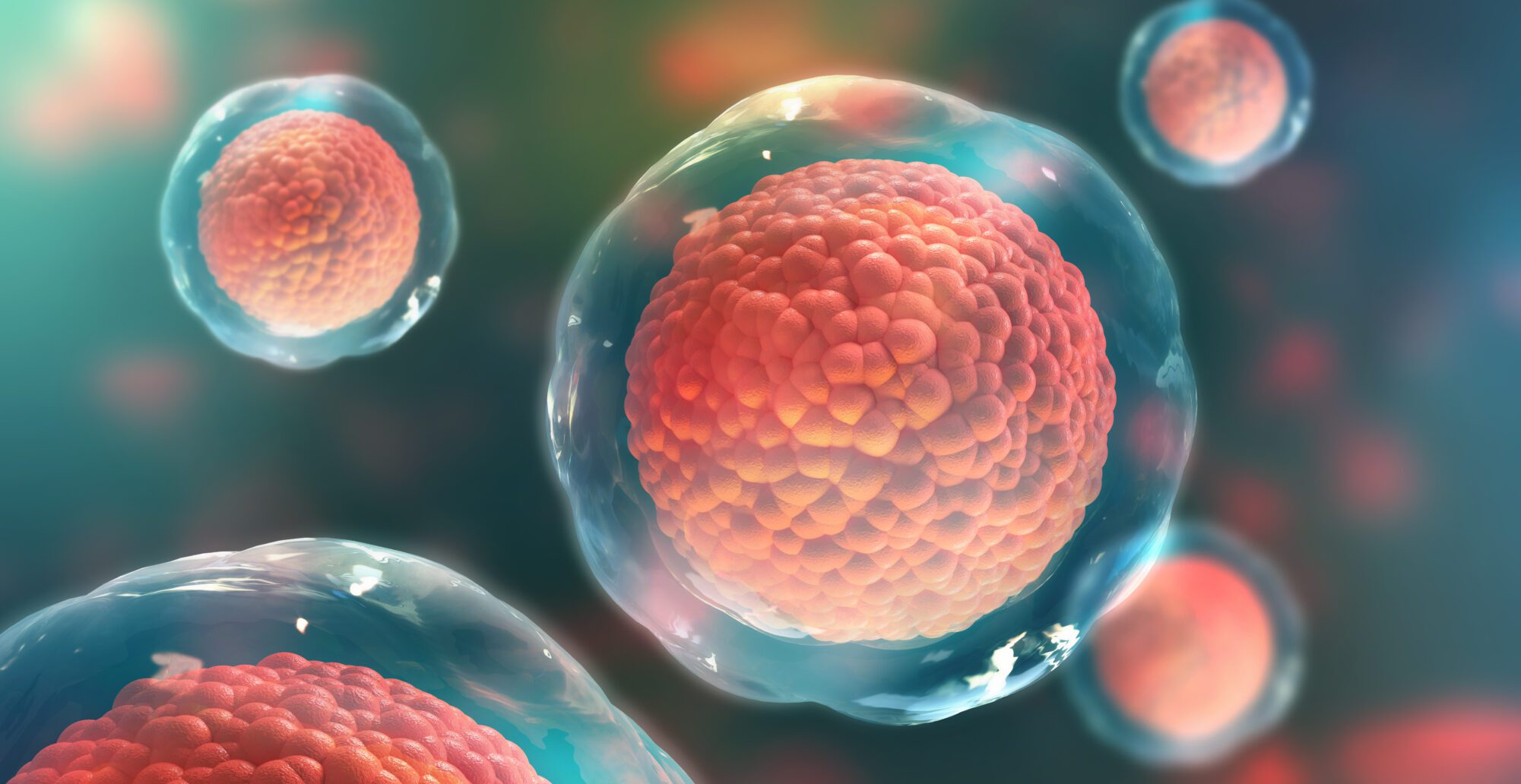