The future of mobility belongs to electric vehicles, as various governments worldwide are aggressively supporting its adoption. The market for electric cars is showing rapid growth for the last few years, and as the adoption of these vehicles increases, so the demand for high range, fast charging, and safety. To meet these demands, manufacturers need to increase the battery density to increase the rage; simultaneously, these high-powered batteries need quick chargers and a better cooling system to improve safety.

During the charge and discharge cycles, lithium-ion battery cells generate a large amount of heat. This heat is produced primarily by exothermic chemical reactions and losses due to activation energy, resistance to ionic migration, and chemical transport. The majority of this heat generation happens at a charge and discharge extremes, whereas, at a State of Charge (SOC) between 20 and 80 percent, there is usually little heat produced. 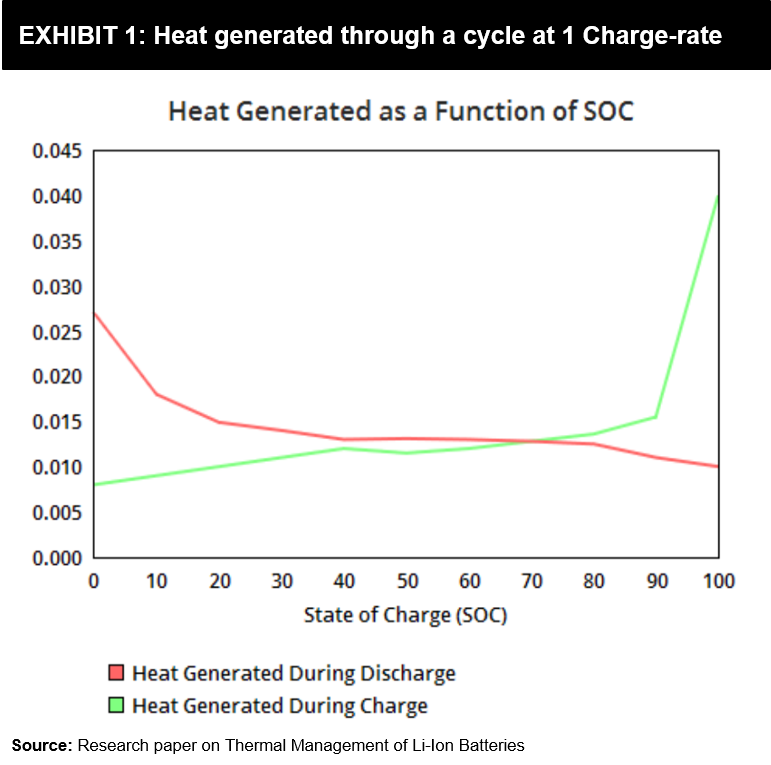 As the power density of EV battery increases and fast charging options, the dissipation of heat generated becomes very important.

There are four methods of battery thermal management systems, as given below. 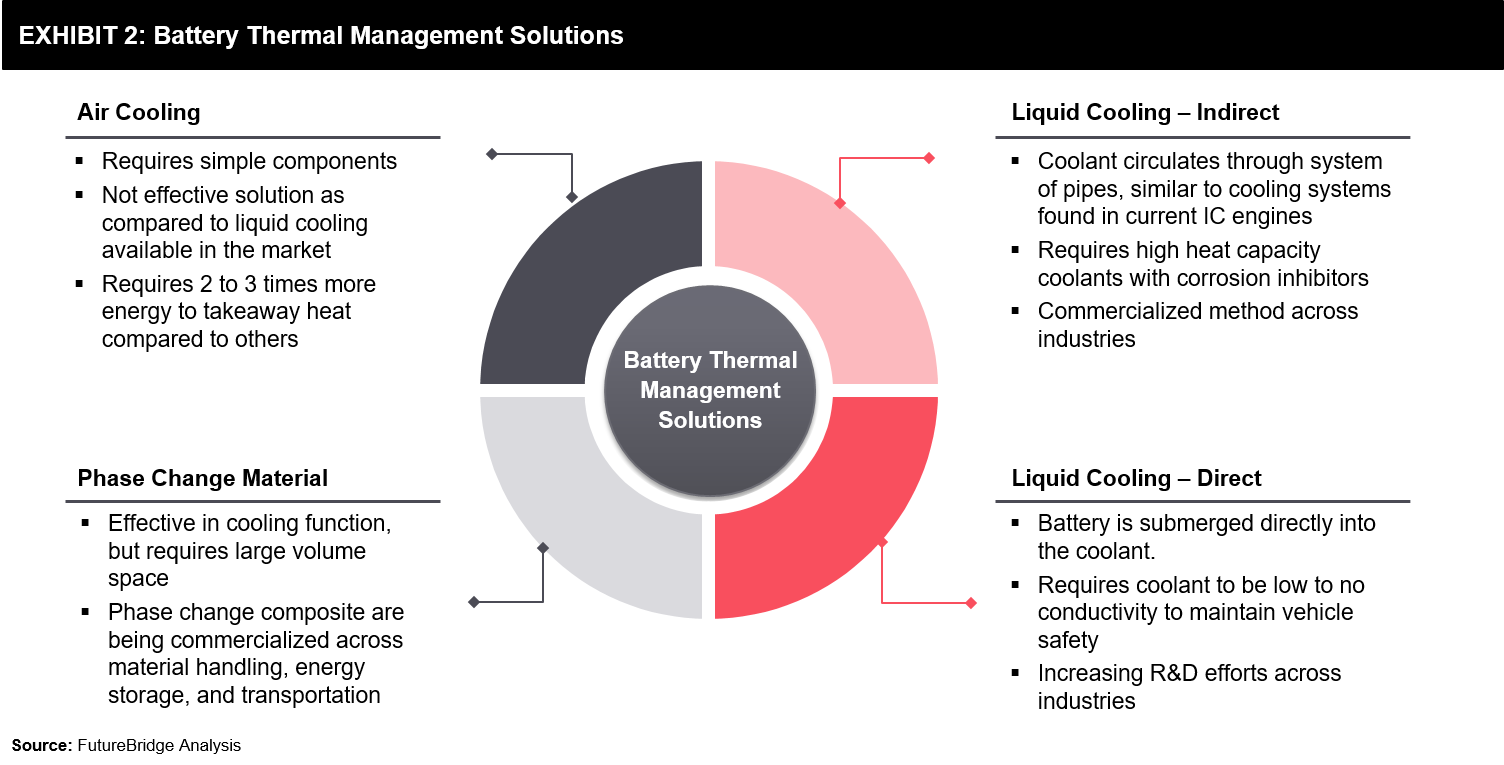 Air has a low heat capacity (Cp = 1.006 kJ / kg K at standard temperature), so it is essential to use a large air volume, mainly when the temperature delta is low between the battery module housing and the ambient air temperature. Another air cooling challenge is that the heat transfer surface of a battery must be exposed to air, so its physical location is limited to those places where airflow is available or where it is possible to channel the air. To ensure that the total air needed to cool the device is usable, this may create the need to add additional infrastructure and volume to the device, not to mention any filtering or cooling necessary to avoid corrosion or deterioration of the battery module materials.

Indirect liquid cooling, in which a water/glycol solution of dielectric liquid coolant flows through a heat sink or cold plate within the battery framework or structure of the battery module, is an alternative to traditional air cooling. Indirect cooling involves cooling the battery cells through conduction, through their direct thermal bonding with the heat sink, within the module case.

By its nature, aqueous glycol coolants are exceptionally electrically conductive, which means that aqueous coolants should not be brought into direct contact with battery tabs and wiring. This conductive nature restricts their use to indirect cooling techniques, such as water jackets around battery modules or cold plates mounted within the battery module. In indirect cooling, to increase the system’s reliability, manufacturers and users must ensure that no aqueous solution leaks into contact with the batteries, wiring, or other electrical components. The direct contact will make them short on each other, cold plate, and battery casing module, likely causing thermal runaway in the cells involved or user injury due to the high amperage and voltages involved.

As manufacturers look for an alternative to traditional battery cooling systems, direct immersion cooling systems could provide the best option in the future. 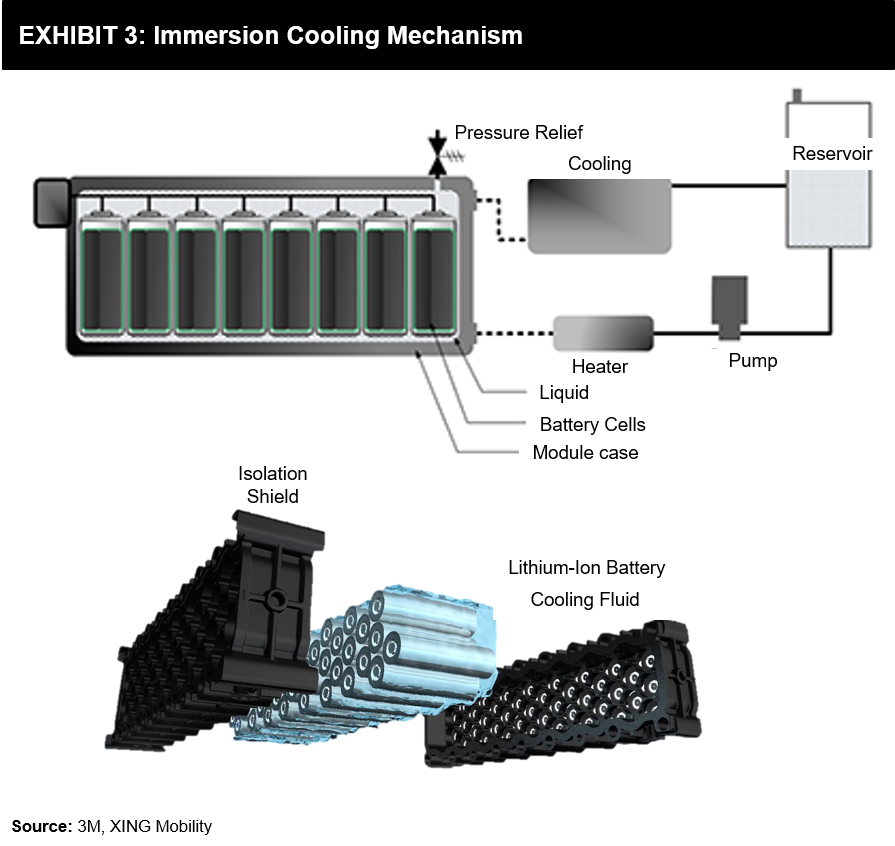 The dielectric coolant is typically circulated with a pump to ensure that it flows continuously throughout the device architecture and comes in continuous contact with all cell walls, tabs, and electrical wiring within the battery module. Direct coolant flow absorbs the heat produced by the cells by direct conduction. It is then transferred to a heat transfer system such as a radiator or heat exchanger to transfer the heat energy to the atmosphere. If the heat load is sufficiently low, battery module cell walls can passively cool it utilizing convective airflow. Full immersion of battery cells also ensures the highest thermal contact and consistency.

An essential safety benefit of dielectric coolants over water-glycol and other conductive coolants is that they can be brought into direct contact with all device components without causing cell thermal runaway, minimizing electronics failure or user shock risk. Moreover, the safety and environmental problems associated with leakage and disposal of dangerous aqueous glycol coolants are avoided with biodegradable, non-toxic, food-grade rated dielectric liquid coolants. 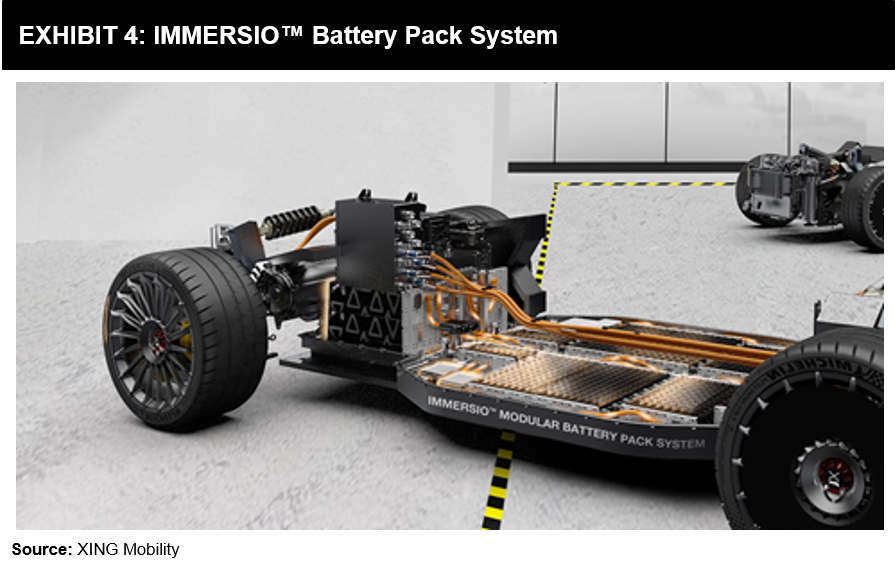 IMMERSIO™ Battery Pack System uses a technology that directly submerges lithium-ion battery cells in a non-conductive liquid coolant to efficiently distribute heat and homogeneity between the battery cells’ temperatures. The IMMERSIOTM of XING uses 3 M Novec Engineered Fluid, a non-flammable engineered fluid that is not conductive. This fluid’s flame-retardant nature serves as a safety feature, suppressing overheating, or fire events until they spread between cells and reducing the risk of thermal runaway.

According to XING, it will be challenging to optimize an electric drivetrain’s power density with the cooling technology and enclosure solutions currently in the market, no matter how efficient and powerful motors are used. The XING Battery System consists of 42 lithium-ion cells each in stackable, LEGO-like battery modules. Although most liquid-cooled packs, like Tesla’s, circulate coolant through tiny hoses that snake through the battery pack case, XING takes a more immersive approach. 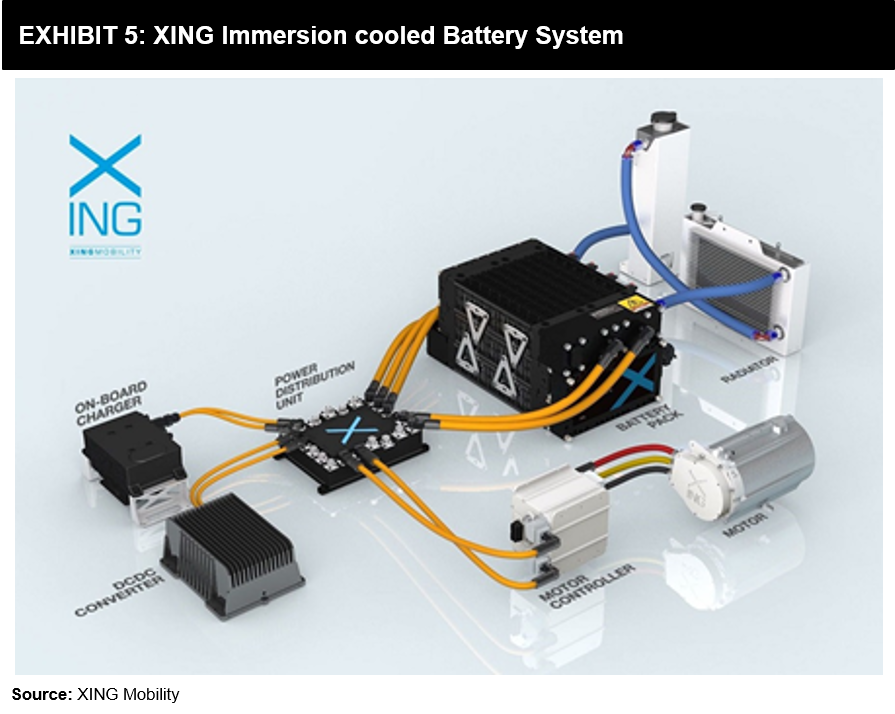 Immersion cooling has been successfully used in applications like data centers in the past; however, some players have recently started working on its battery application, used in electric vehicles. Last year a joint research project to develop a next-generation battery cooling device using dielectric fluid was announced by M&I Materials, WMG, and Ricardo. Before that, in 2018, XING Mobility, a company that specializes in niche electric vehicle markets, introduced the world’s first commercially available immersion cooling system for electric vehicles. 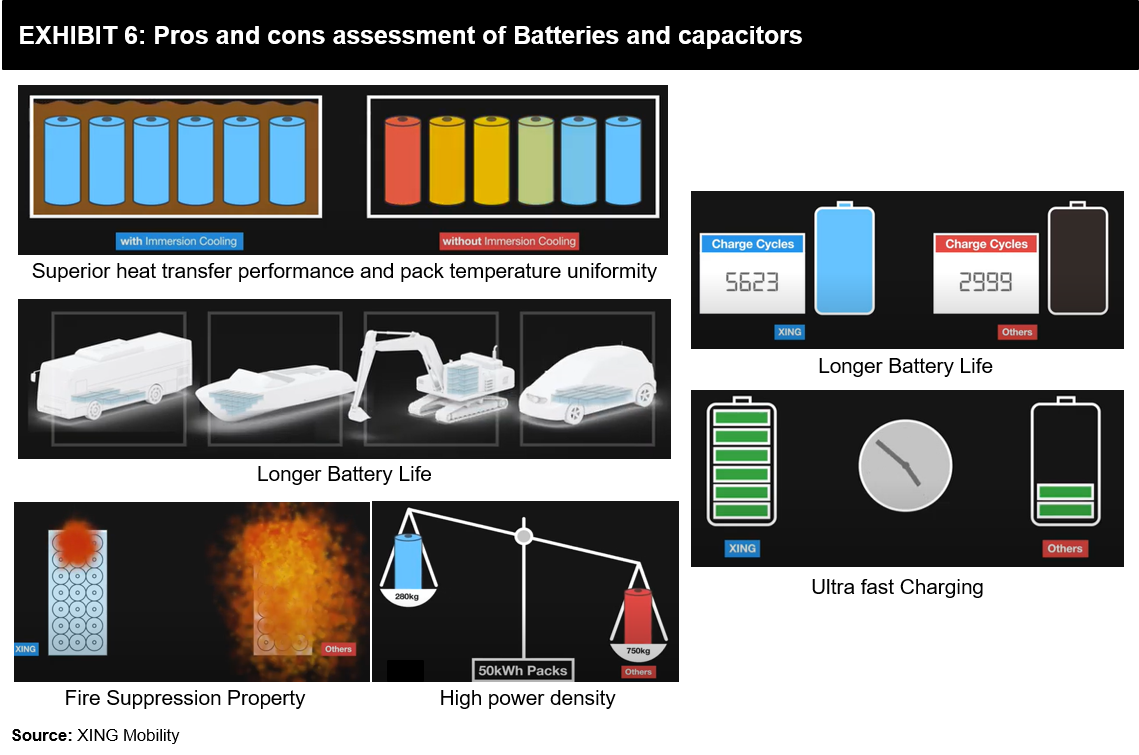 Immersion cooling has already been tried and tested in specific industries, including data centers, subsea cables, and transformers. It was initially considered an early frontrunner for EVs as well; however, this method fell behind because its chemical composition wasn’t correct at the time, and the fluid used was too strong. Although traditional battery cooling methods could be further improved and strengthened, the answer to overcoming the superfast charging problem may need a shift in our thinking about cooling. That’s why immersion cooling deserves getting renewed attention. Companies like M&I Material, Solvay, and 3M have developed specially designed dielectric fluid for EV batteries.

Although the immersion cooling technology shows promise of technically excellent performance, due to the increased weight and cost compared to currently used methods, it might be difficult for immersion cooling to reach mass production in the automotive industry. Nevertheless, regulations on electric vehicles’ thermal safety are evolving, forcing the industry to look for these alternate cooling technologies.