Home Renewable based Heating and Cooling in Europe by 2030

Renewable based Heating and Cooling in Europe by 2030

In Europe, currently, the demand for heating in buildings and businesses outweighs the demand for cooling. However, the latter is steadily catching up, because of the increasing demand for air cooling or refrigeration for food and medical supplies. As an example, by 2030 the energy required to cool buildings across Europe is apparently going to grow by over 70%, whereas the energy used for heating buildings can fall by 30%.

Europe’s energy system accounts for 75% of the total EU’s greenhouse gas emission. Europe must rethink its energy strategy if it has to become climate-neutral by 2050.

In 2019 Europe updated its energy policy framework to aid in the transition to cleaner energy so that it can deliver on the Paris Agreement commitments for reducing gas emissions.

Renewable Energy for Heating and Cooling in Europe 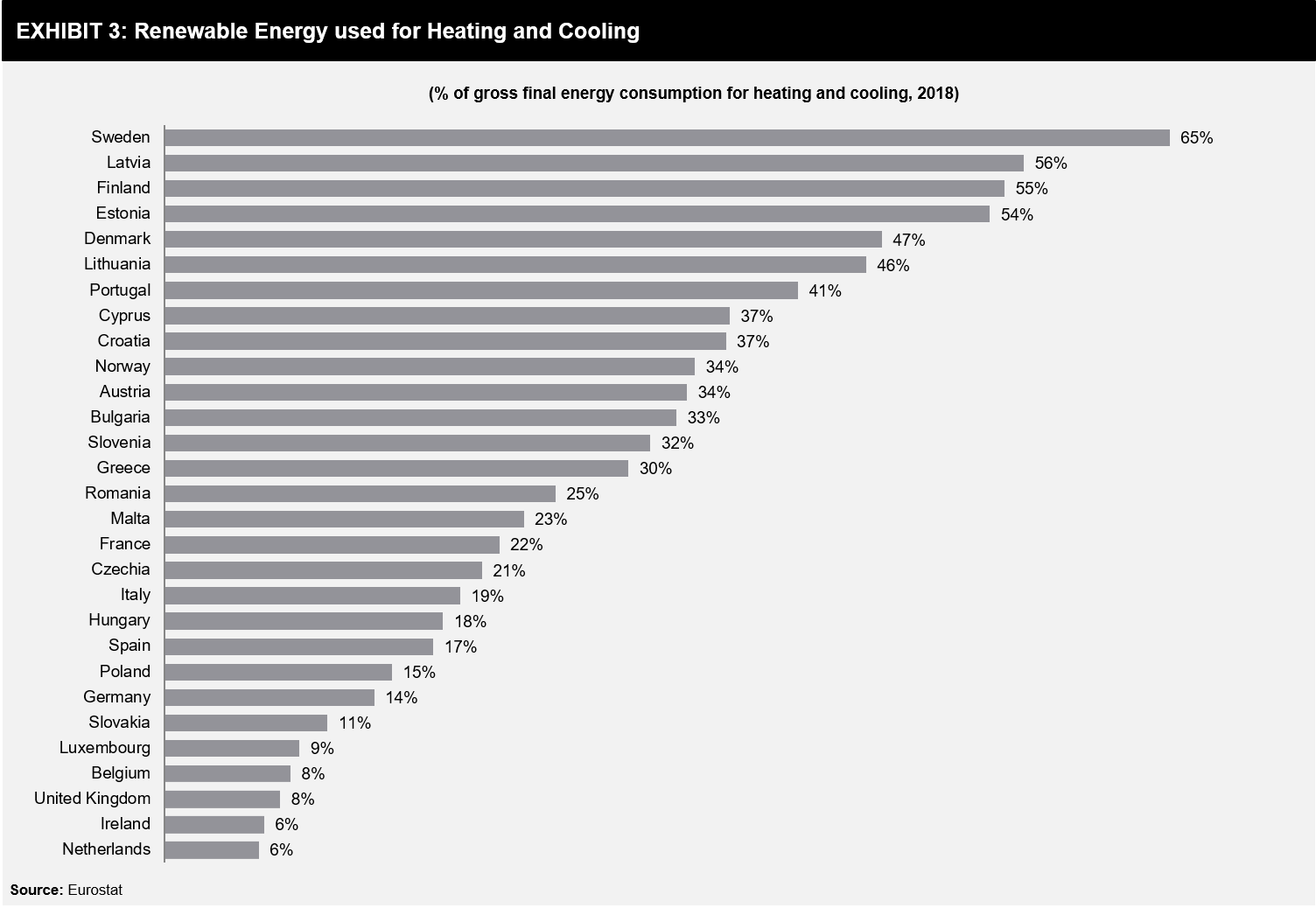 In contrast, countries like Ireland (6%), Netherlands (6%), Belgium (6%), and Luxembourg (8%), consumed the least from renewable sources for their heating and cooling requirements.

For home heating, 14 European countries use mainly renewable energy sources for heating their homes, with countries like Slovenia (59.2%), Bulgaria (59.3%), Croatia (65.0%), and Portugal (80.9%) having the largest share of renewables in their energy consumption for space heating. However, out of these 14 countries only 10 countries, some of them among the largest energy consumers of Europe, used gas as the source of energy for their heating requirement, these countries were Italy (58.4%), Slovakia (65.4%), and The Netherlands (86.2%). Other countries, such as Cyprus (63.0%), Ireland (50.1%), and Greece (43.0%) used petroleum for their space heating. Sweden mostly relies on derived heat (48.7%), and Poland uses mainly solid fuels for space heating (44.9%). 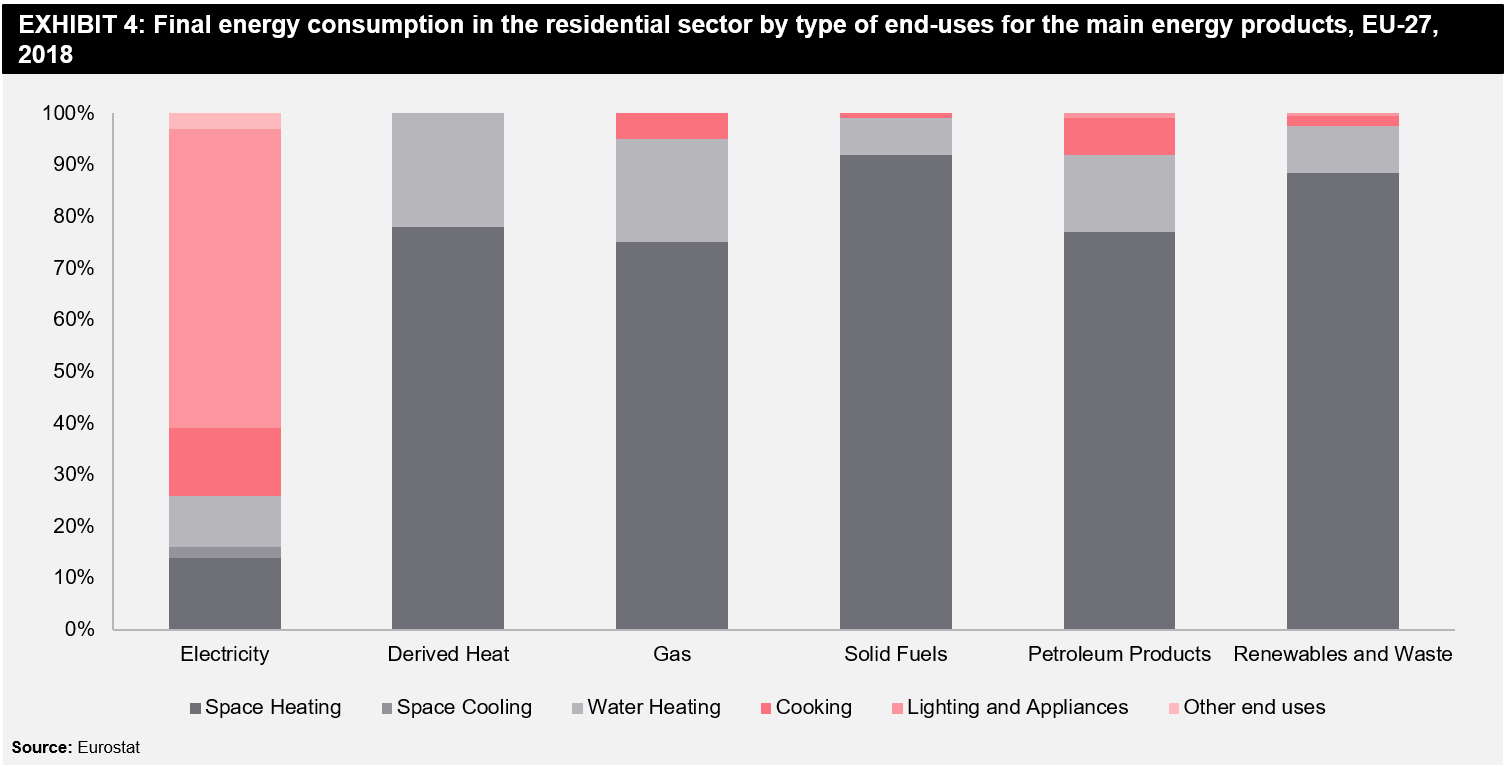 The use of renewables and the re-use of excess heat and cold are key enablers in Europe’s vision of achieving 100% renewable Heating and cooling by 2050.

In 2018, Buildings accounted for 40% of total final energy consumption in Europe, while transport and industry accounting for 28% and 23%. The main use of energy by households was for heating their homes (64% for the residential sector), with Renewable Source of Electricity accounting for 27% of space heating consumption. Heating and domestic hot water requirement accounted for 79% of total final energy use.

The shift to renewable-based heating & cooling will mainly be driven by building requirements. From 2021, The Energy Performance of Buildings Directive (EPBD) requires all new buildings to be nearly zero-energy buildings (NZEB). The buildings that will be NZEB compliant will have a bulk of its energy sourced from a renewable source, including sources produced on-site or nearby. The greatest hurdle to make building NZEB compliant lies in increasing the rate, quality and effectiveness of renovations in buildings since the current rate in Europe is a mere 1.2% per year. The renovation approaches in Europe need to ensure that the renovation rate rises to between 2% and 3% each year. A recent study found that the renovation of buildings could lead to energy savings of up to 36% by 2030.

Replacing oil and gas boilers in existing buildings, with Heat Pumps can save energy consumption by up to 50% in some cases. The European market is warming up to heat pumps, showing annual growth of 12% since 2015, the number of heat pumps sold in 2018 reached 1.3 million households. France, Italy, and Spain have contributed to almost 50% of all the sales in the European Union, while Sweden, Estonia, Finland, and Norway have punched in a year on year sales of 25 heat pumps per 1 000 households. Europe dominates the global heat pump market, by boasting with some of the largest heat pump manufacturers within the region.

Heat pumps have many advantages: They can be used for both heating and cooling; they can use electricity from renewable sources such as wind and solar that have fluctuating energy when combined with a storage system; they can act as an enabler for the operation of electric and thermal smart grids; they can act as the main heat generation system for future District Heating and Cooling systems, using natural sources as well as heat recovered from industry, and will therefore be the key technology for carbon-neutral heating and cooling in smart cities.

Europe already has a few use cases which, showcases how some countries are transitioning their energy strategy to aid Europe’s vision for 100% renewable in heating and cooling. 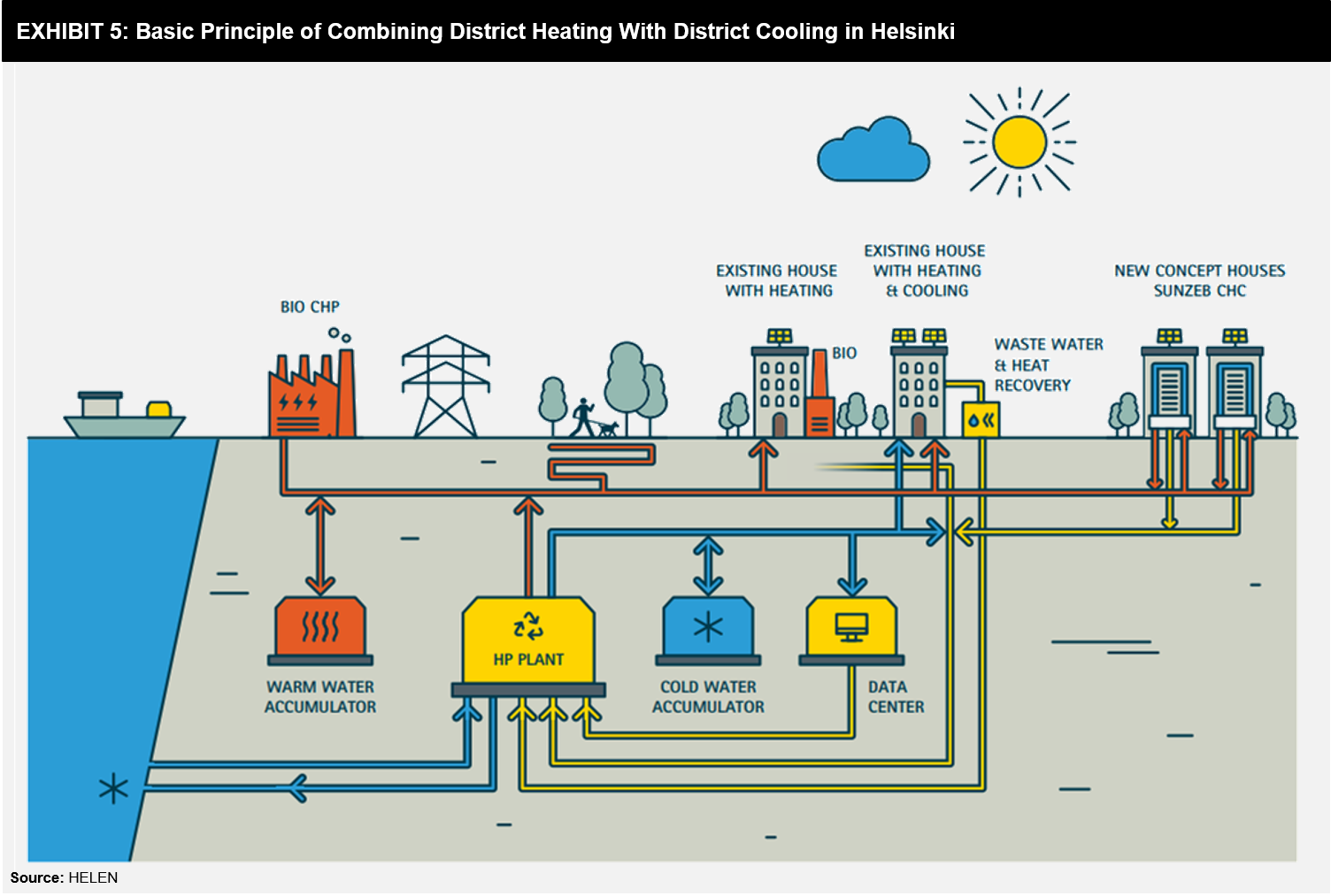 Combined Heating & Cooling (CHC) is a new integrated, highly efficient energy ecosystem where only a minimal amount of energy gets wasted. The system facilitates the recirculation and reuse of energy flows from district cooling back into the system.

The CHC system in Helsinki, Finland, is enabled by a 90MW heating and 60MW cooling pump plant station. More than 80% of the district cooling energy in Helsinki is produced from energy sources that would otherwise go unutilized. Though the system is efficient, it primarily uses Fossil Fuels.

Finland aims to increase the share of renewable energy in its energy consumption to approximately 50% by 2030. In 2017, a Medium-term climate change plan for 2030 was released, under this Finland plans to close coal-fired CHP plants gradually by 2030 and supports operators financially that switch to efficient biomass CHP and new heating technologies by 2025. What this will do is, it will reduce the district heating CHP capacity, due to the decommissioning of plants. The remaining district heating CHP plants can be converted to 100% biomass.

Heat pumps are attractive options for buildings that are not connected to district heating networks or the gas grid (concentrated in the South of the country). Finland promotes heat pumps as well; it is the 5th largest heat pump market in the European Union in terms of total numbers. The majority of installations are for ground-source heat pumps due to greater efficiencies, but recently the growth has been dominated by air-source heat pump sales.

In Finland, subsidies are focused on district heating companies and public support of EUR 90 million is made available to support biomass CHP, with EUR 45 million dedicated to non-combustion technologies, such as heat pumps

Why focus on District Heating in Europe?

In Europe, buildings are mainly supplied by distributed production units in buildings. District heating supplies 12% of the building’s total energy demand, for space heating and domestic hot water requirements. Cooling is powered by electricity, while heating is powered by fossil-fuelled individual heating solutions at the building level. In Europe, approximately 60 million citizens are served by District Heating. According to the International Energy Agency (IEA), around 11-12% of the EU’s heat demand is fulfilled by a network of 6,000 DHC chains.

District Heating provides energy efficiency by adapting heat pumps, and excess heat from industries and also promotes renewable sources, such as geothermal. District Heating can use multiple energy sources and therefore provides sector coupling. Denmark, a leading producer of offshore wind has district heat networks coupled with the power grid that can use the surplus renewable electricity produced by its wind farms. In the European Union, Sweden has the largest share of renewable heat production, which stood at 54.6% of the total energy used in 2018. District heating is a crucial component of heating in Sweden as it supplies 90% of heat demand in multifamily buildings and nearly 60% of total building heat demand. Biofuel resource gradually took over to become the highest contributor in heating applications

With rapid urbanization, with currently 72% of the European population living in urban areas, District Heating can meet the entire energy demand by 2050.

By 2050, it is estimated that the Renewable Energy Source could fulfill all of Europe’s Heating & Cooling requirements. 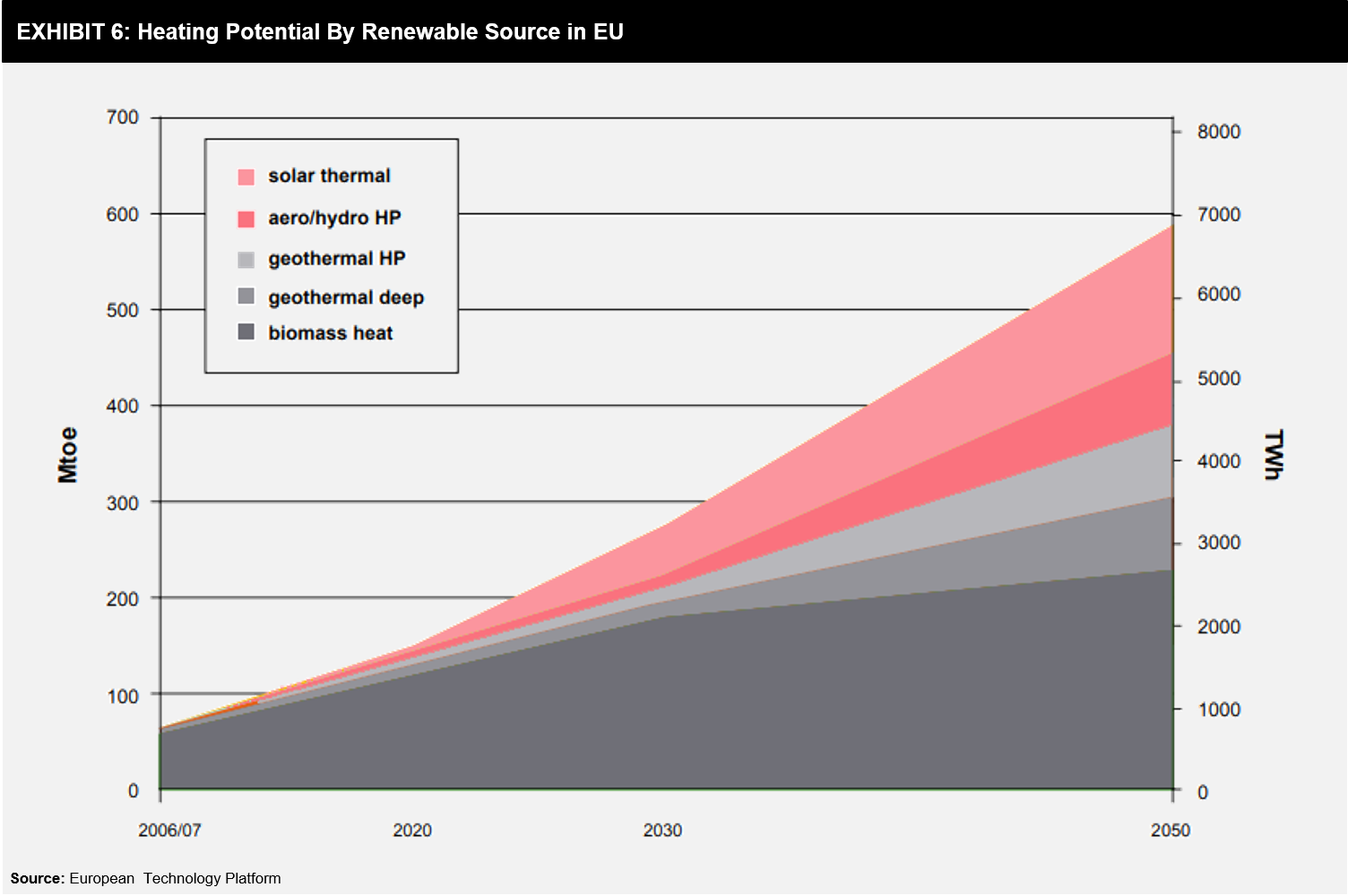