According to Jennifer Morrison, Investigator at the National Transportation Safety Board, United States, “Motor vehicle crashes continue to be a leading cause of death and injuries in the United States, killing more than 33,000 each year on average; therefore, it is an opportunity that cannot be ignored.”

It has been estimated that driving automation and Advanced Driver Assistance Systems (ADAS) are required to reduce the probability of road accidents. Autonomous cars promise benefits of improved safety, reduced congestion, and lower stress for car occupants. Autonomous technologies have witnessed rapid advancements in the recent past, and their deployment is expected in the coming years.

However, in order to truly realize the benefits associated with autonomous driving, one needs to also look at the technological enablement of the driving ecosystem. Hence, an equal focus is required on planning for infrastructure adaptation for autonomous cars. When it comes to autonomous or self-driving vehicles, intelligent controls need to migrate from the physical ground infrastructure to a distributed embedded one.

A collaborative approach is required among government bodies, OEMs, infrastructure developers, and technology developers (refer Exhibit 1) to differentiate autonomous vehicles from others, from a technological standpoint, and to make them compliant. Each entity would need to play an active role in building the required infrastructure for autonomous vehicles with the necessary support from one another. Prior to the complete replacement of conventional cars by autonomous cars, the traffic stream on roads would be required to be heterogeneous. In such a scenario, governments, transport authorities, and other local bodies need to decide on methods to implement various autonomous mobility applications or programs. 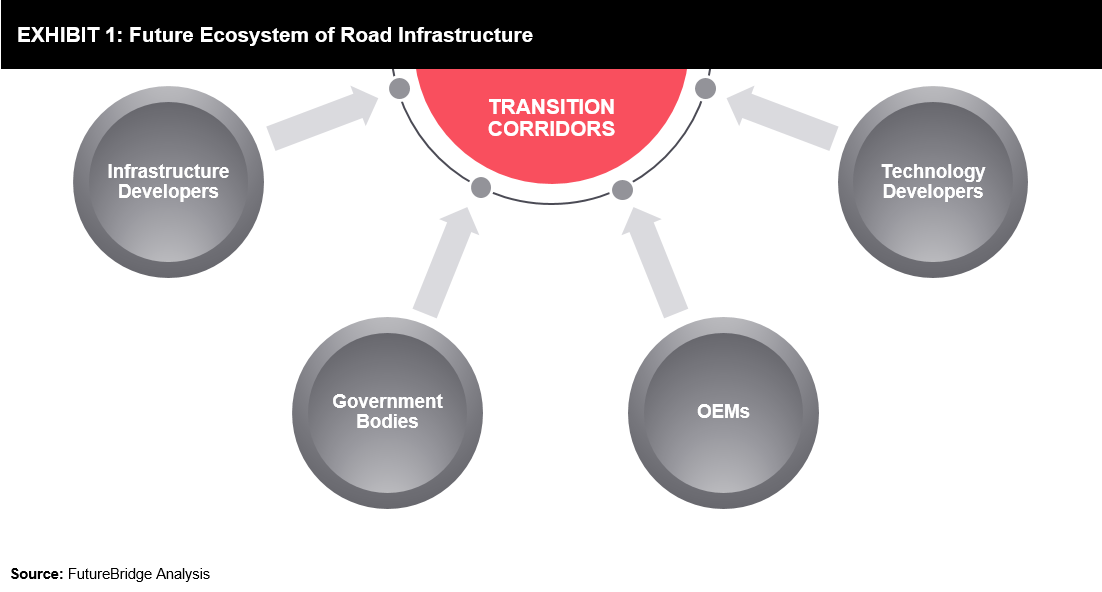 One of the methods that could adopt an autonomous scenario in a real dynamic road network is the “Transition Corridor” – a road infrastructure to support autonomous vehicles. The transition corridor will be equipped with sensors, cameras, and automatic toll readers and based on Vehicle-to-Infrastructure (V2I) communication. It will consist of bottleneck managers who will prioritize the requests and optimize trajectories to ensure timely passage while preventing bottlenecks. The benefits of autonomous vehicles, such as reducing the number of accidents, avoiding traffic jams, and driver fatigue, can be realized faster through transition corridors.

“Smart Pavement” – Prefabricated Blocks with Sensors for Building Roads: Road infrastructure companies are analyzing and adopting new techniques and technologies to develop an integrated road infrastructure system. One such technique is the “Smart Pavement” by Integrated Roadways, where a part of the road or pavement is built in sections at factories, which are then assembled on-site like “Lego” blocks. The technique is being tested in a real-world environment in Denver, Colorado (United States).

The technique uses prefabricated slab/pavement with fiber optic sensing cables to make the road “touch-sensitive” and to track real-time vehicle movement as well as monitor the overall infrastructure for efficient maintenance. This allows both the manufacturer and the respective government agency to build roads in a shorter time frame, and at the same time, manage the cost effectively.

Empowerment of Connectivity and Data Collection: Data collection and connectivity form a crucial part of autonomous vehicles. The data collected from vehicles, surrounding environment, and infrastructure plays a vital role in safety, maintenance, and overall incremental adoption of the technology itself. In the near future, Big Data analytics is anticipated to significantly grow as the number of connected and autonomous vehicles increase. Automakers will be able to leverage the advantages of Big Data analytics in autonomous vehicles to identify problems, track vehicle speed in real-time, and monitor fuel consumption as well as other parameters of interest. More efforts will be devoted to enabling Big Data solutions to analyze data streams and provide actionable information to address flaws.

As digital road infrastructure requirement increases, transportation authorities and government bodies will be forced to enhance the capacities of their data management and communication networks. Currently, companies are working on advanced systems for collecting and protecting the data/network security. Infrastructure agencies/companies will be able to obtain optimal data, which will assist them in developing and building an optimized, flexible transportation model, thereby increasing the efficiency of current and new infrastructure.

Road Map towards Smart Infrastructure: Technology leaders are developing state-of-the-art solutions, software, and products for a smarter infrastructure. However, one of the major hindrances is the lack of interest and initiatives undertaken by government bodies for the development and adoption of these novel technologies. These technologies are expected to radically impact and revolutionize the wellness, overall infrastructure, and disrupt the overall transportation ecosystem. In a few developing and underdeveloped countries, government bodies lack the basic knowledge of these technologies. This is a major hindrance to wide-scale technology adoption.

The only possible way forward is for both the private and public sectors to collaborate and foresee the rise of autonomous vehicles and smart infrastructure. The issue that tends to spike the interest in future road infrastructure projects is an increase in the number of road accidents. There is enough data to showcase that the infrastructure itself can reduce the number of such cases. The next step is to bring in a pre-emptive “strike” scenario where, based on data gathered in terms of how vehicles travel on such roads, modifications can be done before the accident takes place. With technological improvements and smarter infrastructure, there is a slow emergence of a new business model focused on “data.” The massive volume of data collected can eventually be sold to OEMs or even infrastructure companies who could analyze and determine what their future products should encompass. Moreover, the monetization of this data itself can become paramount to financing the roads to a certain extent, thereby providing another push towards a smart infrastructure.

Automotive supplier wanted to understand current CO2 emission regulations and their impact on their existing and future product portfolio . . . The content is restricted to premium users only. Please sign...
READ MORE >
Mobility

Mobility major investigated current and future state of the Electric vehicle ecosystem in Europe with regards technology and market evolution . . . The content is restricted to premium users only. Please...
READ MORE >
Mobility