Quantum computing is the area of study focused on developing computer technology based on the principles of quantum mechanics, which explains the nature and behavior of energy and matter on the quantum (atomic and subatomic) scale. It is computing using quantum-mechanical phenomena, such as superposition, entanglement, tunneling, etc.

As of 2019, the development of actual quantum computers has been in its infancy stage; however, experiments have been carried out wherein quantum computational operations were executed on a very small number of quantum bits (Qubits). The development of a quantum computer, if practical, would mark a leap forward in computing capability far more significant than that from the abacus to a modern-day supercomputer, with performance gains in the billion-fold realm and beyond.

An ordinary computer works on the binary system that is 0s and 1s. Whatever task one wants it to perform, whether it is calculating a sum or booking a holiday, the underlying process is always the same. An instance of the task is translated into a string of 0s and 1s (the input), which is then processed by an algorithm, whereas quantum computing takes advantage of the strange ability of subatomic particles to exist in more than one state at any time. Due to the way the tiniest of particles behave, operations can be performed more quickly with the use of less energy than classical computers.

Quantum systems could seamlessly encrypt data that have been collected and solve complex problems, such as medical diagnostics and weather prediction, which even the most powerful supercomputers cannot perform. These systems apply the properties of quantum mechanics to process information. Operating with nano-scale components at temperatures colder than intergalactic space, quantum computing encompasses the potential to solve some of the world’s toughest challenges. Moreover, quantum computers may enable new discoveries in the areas of healthcare, energy, environmental systems, smart materials, and beyond.

Post the idea of exploiting quantum mechanics for real-world applications, outbursts happened through Richard Feynman’s lecture in the 1980s, expressing the idea that quantum computers had the potential to simulate things that a conventional or classical computer could not. Physicists and scientists came up with different algorithms and schematics for building a quantum computer given its advantages over classical computers due to the principle of superposition and quantum entanglements. The first-ever application of the quantum computer was however ideated 20 years prior to this outburst when Stephen Wiesner invented conjugate coding where the application could be used for creating fraud-proof banking notes. The coding was based on the principle of quantum multiplexing, a method of transmitting messages in such a way that reading one message can destroy the others.

Presently, quantum computers are in existence, the first commercial ones built by the company, D-Wave Systems. Since then, these new generation computers are being used and developed by many technology giants, namely IBM, Microsoft, Google, and Intel, among others. Applications are varied, with D-Wave currently using quantum computing for solving optimization problems. Another critical application is machine learning, as a large amount of data needs to be processed coupled with numerous potential combinations of data elements, owing to which, quantum computing approach can be used very effectively in this domain. Monte Carlo Simulation is also explored using quantum computing, where the mathematical model calculates all possible outcomes of decisions and assess the impact of risk, allowing for enhanced decision-making under any potential uncertainty. Playing with the chemistry of different elements, creating, or rather, simulating new materials and drugs is also being explored using quantum computing. 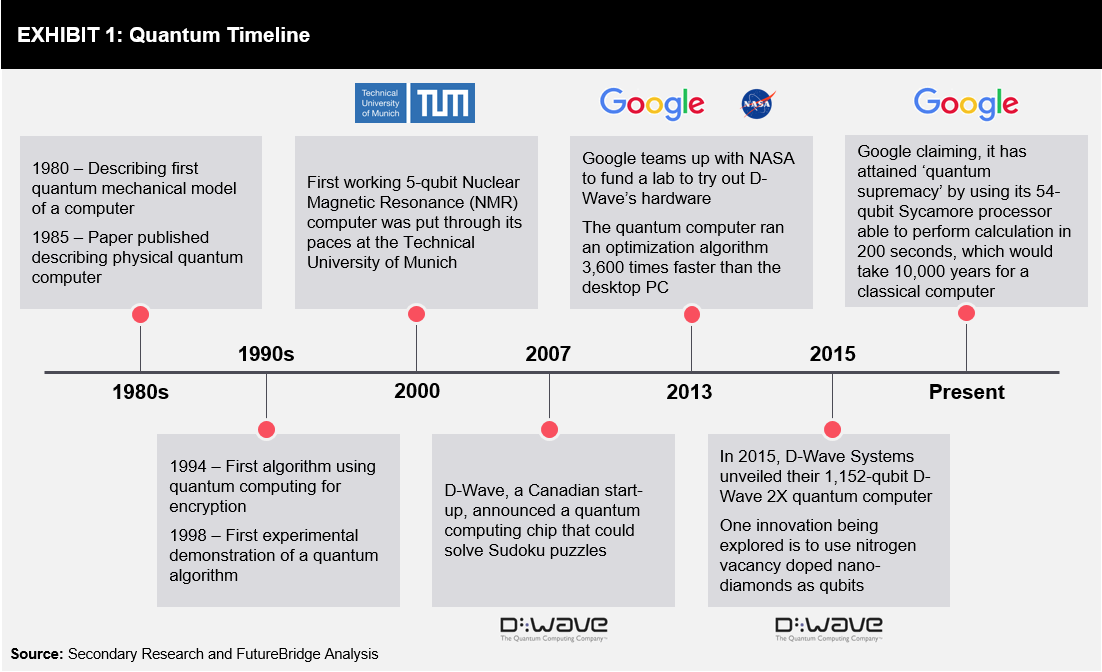 The ability to simulate complex chemical systems is another major application of quantum computing. It involves discovering the right catalyst or process to develop a new material or modifying an existing material using quantum computing. Presently, many of the drugs are developed by expensive trial and error methods, and thus, there is a need for a more effective way of simulating drug reactions. D-Wave is involved in material simulations; the company has simulated two types of materials using quantum computation. One simulated the physics of two-dimensional magnetic material identifying a transition in which whirlpool-like defects known as vortices pair up in the material when the temperature drops; and the other replicated the behavior of a 3-D material that transitioned between different magnetic phases when researchers changed variables, such as an applied magnetic field. 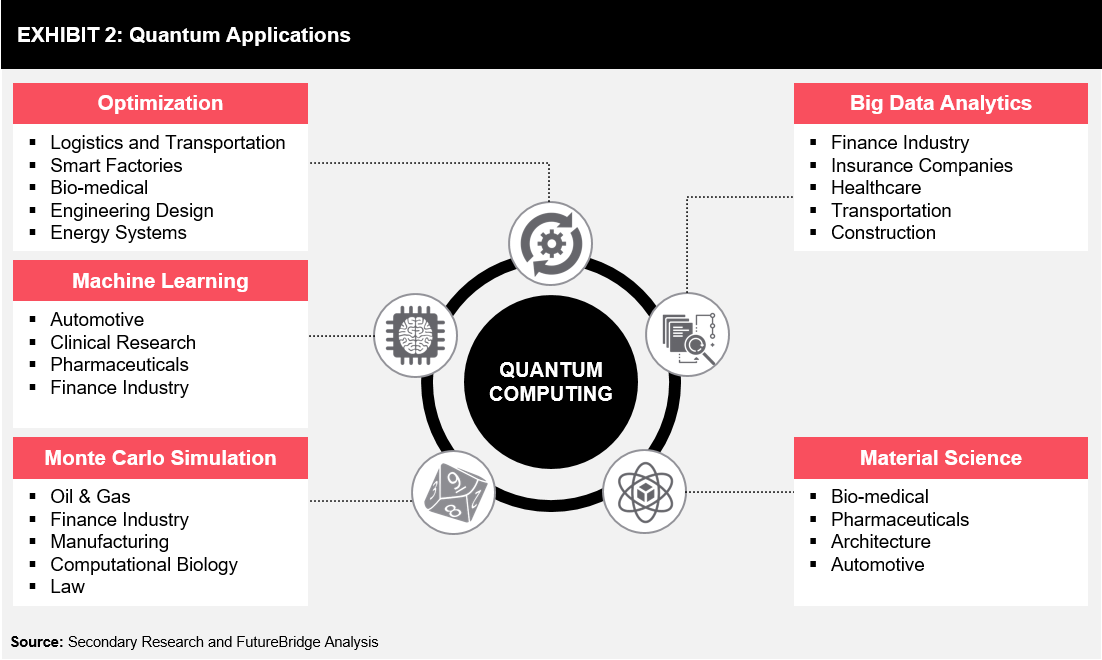 Apart from designing and simulating new types of materials, quantum computing encompasses the potential to reinvent the method of molecular comparison by developing inventive methods to analyze large-scale molecules, thereby designing new types of drugs. Accenture and Biogen experimented and proved that quantum-enabled methods for molecular comparison were better than the existing methods; quantum-enabled methods have a high potential to improve drug discovery and patient’s outcome significantly.

Big Data Analytics is witnessed as a potential application for quantum computing, enabling organizations to sample a large amount of valuable data and optimize them for all types of uses. Quantum computing can be used for searching very large, unsorted datasets and identifying data patterns or anomalies at high speeds.

Google, IBM, and a handful of start-ups are competing to create the next generation of supercomputers. The emergence of quantum computing might help solve problems, such as modeling complex chemical processes that the existing computers cannot handle.

D-Wave Systems Inc., a Canadian company, became the first to sell quantum computers in 2011, although the usefulness of quantum computers is limited to certain kinds of math problems. IBM, Google, Intel, and Rigetti Computing, a start-up in Berkeley, California, have collaboratively created working quantum computers for businesses and researchers.

Intel has started shipping a superconducting quantum chip to researchers. It has also created a much smaller, but so far, a less powerful quantum computer that runs on a silicon chip, which is not all that different from those found in normal computers.

Microsoft initiated a well-funded program to build a quantum computer using an unusual design that might make it more practical for commercial applications. Airbus Group also established a team in 2015 to tackle quantum computing at its site in Newport, Wales. Airbus’ Defense and Space unit’s main objectives was to study all technologies related to quantum mechanics, ranging from cryptography to computation.

In September 2015, the Institute for Nano Quantum Information Electronics at the University of Tokyo, in collaboration with Fujitsu Laboratories Ltd., and NEC Corporation, announced that they achieved quantum key distribution for securing communications at a distance of 120 kilometers using a system with a single-photon emitter.

In 2015, Toshiba announced that genome data from Toshiba’s Life Science Analysis Center was slated to be encrypted by a quantum communication system and transmitted to Tohoku University’s Tohoku Medical Megabank Organization.

Although there are several applications of quantum computing superior to classical computers, there are certain limitations with regard to the use of quantum computers. Firstly, quantum computers at present are too large and they require near absolute zero temperature for effective function. This may hinder the portability and commercial adoption of these computers. Secondly, qubits are extremely susceptible to noise; any disturbance in temperature, electrical energy, and sound energy will destroy the qubit’s superposition state. Lastly, these qubits are present for a very short period of time, which means the computation should be carried out as quickly as possible after the formation of qubits; otherwise, due to de-coherence, the qubits will get destroyed and change into classical bits.

Apart from the above-mentioned challenges, the development of quantum algorithms for effective resolution of various computations problems serves to be a significant challenge.

Quantum computing is currently in its nascent stage; it does not appear to have significant benefits in many computational problems compared to classical computers. Several experiments performed on a small-scale quantum computer hints that the performance of these computers may be better and faster than conventional computers. Numerous applications are being proposed by researchers, physicists, and experimentalists for using quantum computing; a few applications look a well-fit for the technology, while some may need special requirements, such as a number of qubits, specialized hardware, etc.

With the inclusion of artificial intelligence in quantum computing, many new applications may emerge in the near future. There may be numerous machine learning algorithms that would work only on a quantum computer. There could also be a possibility of new quantum computers working on a different principle, which may be faster than quantum annealing or gated quantum computing.

There are endless possibilities for improving the capability of a quantum computer. Conventional computers have been existing for more than a century, the result of which, there has been a revolution in industries. One can only imagine the revolution a mature, portable, efficient, and optimized quantum computer can bring, which would then open up new industries entirely and move the world into the next era of computation.