What is all the Buzz about Crude-to-Chemicals?

Crude oil is a primary source of energy, and oil refining is a key aspect of the global energy system. Transportation fuel (e.g., gasoline, diesel, and fuel oil) accounts for approximately 50% share of the products produced from refineries. Therefore, refinery margins that depend on the difference between the prices of crude oil and oil products are tied to the demand for transportation fuels. Refineries have experienced fluctuations in their margins over the last few years. Presently, refineries are facing an array of new challenges, some of which are elucidated below:

Integration of Petrochemicals with Refinery 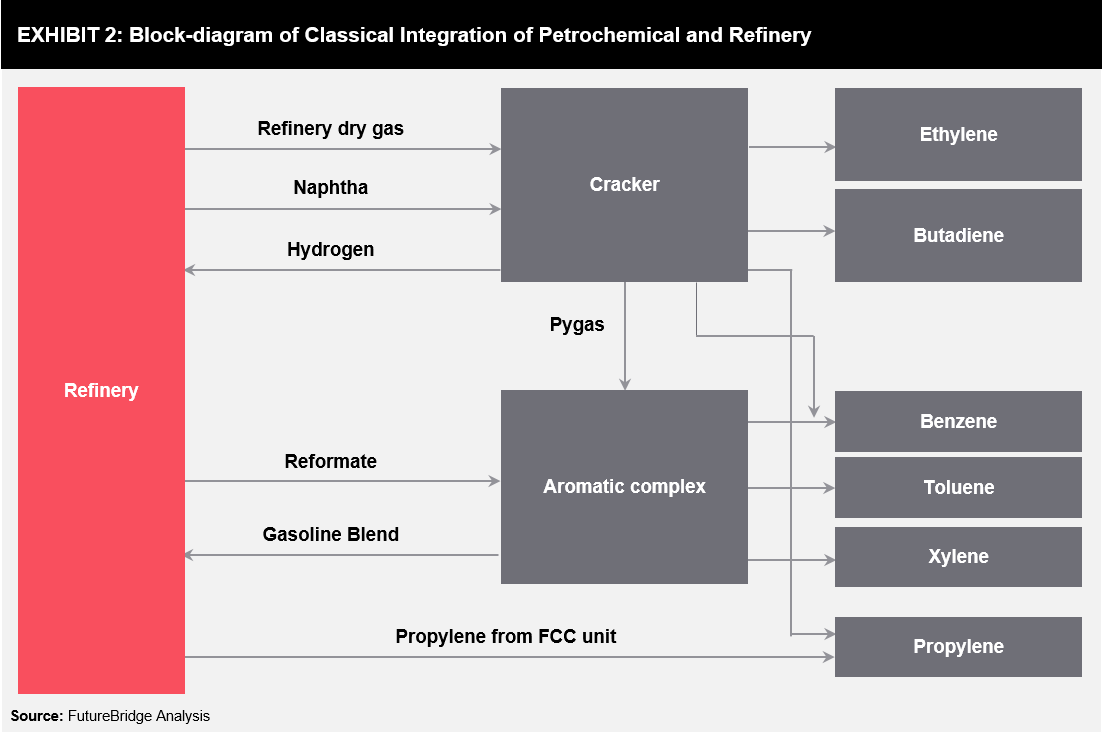 The conventional refinery set up was more focused on maximizing the production of transportation fuels. Crude oil-to-chemicals (COTC) technology allows the direct conversion of crude oil to high-value chemical products instead of traditional transportation fuels. It enables the production of chemicals exceeding 70% to 80% of the barrel producing chemical feedstock as opposed to ~10% in a non-integrated refinery complex. Exhibit 3 highlights the level of integration in refineries. 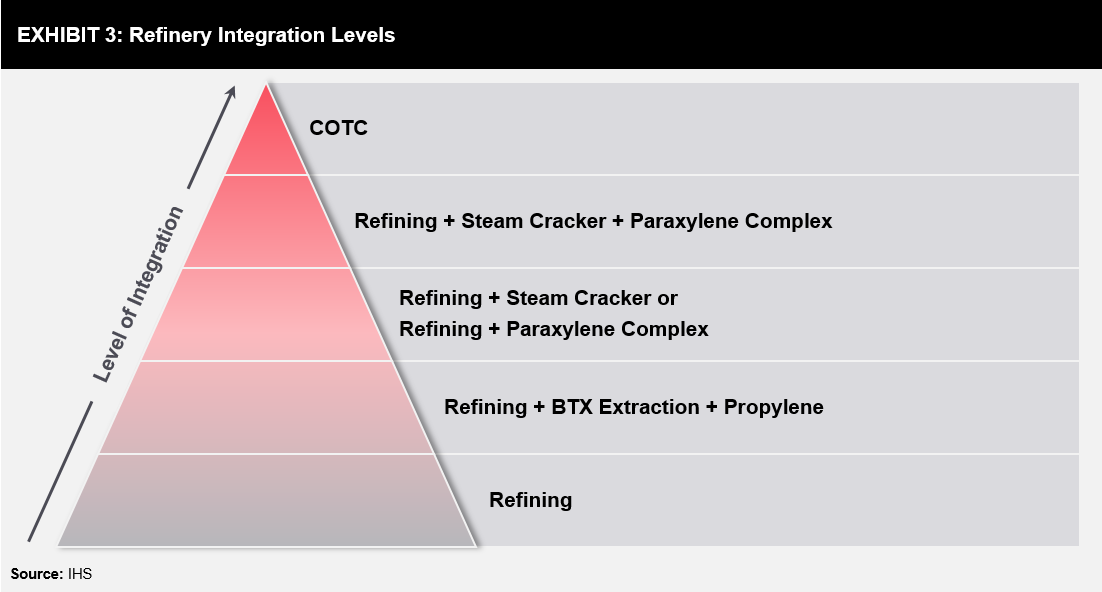 A majority of COTC plants that have been planned or have started operations are based in China or the Middle East. The choices of technology for the COTC plant depend on the type of feedstock available for processing and end-products being produced in refineries. COTC plants are primarily focused on increasing the yield of light olefins or aromatics, such as benzene, toluene, and xylene. It is observed that following the three strategies listed below are being predominantly used in COTC plants.

Processing of middle distillates and residues using hydrocracking technology: This type of processing strategy is adopted by Hengli Petrochemical Ltd. It involves hydrocracking of diesel and products from the vacuum distillation unit to produce naphtha range stream, which can later be processed to produce aromatic compounds. 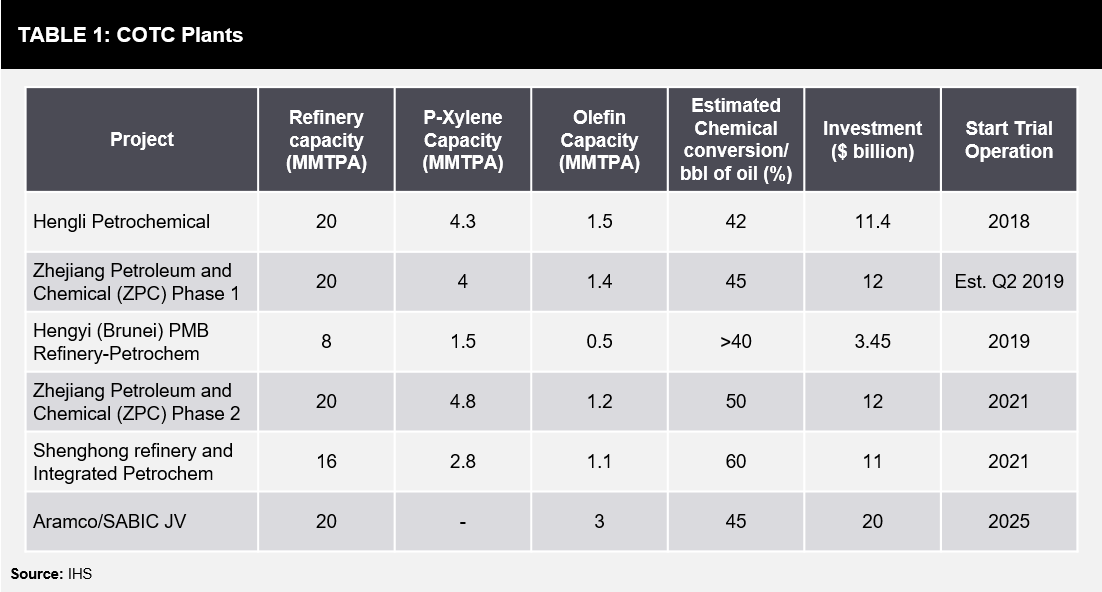 ExxonMobil COTC: ExxonMobil uses its proprietary technology that allows the processing of light crude oil directly in the steam cracker, producing high-value petrochemical feedstock. It was officially launched as the world’s first chemical unit that processes crude oil in Singapore in 2014. The process involved pre-heating of the crude oil, partially vaporizing the heated crude in a flash tank and feeding the vapor from the flash tank to the steam cracker to produce ethylene, propylene, and related products. This process allows ExxonMobil to take advantage of the crude-naphtha spread. It is economically viable, mainly in the case of light crudes with low resid content. The key advantage of the process is that it requires low capital investment per project. However, the amount of chemicals produced are limited in comparison to plants/projects that are being operational or planned in China and the Middle East.

Hengli’s Refinery-Paraxylene Complex: The plant started by Hengli Petrochemical maximizes the production of paraxylene. It has achieved a full trial operation in May 2019. The plant is capable of processing 20 million bbl crude oil per year. The following technologies for Hengli’s refinery complex are supplied by Axens. 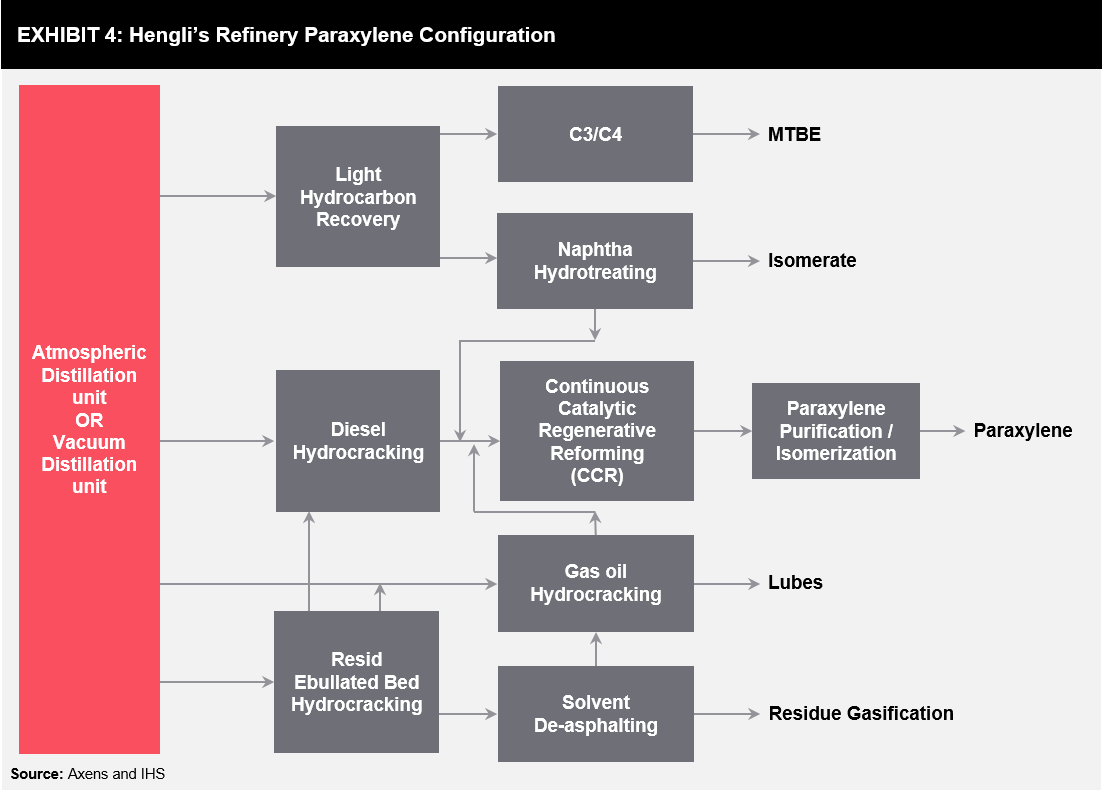 Saudi Aramco and SABIC COTC: Aramco and SABIC are partnering for the establishment of a COTC plant, which will process 400,000 barrels per day of Arabian Light crude oil to produce approximately 9 million tons of chemicals per year. The plant, considering its crude oil processing capacity and chemical production rate, is expected to have a 50% conversion rate. The plant is scheduled to start operations by 2025. The estimated investment cost for the plant is approximately $20 billion. 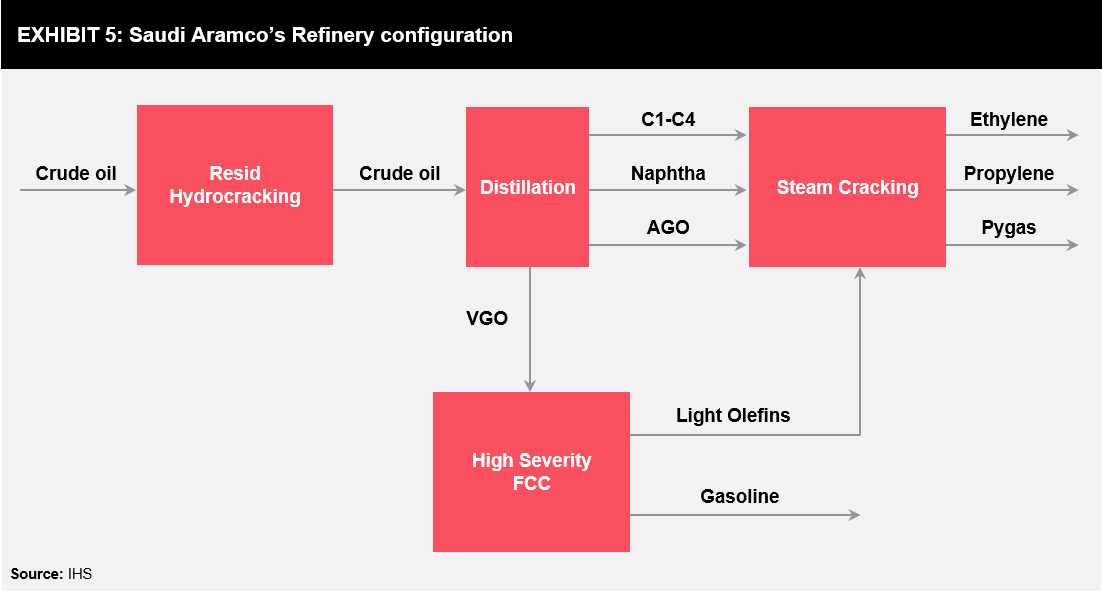 Aramco is also exploring other technologies for producing chemicals from crude oil. The company partnered with Chevron Lummus Global (CLG) and CB&I (presently known as McDermott) to integrate CB&I’s ethylene cracker technology, CLG’s hydroprocessing technologies, and Saudi Aramco’s Thermal Crude-to-chemicals (TC2C) technologies, with a target of converting 70-80% per barrel of oil to chemicals.