Energy markets have started to react

As we write this piece, it is unfortunate that the number of infected people around the globe has already crossed the >200,000 mark, and the total number of reported deaths has surpassed >8,500 mark (source: worldometer, accessed on March 18, 2020). A quick view of different regions suggests China, Italy and Iran being the worst affected nations, followed by many other large economies of EU, North America, ME, and, Asia-Pacific, taking the toll of nations affected with this deadly virus to >110 countries. On its March 11th meeting, the World Health Organization (WHO) declared the virus outbreak as “pandemic” in nature.

As the global economy starts to reposition itself to deal with the current, and after-effects of the pandemic, one thing is very clear at least for the next two-three quarters – we are heading for a slow-down. The velocity and scale is yet to be determined, however, a lot will depend on how the interplay of the virus and society’s response might unfold. For now, the global economy has already started to experience shivers in many parts, including the Airlines, Travel, Hospitality, etc. industry facing a direct impact, followed by an indirect impact in other sectors such as Oil and Gas, Banking, and, Mobility, to name a few.

Oil and Gas are fundamental to the growth of any economy, hence, any downward movement will have a trickle-down effect in the way societies behave. Oil prices have already slipped by 40% in the last one-two weeks, the most in many years (Exhibit 1). The recent OPEC+ decision, led by Saudi Arabia, could not result in any fruitful conclusions for the oil markets, primarily due to Russia’s reluctance to participate in any price cuts. This has further dampened the scenario leading many small to mid-sized producers at the risk of full or partial closures. What could follow next is a prolonged period of low oil prices, given that Saudi has agreed to ramp-up its production beyond 10 million barrels per day, in a move to counter Russia’s growing dominance in these tricky situations. This move may further result in increased unemployment in the energy sector, followed by a low earnings period for nations with high oil dependency. 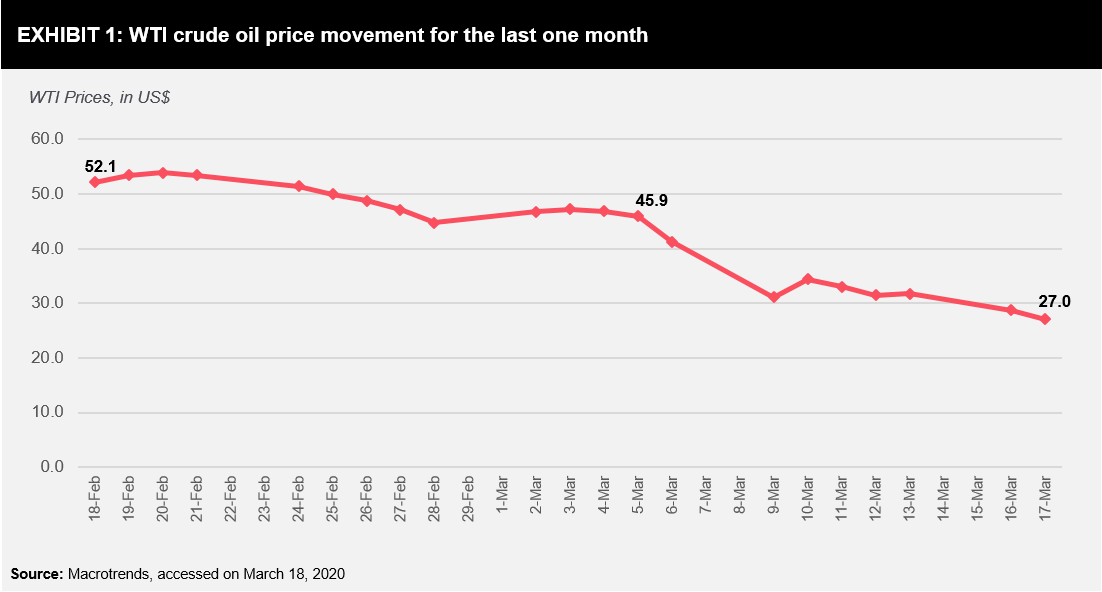 What lies in the future?

There will be many far-reaching implications for the Oil and Gas industry, some of which have already started to unfold, starting with the oil price war, which will eventually have no clear winner. When the world’s two largest oil-producing nations engage in price wars, instead of mutually cooperating in such difficult situations, both, tend to lose. Though, some oil-dependent economies may benefit in the short run, but, at this stage, it is hard to assess how demand patterns in the world’s largest consuming nations would flare in the future. Most economies will see a fall in demand.

IEA in its latest crude oil demand forecast predicted that the global average oil demand in 2020 will fall by 90,000 BPD y-on-y. This is the first annual fall post the 2008 economic crisis. IEA’s executive director Fatih Birol even went ahead and stated, “The coronavirus crisis is affecting a wide range of energy markets, including coal, gas, and renewables, but its impact on oil markets is particularly severe because it is stopping people and goods from moving around, dealing a heavy blow to demand for transport fuels. This is especially true in China, the largest energy consumer in the world, which accounted for more than 80% of global oil demand growth last year.”

There is a far greater challenge that lies ahead for the industry, which was already struggling with the climate change issue. Fall in oil prices is expected to dampen industry’s investment outlook for green technologies, we have already started to see how a prolonged virus outbreak situation in China can hurt industry’s dreams of being carbon neutral. Of the top 10 solar cell manufacturers, nine are based in China and one in South Korea. Its current solar module production capacity stands at a whopping 73% of the world’s total, making it vulnerable to any sort of supply shocks.

For the oil-rich nations it’s a question of sustaining production, cutting costs, and still being able to control the spread of the virus. This double whammy situation of falling prices and parking money to fight the virus outbreak will dent the economics of nations with high oil and gas dependency. Many Persian Gulf nations have already announced a series of measures to fight the virus outbreak: Qatar has announced a $20.6 billion stimulus package, UAE – $27 billion, and Saudi Arabia – $13.3 billion.

The North American Oil and Gas industry, which had in the last five years adjusted itself the $50-60/barrel range, will see the heat coming as WTI prices fall to a new low of $30/barrel, and continues to fall further. Pure play independent producers, and producers with large associated natural gas production portfolio, are expected to suffer the most. As demand decreases further, and the banking system suffers, many companies will be pushed to the edge of filing for bankruptcies, a scenario which might be similar to the 2014-16 slowdown. However, an election year down the line, it may raise hopes for many industry participants to receive some central aid. Trump’s government is already pushing hard for a $1 trillion stimulus package to keep the markets calm and ease some pressure.

Certainly, it will be testing times for the industry, and survival of the fittest seems to be the most appropriate phrase. China has already started to show some signs of resilience, but, that cannot yet be considered a sign of recovery for the O&G markets. Players who have diversified to multiple energy options may be better placed than others, however, extreme financial discipline will be mandatory for all. 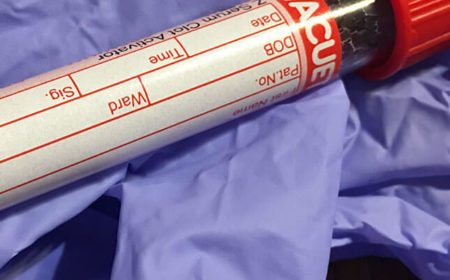