Home Changing the Future of Mobility with Passenger Drones
Blog

Changing the Future of Mobility with Passenger Drones

In June 2019, Melbourne was revealed as Uber’s first international ‘Uber Air’ pilot city. The Australian city will join Dallas and Los Angeles in the US as pilot cities for the ‘Uber Air’ program, which aims to begin flight test by 2020 and plans to commence commercial operation from 2023.

Uber is not the only one; several other companies (including aircraft and automobile manufacturers and various new start-ups) have announced dates for the expected trial and commercial launch of their passenger drones. The technology and product development of passenger drones seem to be progressing rapidly.

The conceptualization of passenger drones or flying cars is no longer a new trend, as development in this area was started way back in the 1980s (refer Exhibit 1). Since then, several companies have launched different prototypes that are capable of Vertical Take-off and Landing (VTOL). 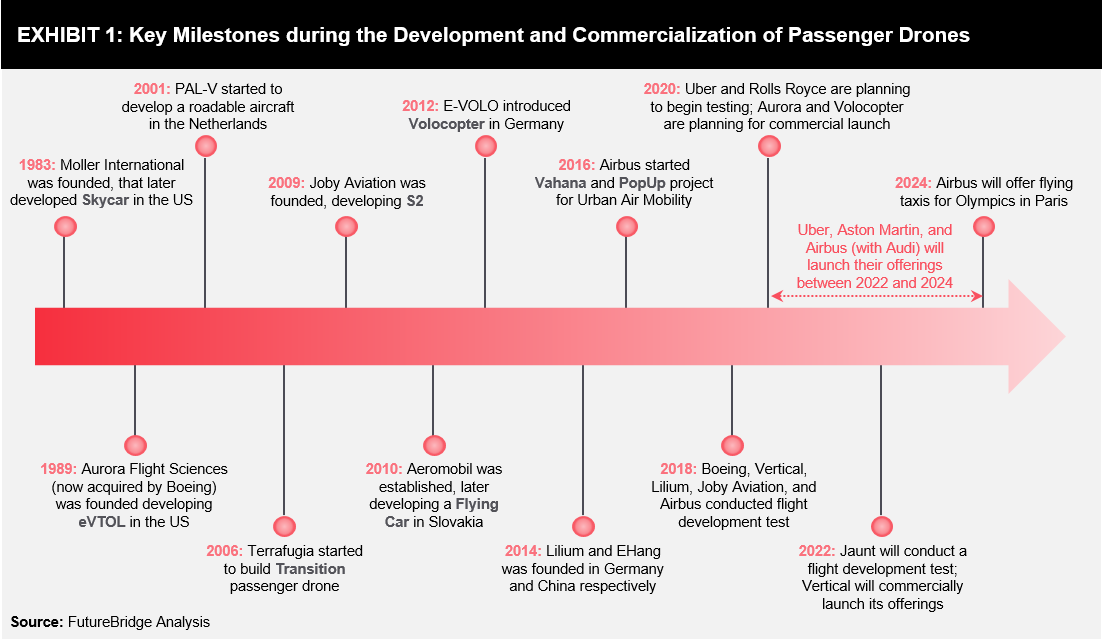 VTOL vehicles do not require a runway to launch and can accommodate two to five passengers simultaneously, thereby being more energy-efficient than helicopters. These vehicles are powered by hybrid-electric or fully-electric motors and can either be manually piloted, remotely piloted, or fully autonomous.

Examples of start-ups that conducted passenger drone testing are listed as follows:

EHang, a Chinese-based startup, tested its autonomous quadcopter passenger drone, EHang 184, in January 2018. The company conducted over 1,000 flights with human passengers, carrying a total weight of 230 kg over 15 kilometers (refer Exhibit 2). The test also included a vertical climb of over 300 meters. 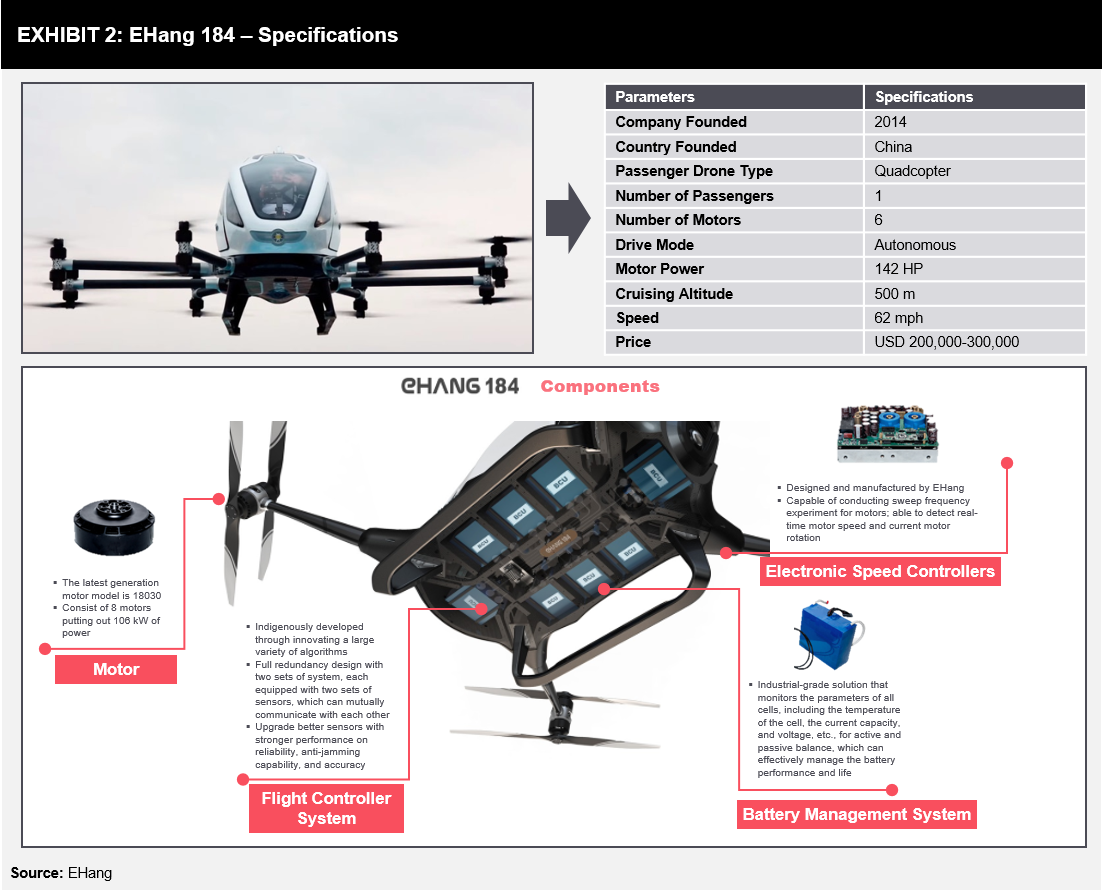 EHang 184 is a low-altitude autonomous aerial vehicle, which can offer medium-to-short distance transport. For any malfunction or disconnect of EHang 184 components, the vehicle would land in the nearest possible area, ensuring passenger safety.

Another start-up that is involved in the development of passenger drones is a German company named Volocopter (previously named E-Volo). Volocopter tested its multicopter passenger drone, Volocopter 2X, in 2017. The drone is a two-seater, 18-rotor unmanned electric flying vehicle (refer Exhibit 3), which can fly autonomously or operate using a joystick and assistive systems for support. 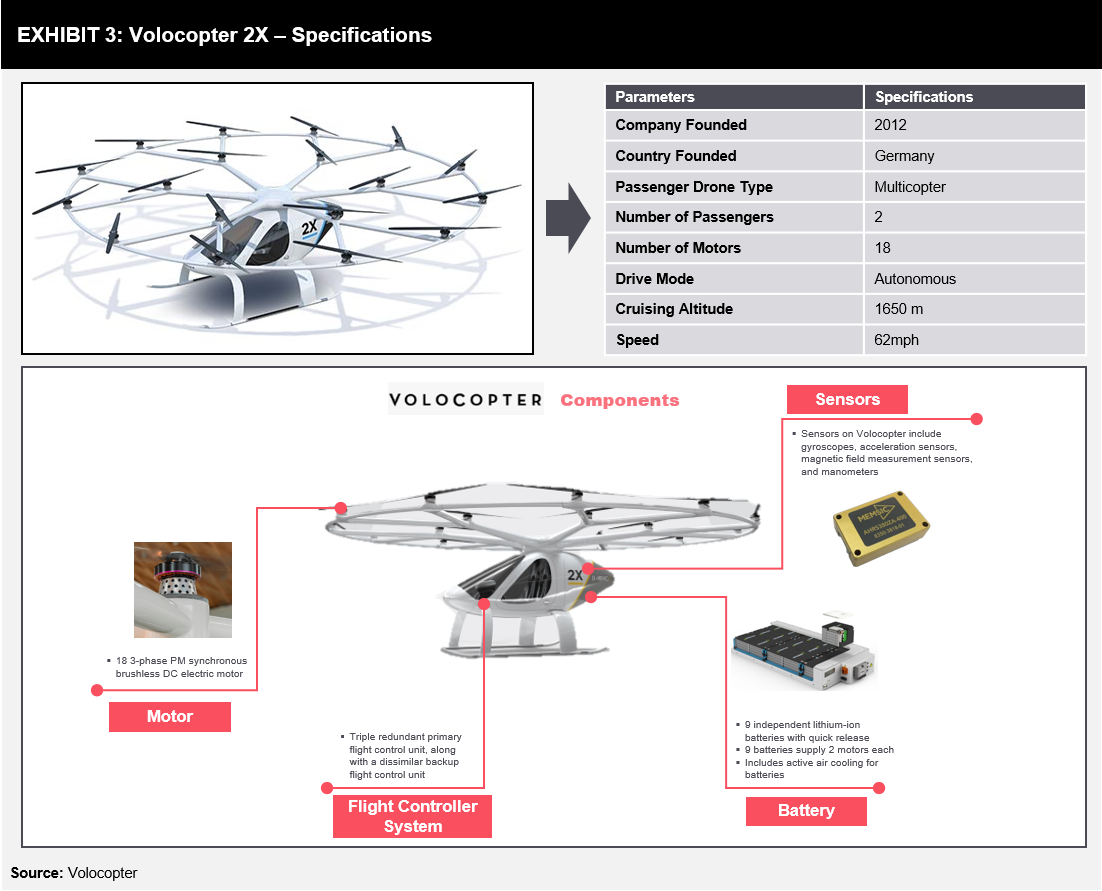 The emergence of passenger drones is witnessed as a major trend in the mobility sector, transforming the way people move around. This new class of vehicles can play an important role in the mobility sector, as they are fast and provide an effective alternative to clogged land transportation. In the long-term, passenger drones can become an attractive and competitive substitute for covering distances greater than 20 km, as they require relatively fewer infrastructure investments as compared to the already available air transport systems.

Drones can save a significant amount of passenger time as compared to taxis, buses, metros, and railway lines. They can be utilized in cases where distance is greater than 25 kilometers, delivering genuine-time savings and becoming the fastest urban mobility option. However, to achieve the fastest urban mobility status, passenger drones should have reasonable fares and offer safe travel experience.

Drones in the future will work in conjunction with other transport modes (refer Exhibit 4), offering passengers seamless connections from their pick-up location to a Vertiport A (spot from where a VTOL drone takes-off) and then to the other Vertiport B, and finally to their destination.

A superior door-to-door service would be provided, wherein customers would be picked up from several locations and bought to the Vertiport A. This would be done by using the available transport modes, including bikes, cars, buses, and subways. Once they have reached to the Vertiport B, transportation for the last-mile journey would also be arranged using the available transport modes. Customers would be able to make reservations and pay for the drone ride using an online application.

Trial services have been launched across multiple locations (refer Exhibit 5) to gauge technical and regulatory challenges as well as understand the feasibility and implementation of passenger drones. 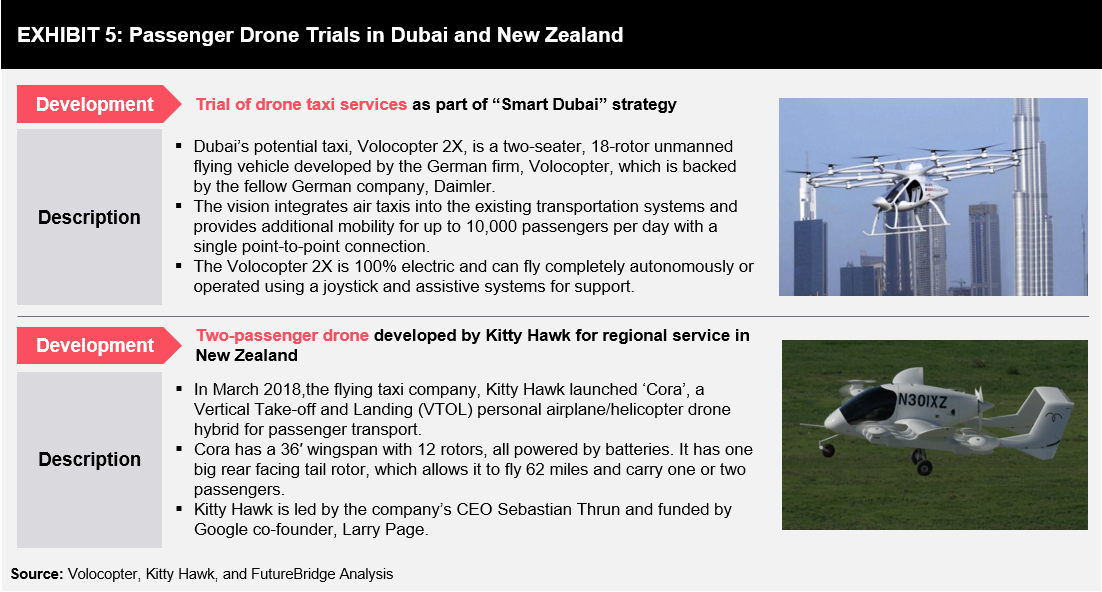 Several technological advancements listed below are expected to aid the commercialization of passenger drones.

Passenger drones in an urban environment can be used for three key applications (refer Table 1):

The advent of passenger drones would bring new opportunities for drone manufacturers as well as fleet operators. FutureBridge estimates that the commercialization of passenger drones will start by 2020, with total operational units amounting to 450 in 2025 (refer Exhibit 6). This figure is anticipated to witness exponential growth, reaching 18,000 units by 2035, registering a CAGR of 45%. 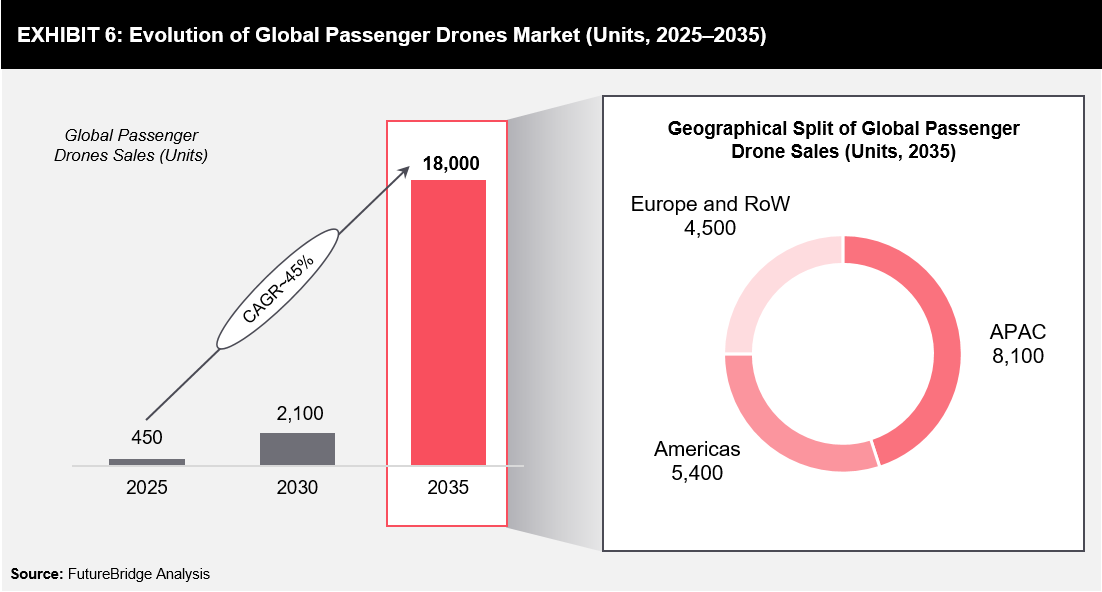 By 2035, Asia-Pacific is expected to capture 45% of the global passenger drone market, translating into 8,100 units of passenger drones. The region accounts for 19 (population of more than 10 million) of the total 33 global megacities. China and India collaboratively have 10 megacities. The Americas and Europe & RoW, capture 30% and 25% of the market share, respectively. 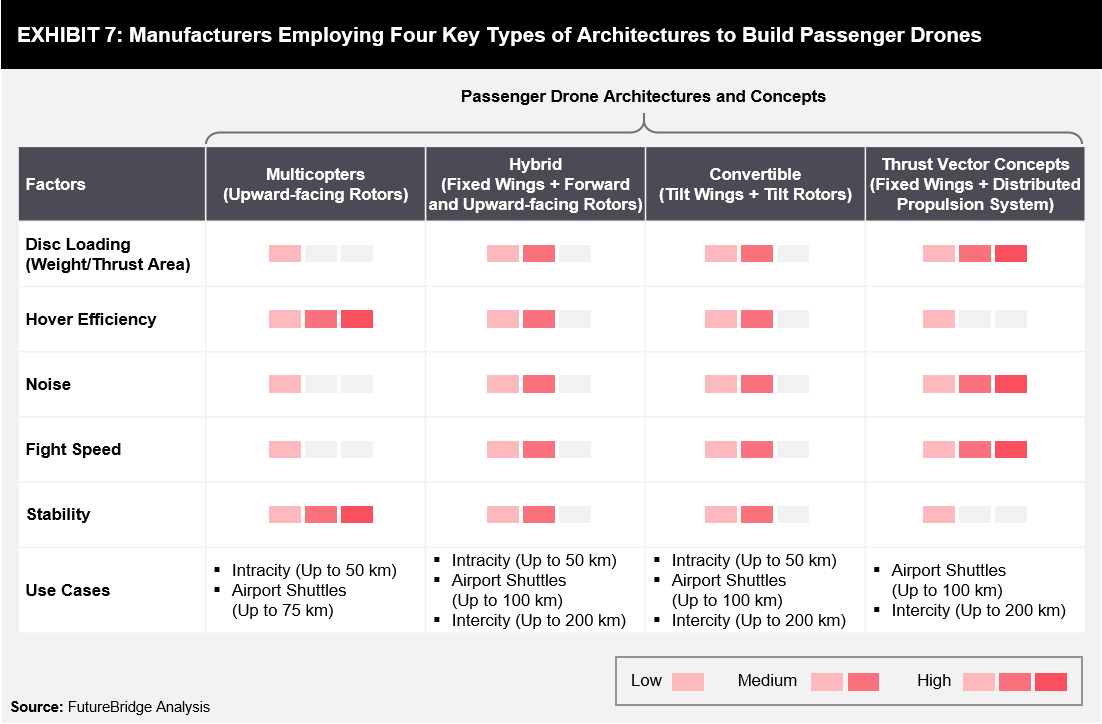 Drone fleet operators would be responsible for receiving an on-demand request for VTOL transportation and dispatching the drone to the customer. The cost of the drone would be very high in the first 10 years (2025-35), as economies of scale would not be considered. Hence, all drones during this period, would be owned solely by fleet operators and not by drivers (or pilots). Fleet owners would be responsible for buying or renting drones, employing certified pilots, offering regular maintenance of drones, and generating a continuous flow of customers through online booking applications.

Uber has already announced its intent to enter into the passenger drones market as a fleet operator. The company’s flying car project, Elevate, aims to launch a VTOL taxi by 2020.

The road to commercialization for passenger drones is not easier, as a collaboration among manufacturers, fleet operators, infrastructure providers, and regulatory authorities is need of the hour. In such cases, consortiums such as Urban Air Mobility (UAM) backed by the EU commission would play an important role in bringing regulatory authorities, private players, and consumers on the same page.