Automotive and the Software Market – The Next Business

The automotive market has witnessed considerable changes over the last decade. Electrification and autonomous driving have become synonymous with OEMs’ future direction. However, in this decade, both these areas are already creating significant disruption in the traditional value chain, as no OEM can claim that they have been leaders in these areas (barring TESLA). The disruption that has taken place is in terms of numerous companies operating in the automotive value chain. For example, electrification is already making exhaust systems and engines (combustion) and their respective components obsolete. Further to this, numerous components that supported the core combustion systems of vehicles will no longer be needed, thereby impacting the business of component manufacturers.

Despite the disruption, automotive OEMs are still working on manufacturing and selling automobiles. The propulsion engine type used in automobiles is something that has changed, but nevertheless, it still remains the core product for an automotive OEM. Automotive majors have started entering new areas through acquisitions and partnerships. For example, General Motors acquired Cruise Automation, a start-up developing self-driving technology, for US$1 billion in 2016. Around the same time, component manufacturer, Delphi, announced that it would be providing the Singapore Land Transport Authority with a fleet of self-driving vehicles as well as software for a mobility-on-demand program.

Interestingly enough, there has also been a steady increase in customer service and the ergonomics of future vehicles. This has fueled automotive OEMs to look at new and innovative ways of attracting customers. The situation is no longer focused on the performance of the vehicle alone, but rather, involves passenger comfort. This initially started with the inclusion of infotainment systems, leading to connected vehicles. The next era is the integration of online payments through vehicles. This is all quite understandable considering that individuals spend quite a considerable amount of time in their vehicles.

Gradually, automotive OEMs have realized that there is a need to start becoming like a software company in order to stay relevant. Software companies have managed to make inroads into the automotive market by virtue of the services they provide. Automotive OEMs have been partnering with software companies for the development of their own products; however, the question that arises is what if an automotive OEM can provide software as a product offering as well? Automotive OEMs have realized the revenue mix of the future will be considerably different from what it is today. Hardware will no longer be the largest contributor to the revenue mix for an automotive OEM. Software companies are already in the ecosystem, and presently, there is an influx of payment and service companies also entering the market. MasterCard and VISA each have been eyeing the in-vehicle payments systems market. Moreover, content providers are also looking at what their offerings could be to passengers in a vehicle, especially in an autonomous driving scenario. 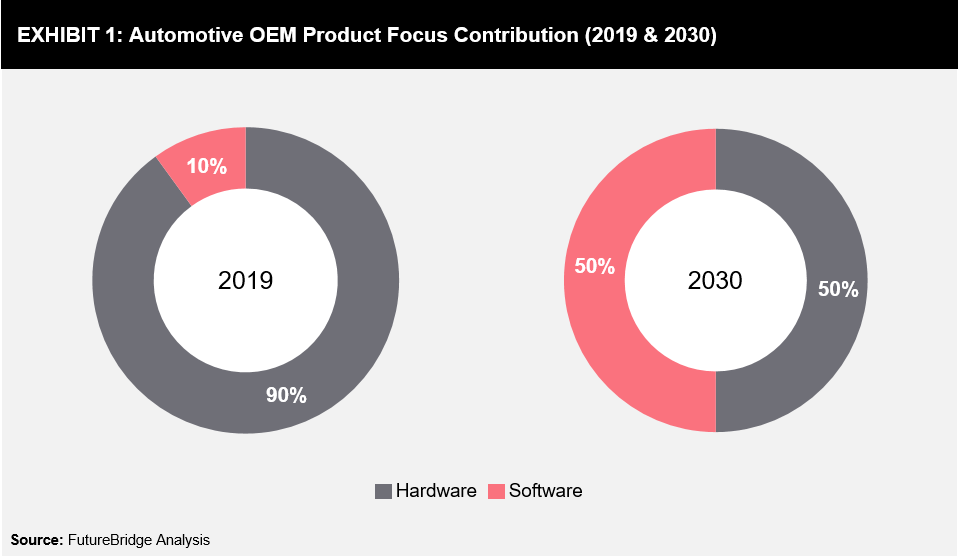 In 2019, most of the focus for an automotive OEM was on hardware (refer Exhibit 1); however, the split is expected to be almost the same by 2030 with an equal focus on both hardware and software. Automotive companies are already looking for the right set of tools that need to be in place, to no longer be recognized as just a hardware provider but as a leading software provider in the market.

The transformation of an automotive OEM from being a hardware vendor to being a software vendor will take place in stages. This can be the first key consideration that traditional players can enter into. This should ideally be an area where the software would play a pivotal role but at the same time, where the presence of an automotive OEM would add value to the overall proposition. Safety systems, dynamic control, energy management, etc., are just a few of the areas that would be automotive-centric.

Another area that an automotive OEM will need to consider is forging key partnerships and alliances. All indications are currently in the direction of a partnership to reduce the overall time-to-market, which would have been much longer had automotive OEMs performed tasks on their own.

However, there are some OEMs who are presently creating separate divisions dedicated to the software market. The Volkswagen Group is one such example where the company has been working on an expansion plan for its “Car.Software” organization. As part of its strategy, the company will be integrating various associates and subsidiaries to ensure that skilled professionals from the Volkswagen Passenger Cars, Audi, and Porsche are transferred to the “Car.Software” organization to ensure a more focused approach towards software development. This approach will also look at strategic acquisitions and partnerships to enhance capabilities in the field of software. It is expected that by 2025, there will be more than 10,000 digital experts in the “Car.Software” organization responsible for the development of software for digital ecosystems as well as customer-centric functions. The overall goal of the Volkswagen Group will be to position the company “Car.Software” as a separate entity and as the software brand of the group.

It can also be seen that numerous automotive OEMs are already gearing up for a software division/company in their hiring plans. A number of IT specialists are in high demand at present with a number of German automakers. Daimler had announced in early 2019 that the company would soon be known as a “software company.” This is becoming quite common nowadays and is also an indication that OEMs have recognized the need to start focusing on the digital aspect of vehicles, rather than relying on pure-play software companies that have enjoyed a monopoly in this area.

One of the biggest challenges for a company operating for decades in an industry is realizing that what was successful earlier may no longer be enough for continued future growth. This, fortunately, is not the issue that automotive OEMs are faced with. Many have realized the need to foray into unchartered waters, i.e., the software market for two reasons: to ensure that their dominance in the automotive market is not overtaken by software companies and to ensure that they are able to tap into the immensely vast business potential of the future. The only question over which there is two schools of thought is, building partnerships or capabilities in-house.

Partnering with pure-play software companies will allow OEMs to reduce their time-to-market. The experience and expertise of software companies can be imbibed in the automotive firm in a much shorter timeframe than to try and build the expertise from scratch. The only concern here is that the automotive firm would still be dependent on the software firm for future developments, and as such, the business potential for the automotive firm could reduce. No longer can an automotive company partner with a software firm for a short period of time and then bid adieu. If a partnership is to take place, it is necessary that the partnership is there for the long haul to succeed in the market.

It is for this reason that the other school of thought is to build expertise with what is already present in the company and to grow the same through hiring talent from across the market. This is something that the Volkswagen Group seems to be utilizing at present; however, the company has not ruled out any acquisitions or partnerships in the future, depending on the area of interest.

In any case, every automotive company has agreed that there has to be a change in terms of developing a new team or acquiring a new team. Automotive OEMs’ move into the software market does raise concerns for component suppliers that are already under pressure in terms of changing their product portfolio for the future. A solution for tier suppliers would be to foray into the digital market, but now, with the customer becoming strong in the software market, this reduces the value proposition which a tier supplier could bring. As such, partnerships with an OEM need not just happen with software firms, but with tier suppliers who may have already been working on capturing a greater share of the software market.

Automotive supplier wanted to understand current CO2 emission regulations and their impact on their existing and future product portfolio . . . The content is restricted to premium users only. Please sign...
READ MORE >
Mobility

Mobility major investigated current and future state of the Electric vehicle ecosystem in Europe with regards technology and market evolution . . . The content is restricted to premium users only. Please...
READ MORE >
Mobility