A Certain and Steady Market to Boost Green Hydrogen Economy

Hydrogen, the most frequently used term when there is a talk about sustainability and carbon-free world. The world is looking up to hydrogen or rather green hydrogen when it comes to limiting global warming to well below  2oC. It’s not as if hydrogen has not been used earlier, the world is already using 70 million tonnes of hydrogen annually, but it’s not carbon-free. Around 95% of the hydrogen produced today comes through fossil fuels, particularly through natural gas using the steam methane reforming process which releases carbon dioxide in the atmosphere. With the declining cost of renewables and electrolysis technology, the world is gearing up to accelerate the production of green hydrogen in the next 5 to 10 years. We could already see announcements of GW scale green hydrogen production plants in various European countries. But there is a lot of work that needs to be done by governments and industry players before green hydrogen can bring in a domino effect and help the world in achieving its target of being carbon neutral by 2050. One of the challenges at present facing the green hydrogen industry is instilling confidence among industry players and investors, who will be the flag bearers of green hydrogen in the coming future. These stakeholders are not sure of the avenues where green hydrogen will be used in the future i.e. industrial process, transportation, heating and cooling, electricity generation, or others. Since the green hydrogen value chain is still capital intensive, there is a requirement of off-takers which can guarantee the necessities of green hydrogen and reduce the risk for the stakeholders involved.

As per the study conducted by Hydrogen Council, heavy-duty and long-range transport vehicles will be one of the major users of green hydrogen in the coming years.  Considering, no major breakthroughs in battery technology, the green hydrogen is the most practical decarbonization alternative for vehicles requiring long-range capabilities. The high cost, heavyweight, and long charging times prohibit battery usage in such applications.

The scenario changes for small and short-range passenger vehicles like cars or short-range urban buses. The BEVs will remain the more preferred options in this segment in the coming years as the battery required is relatively small, and competitiveness will only increase with advances in BEV technologies.

The aviation sector uses standard jet fuel (kerosene) for flying aircraft, which translates to about 2.4% of global carbon emissions, or about 915 million tons, per year. Conversely, it is extremely difficult to replace kerosene with hydrogen, but synthetic kerosene from hydrogen can be used as a green alternative to fossil-fuel based kerosene. At present the cost of green hydrogen-based synfuel is USD 2 to 2.30 per litre, depending on the source of carbon whereas fossil fuel-based kerosene costs approximately USD 0.50 per litre. This price gap needs to be narrowed down for green hydrogen-based synfuel to be a success in the aviation sector.

The Maritime sector uses bunker fuels which results in 2.5% of global carbon emissions equivalent to 940 million tons per year. Hydrogen fuel cells offer an attractive alternative to carbon-emitting bunker fuels but need further technological advances and used test cases for the technology to become commercial in larger marine ships. LNG and liquid ammonia are the other alternate options for the International Maritime Organization (IMO) which has committed to reducing emissions by 50% or more by 2050.

Buildings consume more than a third of the total global energy demand and emit around a quarter of global carbon emissions. Hydrogen boilers and fuel cell CHPs can be two major technologies that can create inroads for hydrogen as a distant alternative to natural gas for heating and power applications in buildings. The ability of hydrogen to use the existing natural gas infrastructure (with little modifications and upgradations) can prove to be an attractive solution for providing low-carbon heating for residential buildings. There are already several projects underway in European countries like the UK to provide hydrogen for heating applications. Besides, if the cost of hydrogen boilers drops from USD 1600 per household to USD 900 per household, (expected by 2030, as per Hydrogen Council), the hydrogen-based heating will be on par with biomethane solutions and heat pumps for new buildings. Similarly, fuel cell CHP is expected to become a viable alternative to hydrogen boilers and heat pumps if the cost of green hydrogen comes down to USD 1.9 per kg.

In the industrial sector, green hydrogen can be competitive with natural gas (considering carbon price of USD 50 per ton of CO2) at a break-even cost of about USD 1.10 per kg. Such a low hydrogen production cost is difficult to achieve soon.  But green hydrogen is better off when compared to other low carbon solutions available including high-grade heat for industrial processes, peaking capacity for the electric grid, and remote power generation for regions with high fossil fuel prices and poor renewable resource availability. Green hydrogen can be a choice of decarbonization solution for medium and high-grade industrial heating (>100°C) in regions where other options like biomass and CCS are limited or not available.

Green hydrogen produced through renewables integrated electrolysis process can provide zero-carbon electricity to the grid as and when required. Currently, most of the flexible capacity comes mainly from fossil fuels and hydro resources. Green hydrogen will be the preferred choice in the upcoming years for avoiding renewable resources curtailment and powering the electric grid at will. 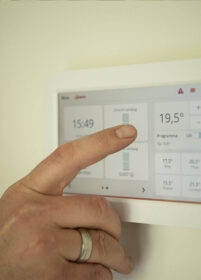