Home Self-Driving Vehicles – What is in Store for Auto Car Insurance?

Self-Driving Vehicles – What is in Store for Auto Car Insurance?

The vehicle insurance sector is slowly adopting new megatrends such as digitalization, IoT, and AI. The first commercial car was made by 1886. However, the first insurance regulations were passed by Massachusetts (US) in 1927. Till 1956, three states in the US, along with few European countries (such as UK, Ireland, and Germany), mandated vehicle insurance. (Refer Exhibit 1)

According to the US NHTSA, 94% of car crashes can be attributed to human error. Due to this, the liability of car crash and accidents are mainly on the car owners. In most parts of the world, it is mandatory to have vehicle insurance, and vehicle insurance is the responsibility of car owners. With the increasing adoption of self-driving vehicles, this responsibility might shift towards other entities in the value chain, particularly towards OEMs.

Through this article, FutureBridge will try to answer the following questions related to the future of auto car insurance:

Currently, the majority of the new vehicles in the market are level 1 and level 2 autonomous cars (Refer Appendix for the definitions of levels of autonomous cars) with limited driver assistance capability (Refer Exhibit 2). Most of the low-range and mid-range cars in the developing countries are fully manual-operated. Due to this, the liability of vehicle insurance is still on vehicle owners. 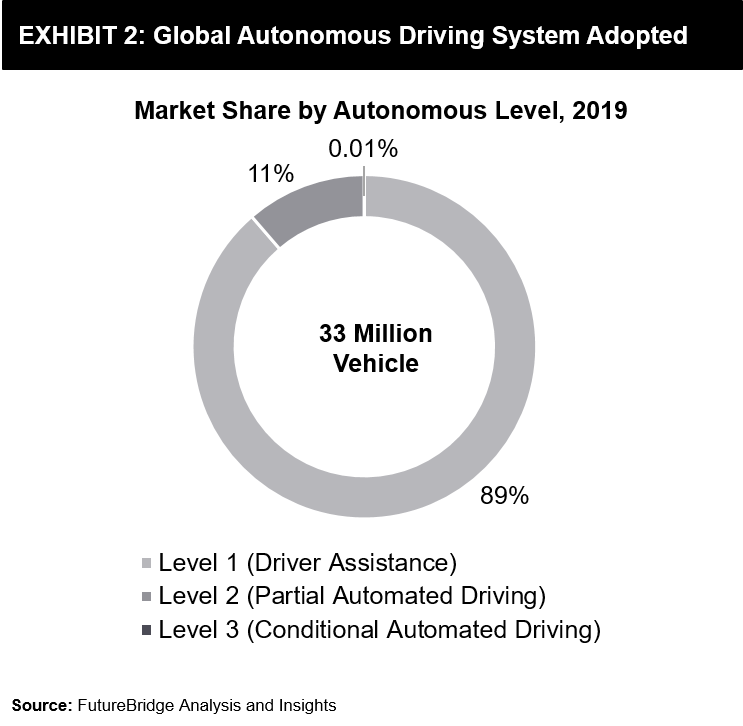 Current generation cars come with many sensors to monitor the driver’s health and behavior, using technologies such as big data, IoT, and artificial intelligence. Insurance companies have also started utilizing these data points (in collaboration with technology providing companies – such as AI, telematics, and mobile application providers) to offer cost-effective insurance policies for partially self-driving cars.

Usage-based car insurance can be categorized into three different models:

The penetration of smart-phones and online payment options have opened up new modes of product and service utilization. As costs associated with owing cars in metro and urban areas are high due to this, people are preferring ride-sharing and renting options over buying a car. To latch on this trend, technology companies are offering flexible insurance options (short term insurance plan) for drivers in countries where driver insurance is mandatory through mobile applications (Refer Exhibit 3).

The pay-as-you-drive insurance model was first introduced in Australia in 2008, and few countries have adopted it since then. The insurance coverage provided to the driver depends entirely on the distance traveled by the vehicle. The data is gathered from the reading of the odometer of the vehicle or independent GPS tracking device.

However, in many countries, the insurance lobbies opposed the pay-as-you-drive insurance model, and hence this model is not widely adopted. (Refer Exhibit 4)

The ‘pay-how-you-drive’ system is an extension of the ‘pay-as-you-drive’ model in which additional data like time of the day, driving actions, the time taken to cover the distance and the historic risk factor of the road. These data points are captured with the help of numerous sensors (telematics devices, das cameras, etc.) from the vehicle. However, these insurance policies are under scrutiny for privacy-related issues. (Refer Exhibit 5)

Liability insurance is mandatory in most countries around the world. Through this insurance car owner and driver cover damages for injuries and property damage to others for which you become legally responsible resulting from a covered accident.

Comprehensive car insurance offers additional protection over ‘liability coverage,’ which includes theft, fire, hail, and vandalism. In most countries, ‘comprehensive coverage’ are optional, but the premium cost is relatively high.

Vehicle insurance providers offer a wide range of insurance policies to cover up for the additional cost incurred during any mishap.

The insurance industry is at the crossroads of technology evolution for the automotive sector. Currently, the majority of the driver-assistance vehicles are level 1 and 2 categories with limited autonomy; there are few level 3 cars, including Audi A8 and Tesla. However, due to the lack of regulations related to autonomous driving, these cars cannot utilize their level 3 autonomous capability and are covered under conventional insurance policies.

The majority of the level 4 and 5 autonomous vehicles are under the testing phase, and by 2025 only 3% of the vehicles might have level 4 and 5 autonomy. So, the automotive insurance sector can expect new regulations for self-driving cars in the next two to three years in developing economies such as the US, the UK, the EU, and Canada.

Liability will shift from users to automotive OEMs

Traditionally, the liability of car/vehicle accidents falls upon the human driver, who needs to bear the cost of an insurance premium and additional damages. Introduction of autonomous cars is expected to change this gradually in the next 10–20 years, OEMs and Advanced driver-assistance systems providers (ADAS) are likely to take 100% liability of a car crash (Refer Exhibit 7).

As the penetration of level 4 and 5 autonomous vehicles increases (~3% in 2025 expected), claims related to these vehicles will also rise. FutureBridge estimates that, in the next five years, out of all insurances sold in the market, around 10–20% will be bought by OEMs. And in the next ten years, this might go up to 60–70%.

Currently, autonomous vehicle manufacturers such as Tesla, Google, Volvo, and Mercedes-Benz have accepted the liability of a crash, where a vehicle’s self-driving system is at fault (Refer Exhibit 8). However, industry experts believe that, with a set of current rules and regulations, OEMs and ADAS providers will take months before settling the claim related to a car crash. The next ten years will be unsteady for autonomous vehicle manufacturers as the number of autonomous cars (Level 4 and 5) on the road might increase along with already existing level 1 and 2 autonomous cars, which will complicate the insurance claim settlement process. Insurance companies and technology providers (AI, telematics, and mobile application providers) can take this as an opportunity and try to integrate technologies such as telematics, GPS tracking, and mobile application in partially automated driving cars.

As the number of self-driving cars on the roads increases, there might be a significant decline in car accidents. There will be a transition time for the first 10–15 years when drivers and driverless cars mix on the road. Most of the cars from this period will have partial self-driving features such as lane change alerts, cruise control, and forward-collision prevention. That might reduce the number of car accidents.

New players in the market

In the future, other OEMs and technology providers independently or collaboration with insurance startups might offer insurance for their cars. 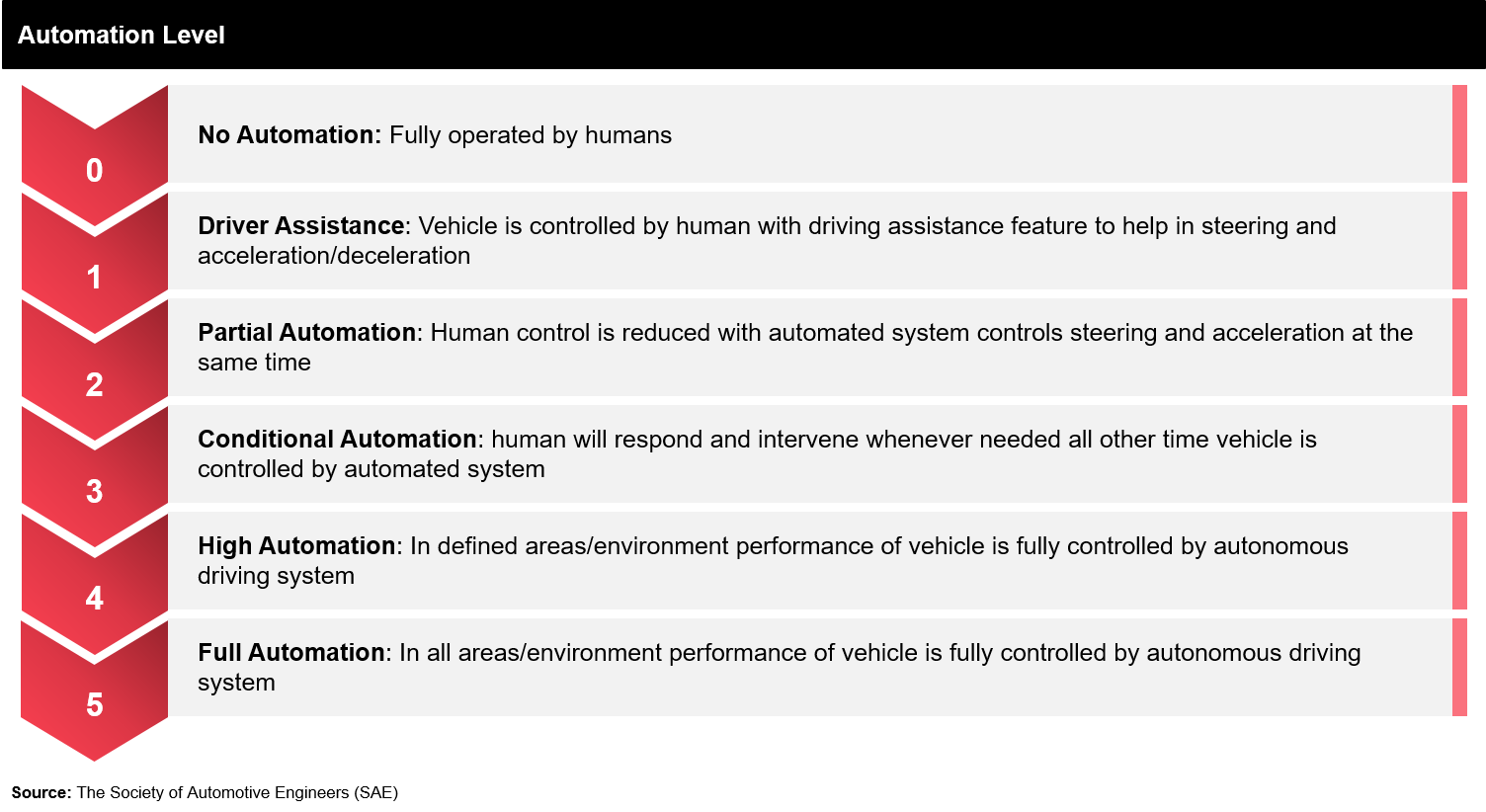