4D Printing – The Technology of the Future

The introduction of the fourth dimension to the 3D printing technology is termed as “4D Printing”. With this new dimension, 3D printed objects possess the capability to change its shape by itself over the influence of external stimuli, such as light, heat, electricity, magnetic field, etc. By integrating the dimension of time, printed objects change their shape dynamically based on the needs and demands of the situation, without any electromechanical parts or moving parts. This shape-changing phenomenon of 3D printed objects is based on the material’s ability to transform over time in response to specific stimuli, and it does not require human intervention to aid the process.

3D printing, an additive manufacturing technique, is considered as one of the most disruptive innovations in the field of modern manufacturing. It has completely transformed the way parts/components and equipment are manufactured in the industry, along with their design and development. 3D printing enables manufacturers and researchers to develop complex shapes and structures, which were earlier considered impossible with traditional fabrication methods. 3D printing technology has witnessed continuous advancements over the last 3 decades and has evolved drastically. Despite its ability to create complex, bio-inspired, multi-material designs, 3D printing is not yet ready to be adopted in large-scale manufacturing.

The increasing need for flexible objects in various applications, such as self-folding packaging, adaptive wind turbines, etc., has fueled the emergence of 4D printing. Researchers are currently looking ahead of conventional 3D printing, which fabricates structures from a single material, to develop a meta-material structure. The meta-material structure is generated by combining different materials that provide superimposed structural responses when activated by external stimuli. The congruent printing of different materials will form material anisotropy, which enables the object to change the structure by bending, elongating, twisting, and corrugating along its axes. Researchers are further working on expanding these structural changes to create lockers, lifters, microtubes, soft robots, toys, etc. This capability of objects to transform their structure over time by using the behavior of different materials is termed as 4D printing. 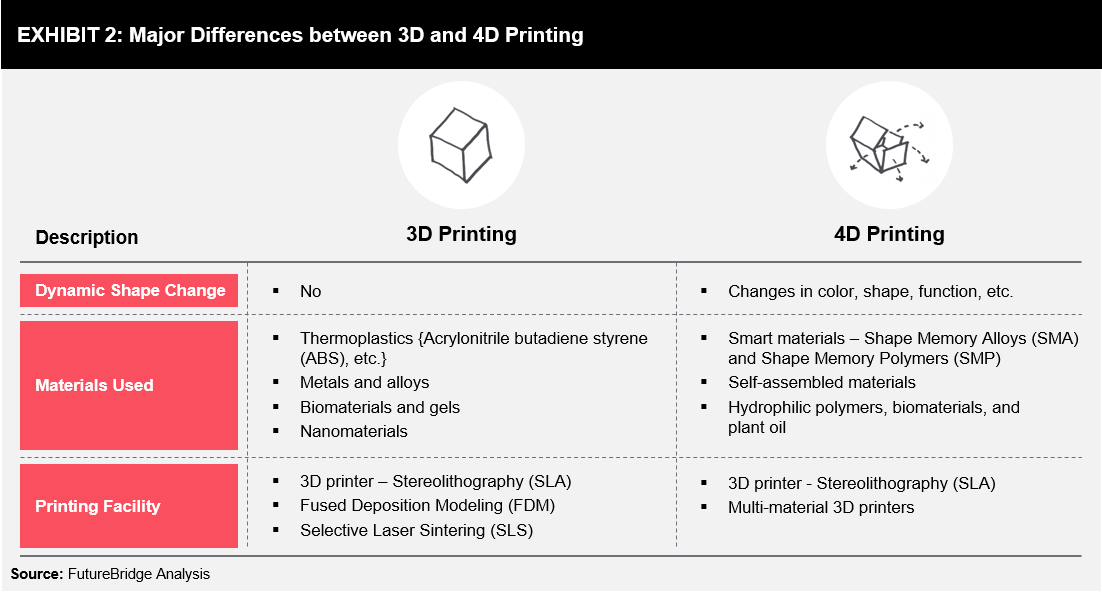 As the 4D printing technology is still in its nascent stage, materials used for it are minimal. However, research and advancement in 3D printing are expected to provide new opportunities for 4D printing. The primary research areas currently in focus with respect to 4D printing are depicted in the Exhibit 3 below. 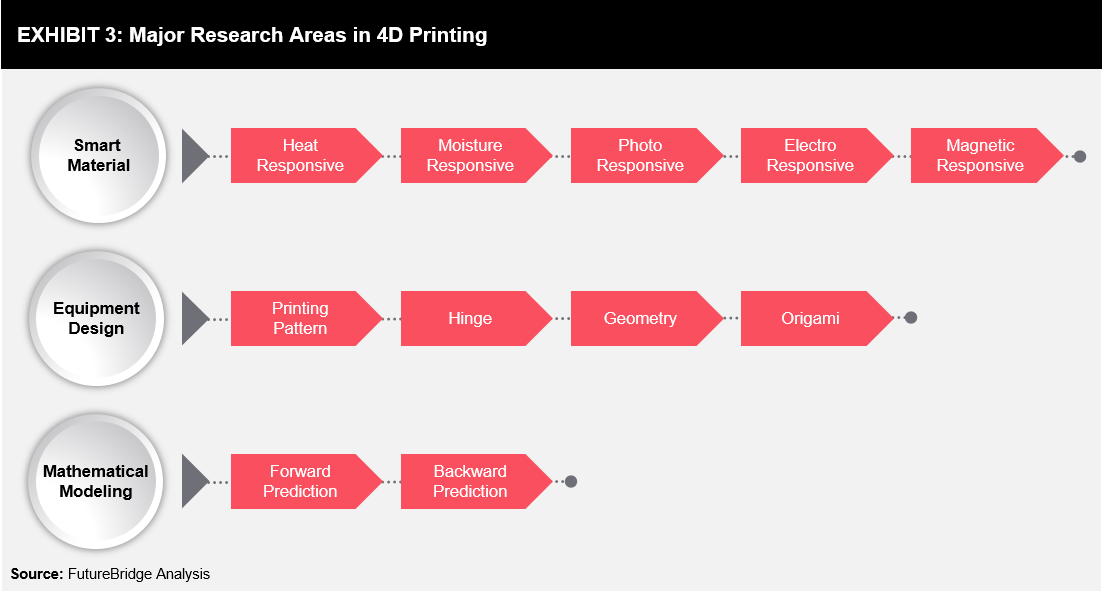 Smart Material is one of the highly focused research areas in 4D printing, wherein the deformation mechanism of various materials is synthesized as per their responses to various external stimuli. Equipment Design deals with developing advanced printer technology, which can print multiple materials congruently. Currently, researchers use direct inkjet cure, fused deposition modeling, stereolithography, laser-assisted bioprinting, and selective laser melting methods for 4D printing. Research on Mathematical Modeling is essential in understanding the functional structures of 4D printed objects. It predicts the deformation (forward) and formation (backward) process of an object triggered by stimuli.

Materials for 4D printing are classified based on their environment or the external stimuli they react with. Current classes of smart materials are currently classified into the below categories:

Materials that react when in contact with water or moisture are classified under this category. Such materials are widely preferred by researchers, as water is available in abundance, and it can be used in a wide range of applications. The hydrogel is one of the smart materials that fall under this category as it reacts vigorously with water. For instance, hydrogels can increase its size by up to 200% of its original volume, when it comes in contact with water.

These materials react with light, current, and magnetic fields. For instance, when photo responsive chromophores are infused with polymer gels at specific locations, they swell up absorbing light when exposed to natural light. Similarly, when current is applied to an object containing ethanol, it evaporates, thereby increasing its volume and expanding the overall matrix. Magnetic nanoparticles are embedded into the printed object to gain magnetic control of the object. 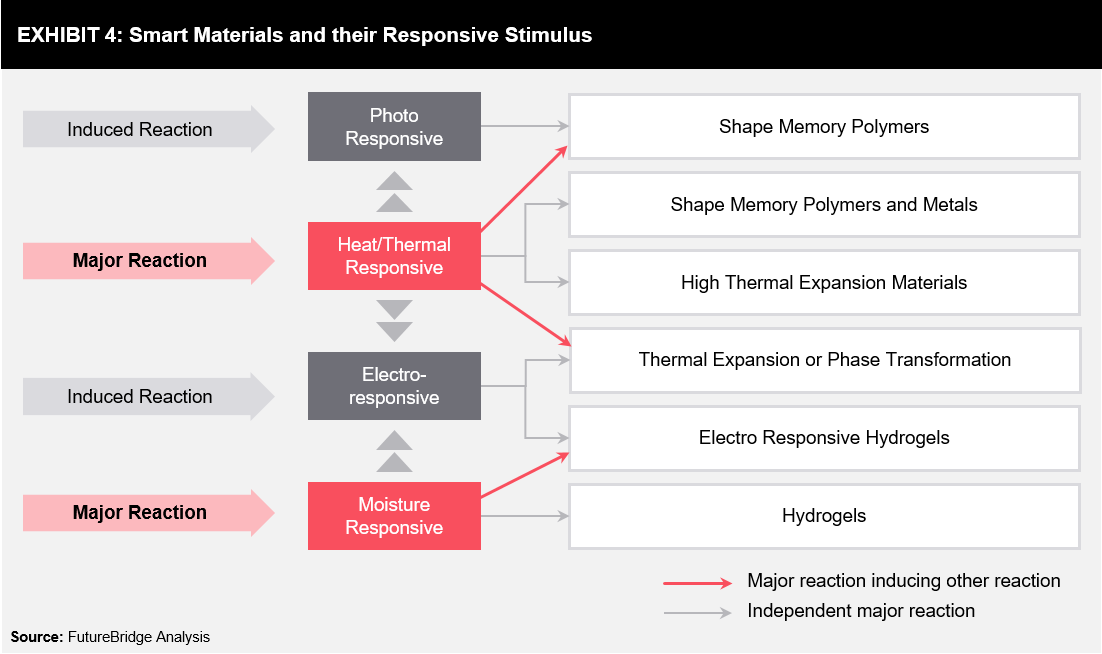 The idea of the pre-programmed intelligent object (created using smart materials) would seem to have several applications in various industries. However, being a novel technology, most of the applications are currently in the research & development phase. Major end-use applications of 4D printing technology are expected to arise from healthcare, automotive, aerospace, and consumer industries. However, the potential of 4D printing is expected to impact other industries as well, such as electronics, construction, industrial, etc., in the near future.

Some of the current researches in the field of 4D printing are depicted in the Exhibit 5 below. 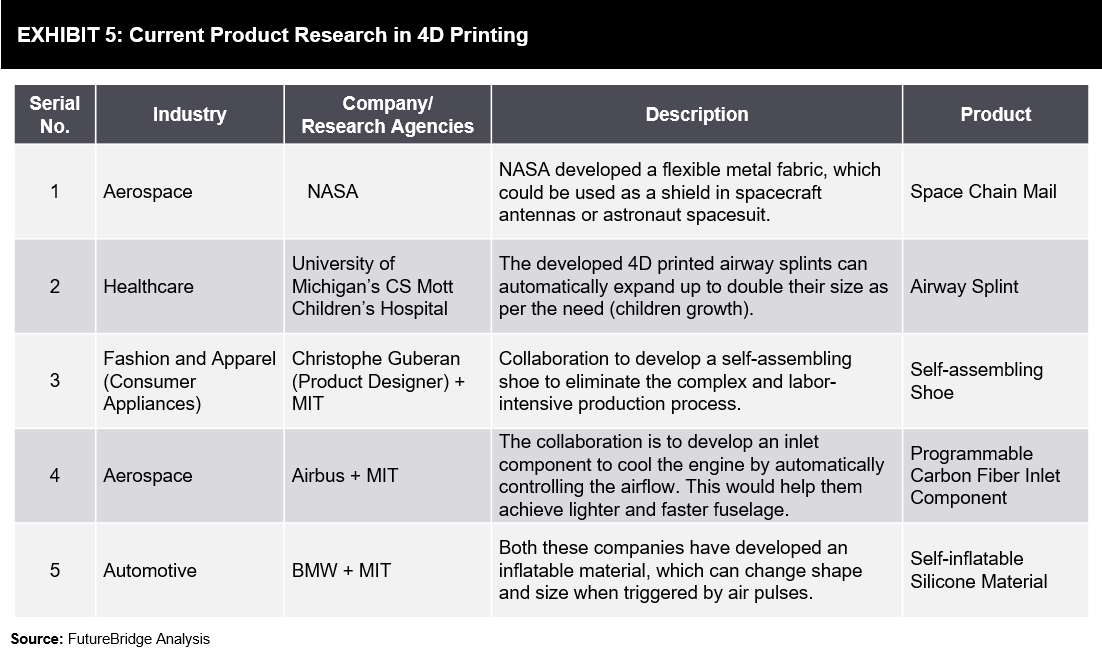 The self-inflatable material developed by BMW, in collaboration with MIT (as shown in the above table) has garnered the interest of several experts. The material, made of silicone inflates when triggered by air pulses, could be the future of pneumatics. Apart from the examples given above, there are several other research & development activities undertaken by key players in the 4D printing industry. For instance, some of the applications in the healthcare industry include ‘Targeted Drug Delivery,’ ‘Fabrication of Stents’ for minimal surgical invasion, Development of Shape Changing ‘Splints,’ etc. The development of ‘Soft Robotics’ and ‘Hydraulic and Pneumatic Actuators’ are some of the key applications in this industrial domain. The construction of self-healing roads and bridges could be potential applications in the construction industry.

The following Exhibit 6 below explains the possible impact timeline of 4D printing on various applications across industries.

The Exhibit 7 below showcases the current phase of technological developments in 4D printing. Being in the innovation trigger phase, the technology has certainly created a lot of hype; however, it will take more than 10 years to reach the plateau of productivity. 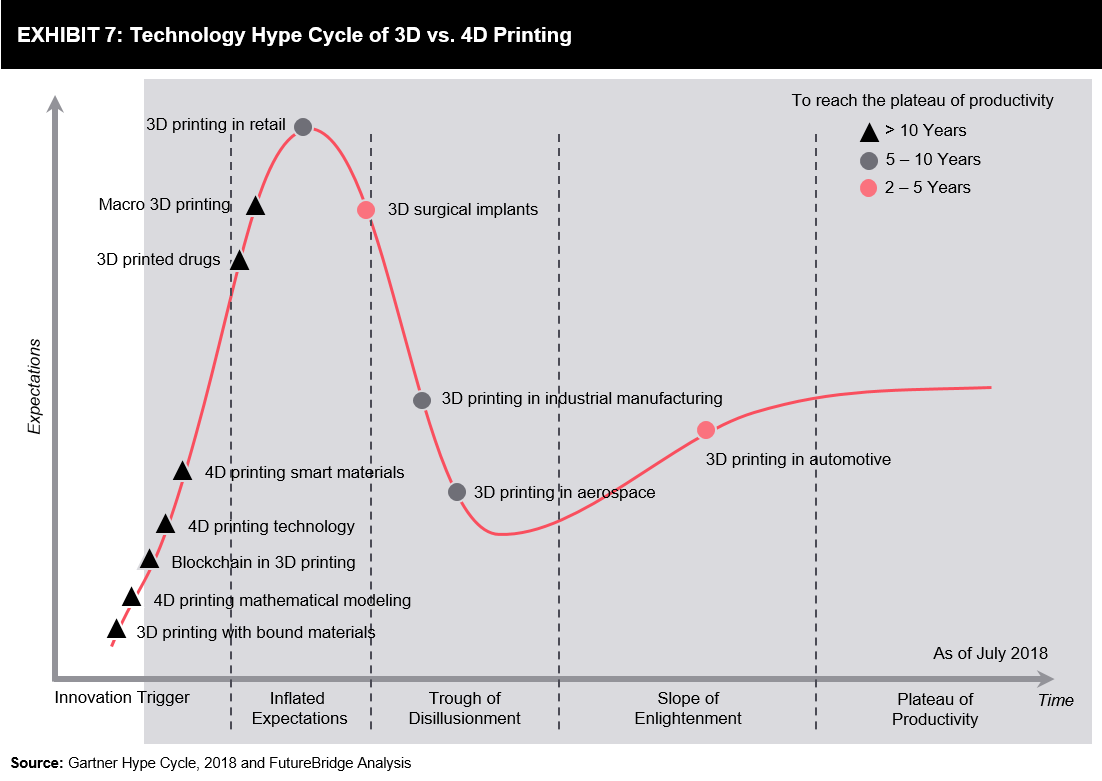 The hype cycle also pinpoints that several advancements in 3D printing are still in the innovation trigger and inflated expectations phases of the lifecycle. This implies that 3D printing has a long way to go, and 4D printing being the successor of 3D printing could be slow in its progress. However, it is not mandatory that advancements in 4D printing should always follow 3D printing. Apart from the capabilities of a 3D printer (its ability to print multiple materials congruently and to print on several axes), other research areas focusing on smart materials and mathematical modeling does not overtly depend on 3D printing.

Several research and development projects specific to 4D printing are underway in industries, such as healthcare, electronics, automotive, aerospace and defense, consumer appliances (fashion and consumer durables), textile, construction, and industrial machinery. Despite being a novel technology, potential opportunities presented by 4D printing are vast and are acknowledged by several experts in the field.

The market for 4D printing is beginning to establish, owing to numerous research and development activities. The opinion of market growth is varied among experts. The optimistic view of the technology suggests that the market would grow at a CAGR of approximately 33% (an estimated increase in market size from US$35 million in 2019 to US$200 million by 2025). However, being a novel technology in its infancy stages, FutureBridge predicts that the 4D printing market would grow at a slightly slower rate of 20% by 2025 (refer Exhibit 8).

Despite being a promising technology, 4D printing needs to overcome several technological hurdles prior to it been widely adopted. Some of the major challenges in the printing industry include lack of ability to provide support structures for complex objects, lack of multi-material printers, lack of low-cost printers and smart materials, slow print times, and the limited reliability of printed objects in the long run. Though there are certain advancements in printing technology, such as 5-axis printing equipment, which is expected to eliminate the problem of building support structures for complicated internal structures, other challenges still remain.

Furthermore, challenges such as slow and inaccurate actuation, lack of control over intermediary states of deformation, and limited material availability are other reasons for the delayed adoption of the 4D printing technology. However, considering the interest shown by manufacturers and the high-intensity level of research and development activities with respect to 4D printing, the technology could make an exponential jump at a faster pace than the predicted pace. Finally, manufacturers who want to be at the forefront of technological changes and advancements should be abreast with the technological advancements and potential implications of 4D printing.

Automotive supplier wanted to understand current CO2 emission regulations and their impact on their existing and future product portfolio . . . Access the full-content and exclusive insights by registering to futurebridge.com.
READ MORE >
Mobility

Mobility major investigated current and future state of the Electric vehicle ecosystem in Europe with regards technology and market evolution . . . Access the full-content and exclusive insights by registering to...
READ MORE >
Mobility