ICT and Financial Services are mature industries (Exhibit 1) in terms of AI usage for day-to-day activities. In ICT, companies are offering AI-based assistant for commercial applications (examples are Siri, Alexa, and Google Assistant). 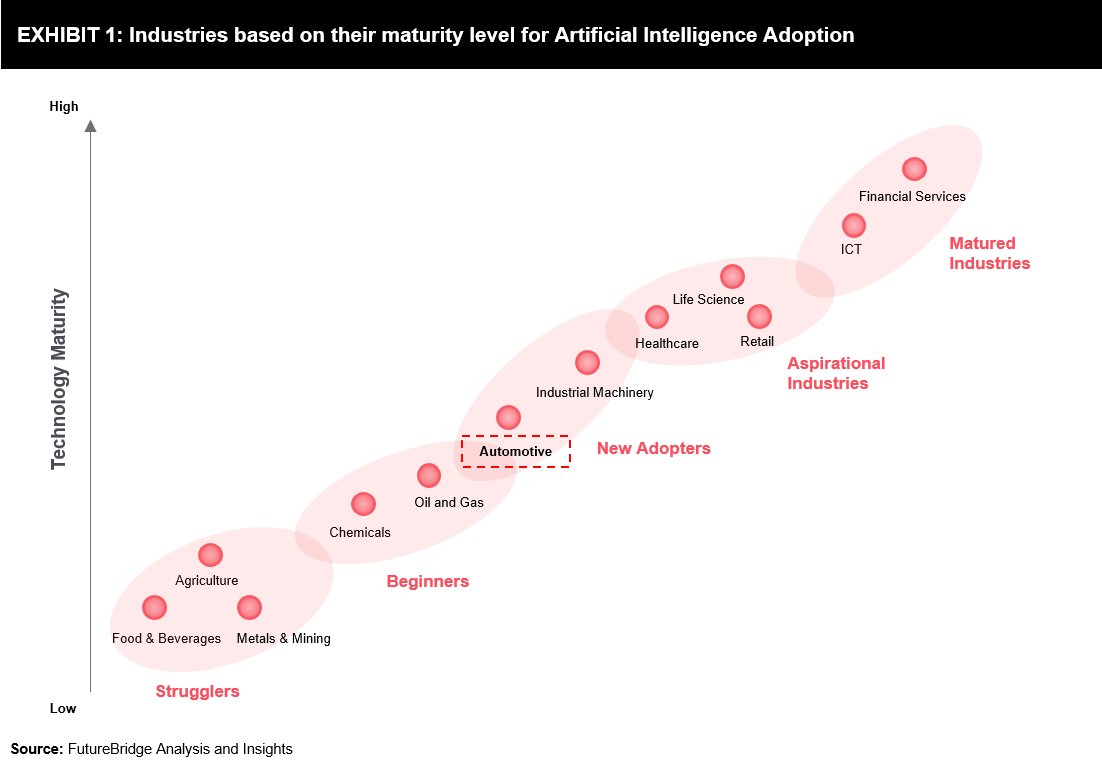 Role of Artificial Intelligence in the Automotive Value Chain

Artificial intelligence finds its applications across the automotive value chain (Exhibit 2). Currently, AI is being implemented in automotive manufacturing, including design, supply chain, production, and post-production. In addition, AI is being implemented in ‘driver assistance’ and ‘driver risk assessment’ systems, which is transforming the transportation sector. Aftermarket services such as predictive maintenance and insurance are also transforming through the usage of AI. 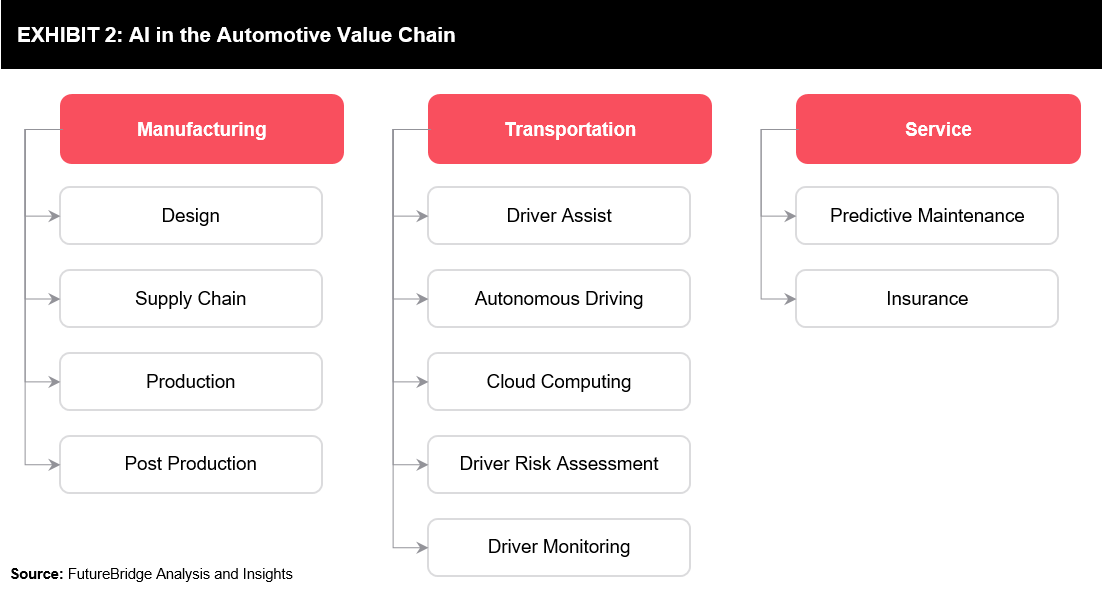 Robots are simultaneously working with human and learning automotive manufacturing skills (design, part manufacturing, and assembly) with the help of AI. Currently, AI helps humans to develop cars (Exhibits 3) using Exoskeletons; in the future, the entire plant can be operated by these AI-powered robots. 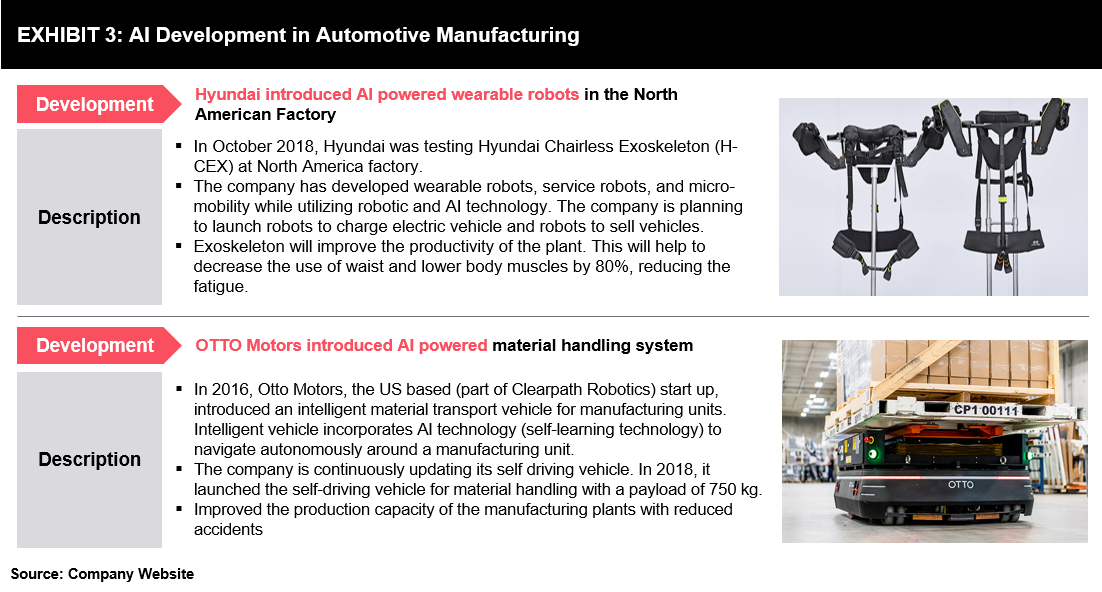 AI is revolutionizing the transportation sector (Exhibits 4 and 5). Currently, AI is playing a vital role in driver assistance technology, and it is being used widely in modern vehicles. Currently, Tesla is offering level 2 autonomous cars, and the company is planning to launch level 4/5 autonomous vehicles by the end of 2020. AI can be used to monitor the driver’s eye – whether one is sleeping/tired or not.

AI can play a significant role in aftermarket service (refer Exhibit 6). Currently, many AI applications predict the problems related to engine performance, battery performance, etc. that may occur in the future. In addition, there are many AI-powered insurance providers who offer quick services i.e., in availing insurance and claim settlements, to customers.

Within automotive, the implementation of artificial intelligence is at a very slow pace (refer Exhibit 7). In 2015, 5–10% of the vehicles had some or other form of AI system installed. In the last five years, AI is being deployed for parking assistance, cruise control, and level 1 and 2 autonomous vehicles, which has resulted in increased adoption of technology. In the next 8–10 years, AI technology is expected to be part of many automotive applications. Hence, by the end of 2030, it can be expected that 95–98% of the new vehicles may have AI technology.

With AI making inroads in the automotive industry, there are some key aspects to look at. While some emerging trends like fully autonomous vehicles are expected to become a reality in the future, there may be new revenue streams and opportunities for OEMs as well as other entities (like technology providers) in the value chain. 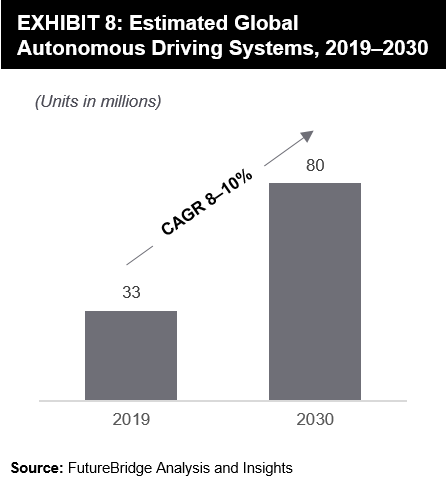 In 2019, ~89% (refer Exhibit 9) of the autonomous vehicles sold were level 1 (see appendix for definition), and ~11% were level 2. Currently, the application/adoption of AI in an autonomous vehicle is in a nascent stage and mainly used in parking assistance and partially automated driving applications. Very few vehicles (~0.01%) are level 3. However, in the next ten years, AI technology in the automotive industry is expected to reach maturity, and level 3 vehicles are expected to account for the majority of the market share, followed by level 2 and level 4/5 vehicles. 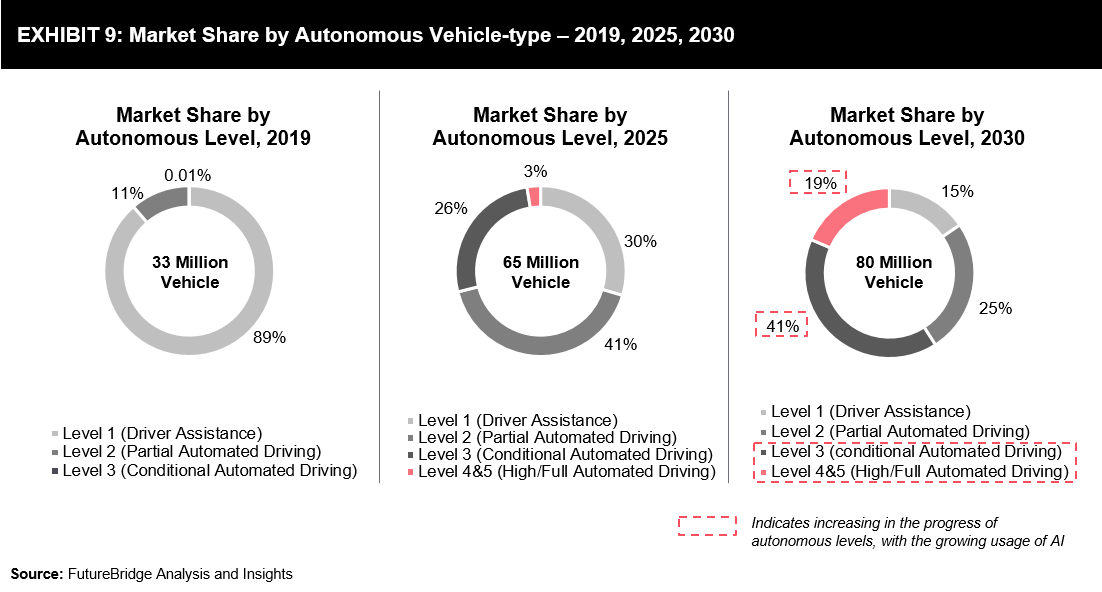 AI is the backbone of self-driving cars and connected cars. According to market estimation, by the end of 2030, around 85% of the vehicles will be (to some degree) autonomous cars. However, currently, very few countries have supporting infrastructure (such as roads and regulations & standards) for autonomous driving. By 2025, most of the developed countries (such as the US, Canada, Germany, UK, China, and Japan) around the world will have improved infrastructure for autonomous vehicles. By the end of 2030, level 3 autonomous vehicles will be more common; in addition, level 4 and level 5 will also pick up. 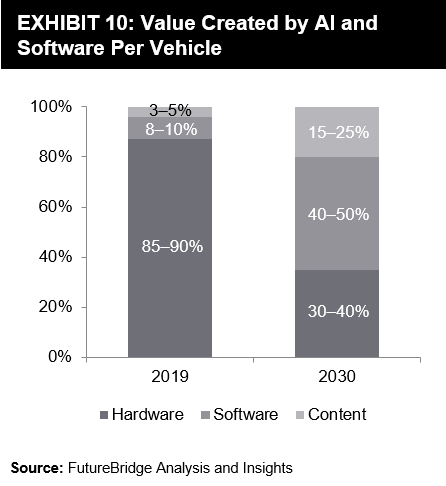 Traditionally, car manufacturing was dominated by internal combustion engine manufacturers and supported by part manufacturers, technology providers, etc. Multiple market forces, such as the rise of EV vehicles and strength of data connectivity, have opened doors to new players in the automotive industry.

Currently, the vehicle brand is known by its engine maker. However, in the next ten years, the vehicle is expected to be known by its software (which includes autonomous driving technology supported by AI, advanced infotainment system, etc.) provider. Companies such as Google, Baidu, Amazon, and Uber— who are technology providers—are launching autonomous vehicles (Exhibit 11). Here vehicle body, chassis, and battery providers are acting as part suppliers. 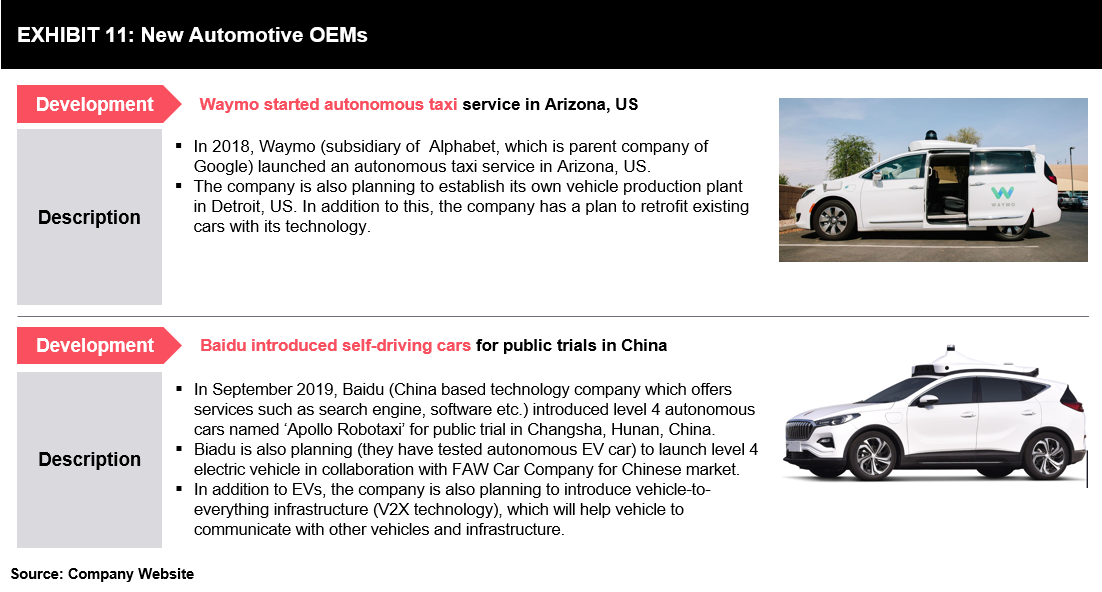 Currently, automotive OEMs are lagging in the implementation of AI technology in its vehicles (when compared with technology providers). The OEMs have gauged the future of automotive, and they have initiated collaborations with technology companies to develop autonomous vehicles. For instance,

In the future, it is expected that more collaborations/partnerships and acquisitions can be seen across the automotive industry, where OEMs, to stay competitive, will involve technology providers and other entities in the value chain. This will be mainly done to prevent new players/entities from taking an early advantage. AI is revolutionizing the mobility sector with autonomous cars, advanced infotainment systems, and driver risk assessment. Conventional OEMs have to think ways to maximize their revenue share in the future automotive market. Currently, technology companies are at the forefront, leveraging their AI experience (from matured sectors like ICT) to capture the autonomous vehicle market. 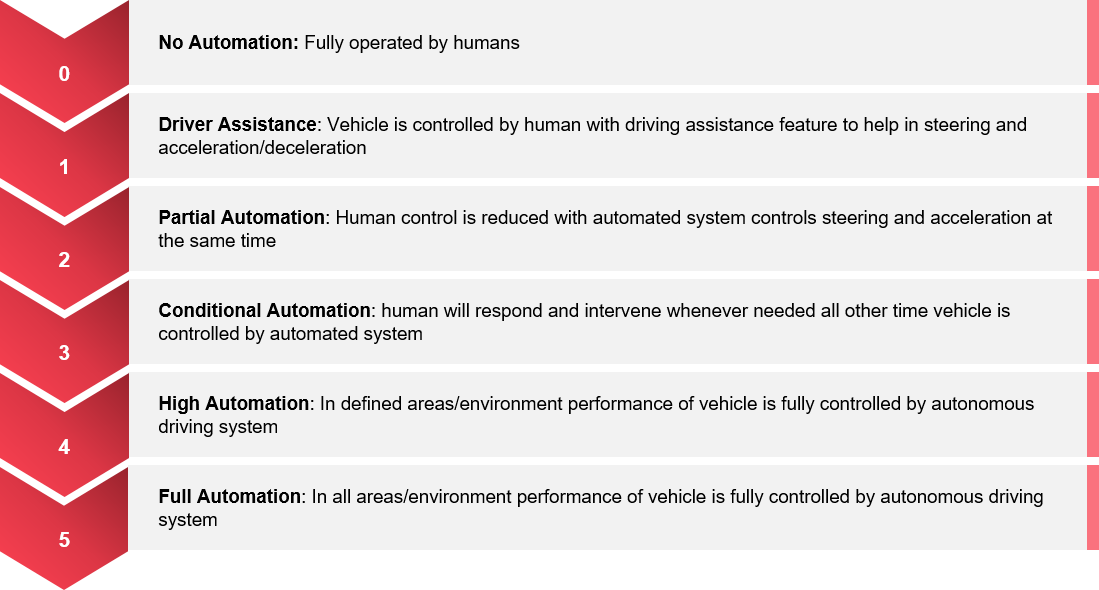