Technologies for ramping down CO2 emissions already exist and these include swapping fossil fuels for renewable sources, boosting production & energy efficiency, implementing Carbon Capture and Storage (CCS), and discouraging carbon emissions by putting a price on them. Over the last three decades, several CO2 capture technologies have been developed and implemented at an industrial level due to their acceptance by corporates, high success rate, and increased awareness regarding the importance of reducing carbon emissions. However, CCS technologies have limited capacity in terms of CO2 emissions, and fossil fuels are still predicted to be the primary source of energy. Hence, the chemical/fuel conversion & utilization of CO2 is a key element for sustainable development towards achieving a low-carbon economy. The application of CO2 as a chemical & fuel feedstock allows dealing with the emission problem in a more effective way by recycling of CO2 into value-added products, such as polymers, monomers, synthetic fuels, etc. In addition, the application of CO2 conversion & utilization technologies may change the image of CO2, by proving that it is a valuable chemical and an important source of carbon with almost zero cost of production.

In this article, FutureBridge highlights current trends in CCU around the chemicals & fuels sector.

What Does CCU Technologies Have to Do With the Captured CO2?

Although, when fossil inputs as feedstock with a large carbon footprint are substituted with CO2, the indirect‐emission reduction can even outweigh the direct‐emission reduction; for example, polyols production, wherein epoxides are partially substituted with CO2 (40-50%). Owing to the substitution of fossil resources and enhancement in production and energy efficiencies, CCU represents a concrete concept for climate change mitigation. Hence, this double functionality makes CCU an important decarbonization concept for highly industrialized geographies with the availability of abundant emission sources and existing chemicals/intermediates and materials production.

At present, novel CCU concepts, besides the existing urea production, enhanced oil recovery, chemicals/intermediates such as formic acid, polyols, etc., and fuels production such as methanol, remain at an early stage of development.

How are Products & Markets Evolving in CCU for Chemicals & Fuels?

CCU technologies could be categorized into three main pathways: a) Mineral carbonation to produce construction materials (mineral carbonates), which could be used to make concrete and cement, b) Chemical conversion to produce chemicals & fuels, and c) Biological conversion to produce chemicals and fuels. Undoubtedly, momentum around CCU surged after the commercialization of polycarbonate (Wonderlite) by Asahi Kasei Corporation in 2002; it was the first company worldwide  that developed a manufacturing process using CO2 as a raw material. The manufacturing process of Wonderlite does not require phosgene and methylene chloride (highly toxic), both of which are used in the conventional production process of polycarbonate. Asahi Kasei licensed CCU technology to six companies (one among them being Chimei-Asahi Corp.), with a total polycarbonate production capacity of 1.07 million metric tons per annum by 2019, i.e., 0.185 million metric tons of CO2 per annum can be fixed in the products. In 2014, Novomer commercialized the Converge technology that converts CO2 into high-value end-products, such as polyols, which are used in polyurethane formulations. In 2016, Saudi Aramco acquired Novomer’s intellectual property and associated products through its subsidiary, Aramco Performance Materials LLC. In 2016, Covestro installed a manufacturing unit of polyol with a production capacity of 5000 metric tons per year, wherein polyols are produced by copolymerization of CO2 (~20%) with propylene oxide to generate polymeric polyols (polyether carbonates and cardyon), which are used to make polyurethanes, found in foam mattresses. It should be noted that the current production capacities of both converge and cardyon products are ~60 times smaller than conventional polyol production capacities. It will be interesting to see whether these CCU technologies will eventually replace the existing and conventional plants. 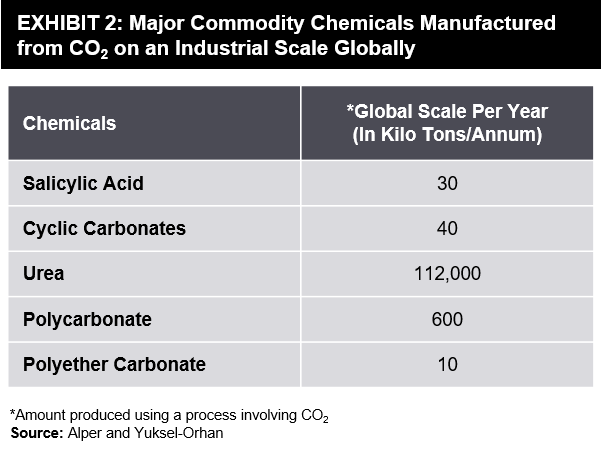 Typically, methanol is produced from syngas (H2 + CO) that is directly obtained from fossil fuels, and a small amount of CO2 (up to 30%) is generally added to the feed to improve performance. It involves the initial conversion of CO and H2O to CO2 and H2 through the water gas shift reaction. In fact, the development of manufacturing methods to increase the amount of CO2 in the syngas feed without decreasing the methanol yield represents an opportunity to utilize waste CO2 that is produced during syngas production.

Carbon Recycling International (CRI) was the first company that produced liquid fuel at an industrial scale from CO2 in 2011. Currently, CRI produces ~4,000 tons of methanol from CO2 each year, which translates into the utilization and conversion of 5.5 tons of CO2 emissions. The manufacturing unit uses hydro and geothermal energy to produce hydrogen, along with CO2 that is captured from the flue gas of a geothermal power plant.

Research communities and corporates have been aware of the potential economic, social, and environmental benefits of using CO2 as a feedstock for the synthesis of commodity/fine chemicals and fuels for decades. Although extensive fundamental research has been performed around CCU, the conversion of CO2 into more valuable chemical and fuel products is limited in terms of industrial viability. Challenges associated with CCU are primarily related to both kinetic and thermodynamic stability, as CO2 cannot be converted into chemicals or fuels without significant inputs of energy that contains strong bonds, which are not particularly reactive. Thus, many of the available transformations of CO2 require stoichiometric amounts of energy-intensive reagents, which can often generate significant quantities of waste and can result in large carbon footprints. Start-ups and established companies are working to make CCU both viable and profitable to overcome or mitigate the technical challenges associated with CCU. There are new CCU technologies such as electrochemical, catalytic, biological, mineralization, photocatalytic, and photosynthetic processes at various stages of development and commercialization, which encompass the potential to provide opportunities for emission savings, increased efficiency, and revenue generation through producing marketable products. Several start-ups are trying to use captured CO2 to produce valuable and marketable chemical and fuel products. Listed below are some of the key start-ups in this space.

Globally, CCU is capturing the attention of governments, policymakers, technology developers, industries, and the investment community. Key drivers for CCU are increased interest in climate change mitigation, development of sustainable & economical products, and circular economy. The market for CO2 use in chemicals and fuels are expected to remain relatively small in the next 1-2 years but will catch up momentum in the medium term (3–5 years). Public procurement and positive perceptions of CCU products such as foam, mattresses, etc., can help create a new market for CO2-derived products.

It is difficult to assess the future market potential for CO2-derived products for the chemicals & fuels sector, although, it could grow to scales of voluminous market. Major concerns associated with CCU are the quantity of CO2 utilized is small as compared to the amount of CO2 being emitted, and the energy required to transform CO2 into commercial products significantly reduces the net benefit.