The Net Energy Metering (NEM) mechanism allows residential and commercial customers to generate their own electricity from rooftop solar PVs and to feed the excess electricity back into the grid and use it later in the day, as explained in the Exhibit 1. This mechanism has enabled faster adoption of rooftop solar PVs in both residential and C&I segments. It has played a crucial role in the financial viability of small-scale solar PV projects. As the net electricity bill of consumers drastically reduces, savings are enhanced and the payback period is shortened. 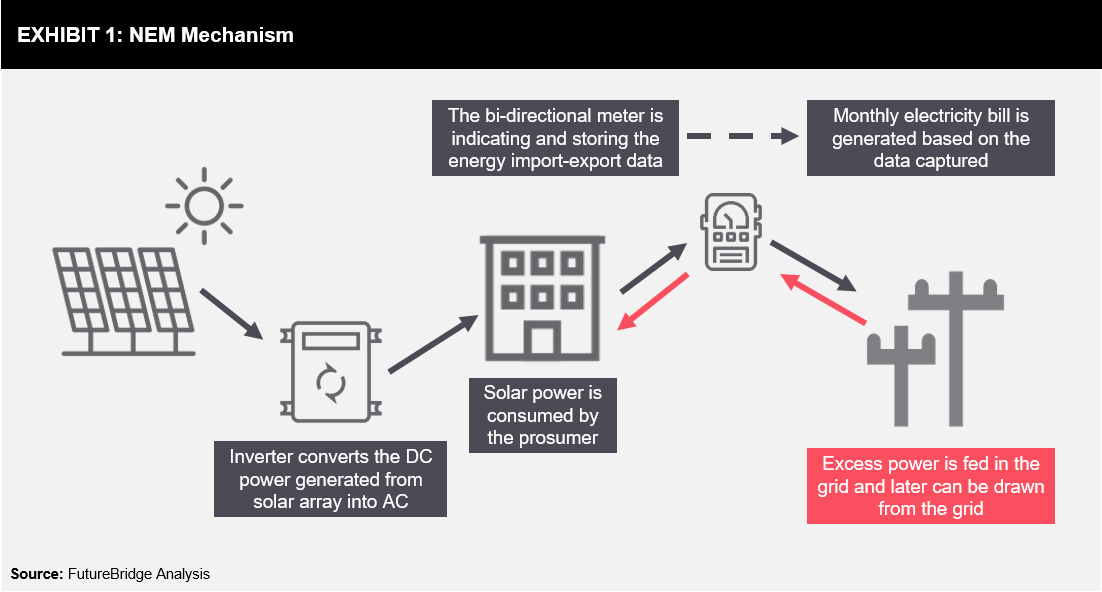 NEM mechanism was first introduced in Minnesota, the US, in 1983. Since then, the development and adoption of NEM policies have been extensive. Initially, the NEM mechanism was introduced to promote the rapid adoption of the rooftop solar PV and incentivize against the higher cost associated with the solar PV system, which eventually has declined over the years. The present market condition advocates the self-sufficiency of the solar PV segment, that is, to stand on its own with limited financial incentives leading to the restructuring of the NEM mechanism.

Declining solar PV system cost, technology maturity and widespread know-how, favorable market condition, and initiatives undertaken by the federal government have raised concerns regarding the present structuring of the NEM mechanism. Distribution utilities have been concerned about the impact of rooftop solar on their business models, and hence, they are driving the transition in the NEM mechanism. Major concerns revolve around how customers are reimbursed for feeding power back to the grid. Presently, for each unit fed into the grid, the retail price is paid and is adjusted through net energy bills, which ultimately makes the project economics more attractive.

By the end of 2019, NEM policies existed in 68 countries (refer Exhibit 2) at the national or the subnational level. These policies are applied at the country/state level and are associated with other incentive mechanisms to promote rooftop solar adoption. In the recent past, the NEM mechanism was introduced in Malaysia, Indonesia, Peru, and Argentina. At the same time, in the US, Vietnam, and India, stakeholders were considering the NEM policy restructuring. 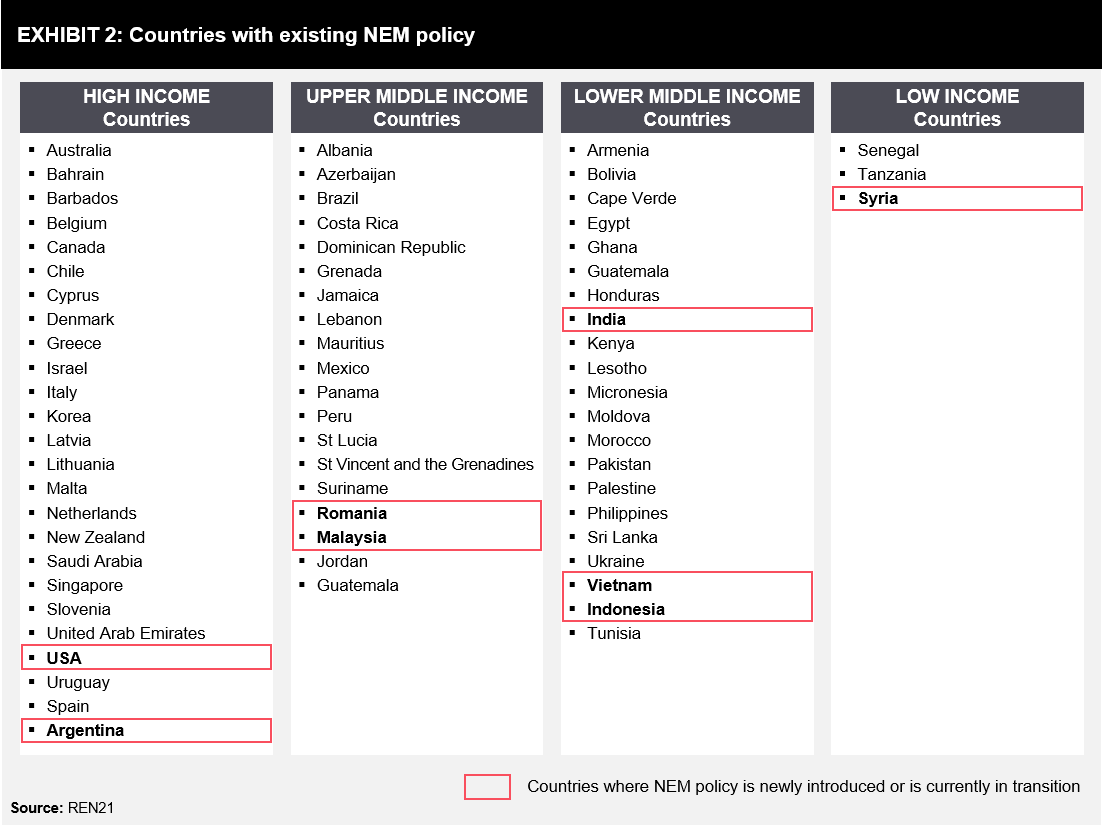 Globally, the rooftop solar PV market has grown rapidly and is established in countries, such as the US, Australia, Italy, India, and the Netherlands, with the support of the NEM mechanism.

In recent years in the US, multiple states have replaced or restructured the NEM mechanism. Although this country has been the largest market for small-scale solar PVs, it has witnessed a tremendous impact on the NEM mechanism, along with other federal and state incentives. Lawmakers and regulators, in response to the rising penetration of rooftop solar PVs, have started questioning the way customers will be reimbursed for feeding power back to the grid in the near future.

For reference, in September 2019, regulators in Louisiana replaced NEM with compensation at avoided-cost tariff for the power exported to the grid on an instantaneous basis, which has come into effect from January 1, 2020. Earlier, in 2018, regulators in Michigan replaced the NEM Program with avoided-cost tariff; moreover, in 2015, Hawaii ended the NEM policy. Other states where net metering has been phased out are Connecticut, Indiana, Kentucky, and New Hampshire. Various states considering changes in NEM policy, rate design, and ownership policy in 2019 are depicted in Exhibit 3. 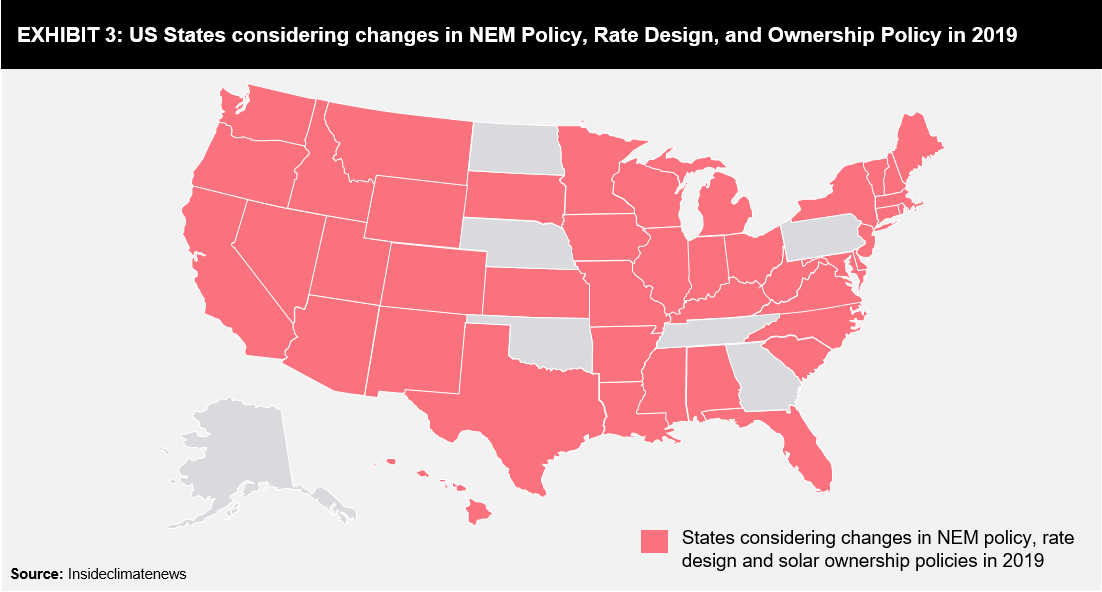 In November 2019, stakeholders in India initiated discussions on amending the NEM mechanism. Discussions were with regards to the adoption of gross metering and rollback of NEM from all segments, except the residential segment.

The above-mentioned amendments in NEM policy have created uncertainty in both the US and Indian markets, which have resulted in the sense of instability in the minds of project developers as well as consumers. Therefore, it has become necessary to analyze the implementation of NEM policy on similar lines in other countries worldwide.

On the contrary, in countries such as Malaysia, Indonesia, Peru, and Argentina, where rooftop solar PV installations are few, the NEM mechanism has been introduced recently. This mechanism still needs to be developed to offer stable conditions and transparency to increase investment flows and ensure the rapid adoption of rooftop solar PVs.

Considering the market uncertainty generated after the removal or alteration of the NEM policy discussed above, a critical question that arises is whether to implement NEM policy on similar lines as the US and India or to consider innovative alternatives for budding markets. In China, Germany, and Japan, the rooftop solar PV market has developed at a faster rate with a Feed-in-Tariff (FiT) incentive mechanism.

Alternative of NEM for Developing Market

CASE 1: In Vietnam, the net metering is being replaced by the direct consumption/supply method. The government of Vietnam has recently released the third draft of its mechanism for encouraging the development of solar power, including solar rooftops applicable from July 1, 2019. The draft defines four models of rooftop solar systems:

CASE 2: Michigan and Louisiana are adopting the avoided-cost tariff model to pay for power fed into the grid. Avoided cost is defined as the cost to the utilities; it is a benchmark price for energy services used to compare resource alternatives. Avoided cost is the marginal long-term or short-term production cost that could be avoided by an alternative supply-side or demand-side resource. In several states in the US, avoided cost rates have been used as the power purchase price offered to independent suppliers (co-generators). 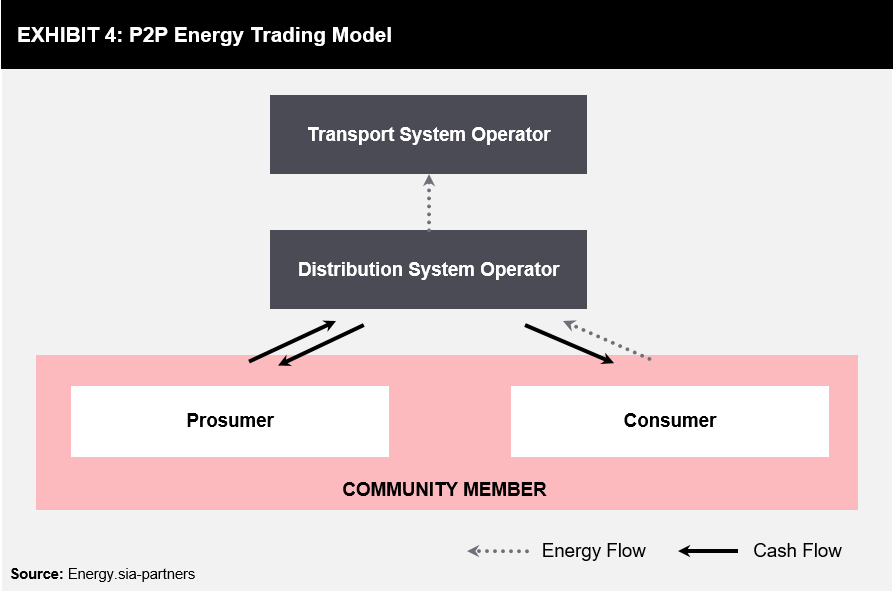 Considering the current status of the NEM mechanism, it has become important to consider the future structure of the NEM mechanism while Battery Energy Storage (BESS) and Electric Vehicle (EV) Charging, coupled with rooftop solar PV, are becoming an essential part of the overall system.

In the past, the pairing of solar-plus-storage with net metering has received minimal policy attention as energy storage has, until recently, seen limited deployment. With the current NEM policy, regulations, and eligibility guidelines for pairing rooftop solar PVs with storage systems needs to be revisited and defined in favor of market growth, especially for the developing markets. Factors such as the maximum solar PV capacity installation allowed for availing NEM facility and battery charging resource, as well as battery storage component that can or cannot export power to the grid, should be considered while restructuring the NEM policy.

In regions with Time-of-Use (TOU) rates, demand charges, or net metering compensation rates, BESS has the potential to provide monetary benefits to the system owner, allowing owners to store electricity during times of abundant solar generation and withdraw it from the storage system when grid electricity rates are higher.