Australia is expanding its emissions reduction policy from renewable energy to the deployment of CCUS technologies. Although, in the past, Australia has primarily focused on renewable energy as its emissions reduction tool, signifying a step-change in its viewpoint. CCUS is already gaining traction as a priority emissions reduction technology under the Australian Government’s Technology Investment Roadmap as well as the Federal Government’s acceptance of King Review recommendations for low-cost abatement technologies that would ultimately support investments in CCUS projects. 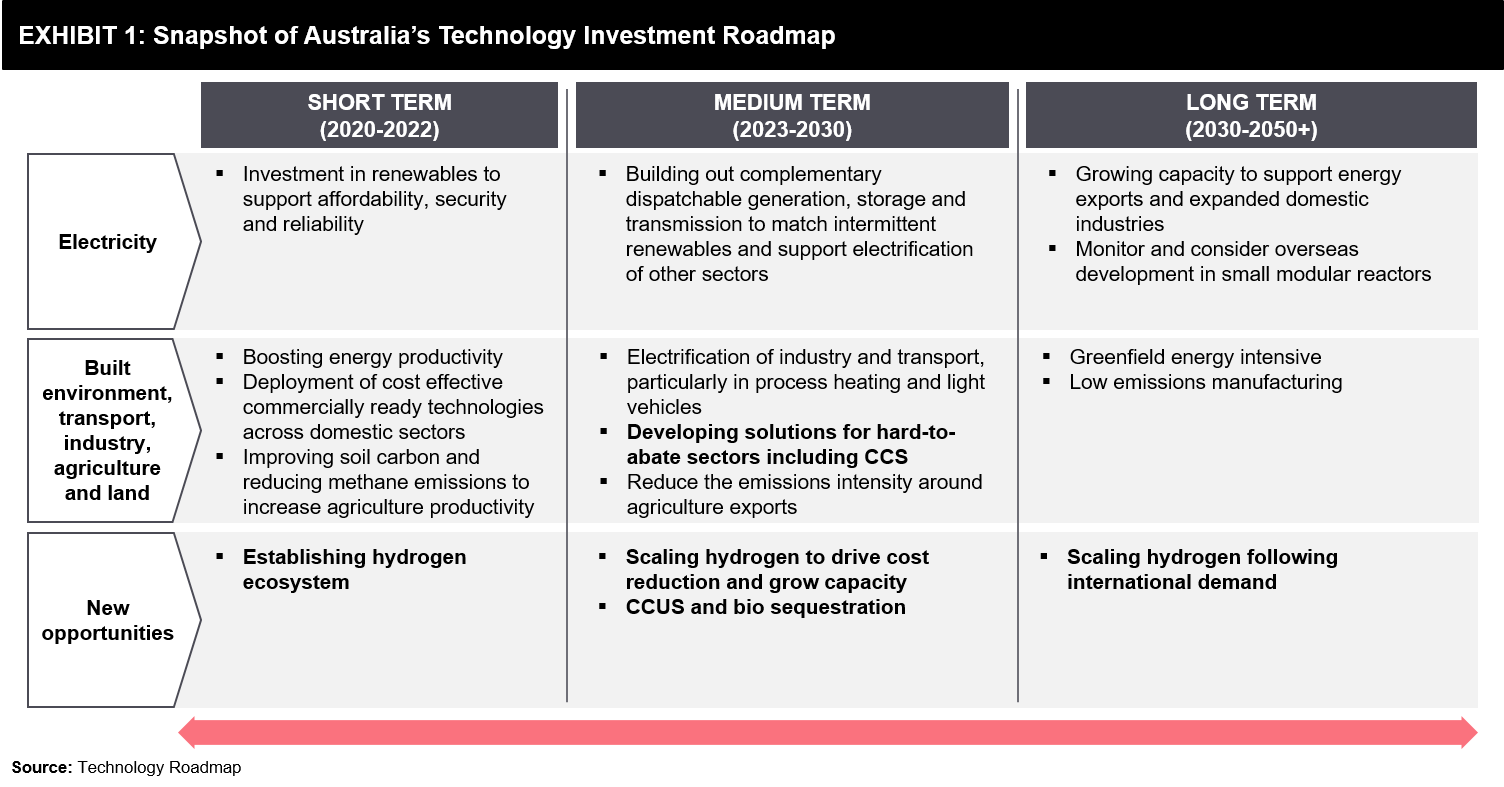 On 17th September 2020, the Australian government unveiled a USD 1.9 billion package for investments in new and emerging technologies, which includes a USD 50 million investment in a Carbon Capture use and Storage Development Fund, with this the federal government has reinforced its message that it’s time to move from renewables to CCUS, and P2X technologies. The CCUS development fund will support applied pilot projects located near the most prospective hubs that include Moomba (South Australia) Surat/Bown Basins (Queensland), Offshore Latrobe Valley (Victoria), Offshore Darwin (Northern Territory), Pilbara/Carnarvon Basin (Western Australia), and Browse (Western Australia). These projects aim to reduce emissions from power generation, cement, natural gas production, and heavy industries (e.g. chemicals and fertilizer production). The Australian Government has also invested USD 96 million in the CarbonNet project which will demonstrate the potential for a commercial CCS network in Victoria.

Australia is also targeting the development of a hydrogen-based economy – USD 50 million has already been invested by, both, the Australian and the Victorian Government as a part of the USD 500 million Hydrogen Energy Supply Chain Pilot Project, wherein hydrogen will be produced from the abundant brown coal resources in the Latrobe Valley, which will eventually be exported to Japan.

It appears that Australia is gearing to deploy CCUS technologies for industrial decarbonization. Given its significant storage potential (720 Gt) and highly skilled workforce, as well as its existing federal and state-based legislative and regulatory frameworks (a highly-ranked country in the world for CCS specific legislation), it is already on the right track.

The improved investment environment has contributed to a growing number of CCUS projects under development in Australia, including some of these large-scale CCUS projects:

Note: Large-scale relates to capturing of at least 0.8 Mt/year of CO2 for a coal-based power plant and 0.4 Mt/year for other emissions-intensive industrial facilities (including natural gas-based power generation).

Near-term opportunities for CCUS: The investment environment for CCUS in Australia has been improving, in particular, due to the increased policy support for low-cost abatement technologies. The Investor Group on Climate Change (IGCC) reported that Australia could unlock an investment opportunity of USD 63 billion over the next five years if it aligns its climate policies with a target of net-zero emissions by 2050. The report also highlighted that CCUS would emerge as a major investment asset class, with an estimated investment worth of USD 33 billion and USD 3 billion in green hydrogen production.

Recently, National Energy Resources Australia (NERA) and CO2CRC have announced a new landmark study into CCUS to assist the nation’s energy resources sector to reduce CO₂ emissions, and NERA CEO Miranda Taylor said: “Australia has an opportunity to make a significant reduction to its CO₂ emissions through CCUS; however, in the absence of an integrated study in Australia, the full potential for CCUS is difficult to ascertain,”.

Australia is creating market signals for CCUS, which provides an opportunity to tap emerging markets through bilateral collaboration, joint ventures, and M&As. Some of these signals are already stating a compelling story, worth pursuing:

Australia is well-positioned to play a leadership role in the development and deployment of CCUS technologies, along with, strong momentum for the hydrogen economy. This is expected to spur long-term stability for key stakeholders willing to make investments in these upcoming areas.

The federal and state governments have developed a national strategy for hydrogen on the fact that clean hydrogen could be produced using fossil fuels with CCUS or renewable energy, with options to further monetize the Power-to-X routes. The continued development of CCUS technologies at a commercial scale, since the launch of CO2CRC’s technology program, has provided a solid base for CCUS R&D in Australia, which is already poised to become a major global hydrogen supplier and P2X player by 2030.